Queen Mary, arguably the most regal looking and jewel bedecked consort, is known for her love of jewellery, and a magpie eye for Objets d’Art. We take a look at Mary’s route to becoming a prolific art acquirer, and her role in the Royal Collection.

Despite what you might think, Mary born into a family that consistently lived beyond its means. Though she spoke little of her childhood, Mary described her parents’ situation as frequently being up ‘Short Street’.

The rigidly upright consort, never seen in public without her hat and pearls, had in fact spent her early years as the daughter of a woman who would often go cap-in-hand to the Queen to ask for funds – requests which were frequently flatly refused.

Her arrival came at Kensington Palace in 1867, in the same room in which Queen Victoria came into the world. Princess Victoria Mary was nicknamed ‘May’ by her family, in honour of her birth month.

Her mother, Princess Mary Adelaide, Duchess of Teck, was a granddaughter of George III and therefore cousin to Queen Victoria. Mary Adelaide had an inability to control her profligate spending, and large charitable donations. And her father, Francis, the Duke of Teck, was little better.

Kensington Palace was where Queen Victoria and Queen Mary were born and raised. © Victoria Howard 2014

The Duchess had expensive tastes and – despite their modest family income – insisted on living an extravagant life, leaving a line of exasperated creditors in their wake. Mr Barker of Kensington, later the famed Barker’s department store was a long-standing victim.

It was “suggested” to the Tecks in 1883 that they should go abroad for a while, in an attempt to reduce their debts, as they could supposedly live a more restrained existence. They ended up travelling across the continent, taking up residence in Florence via Germany and Austria where they stayed with relatives.

In Florence, they were put up by generous benefactors, taking up the best rooms in the houses that had generously been laid on, with their owners often moving out to afford the family the luxury they were seeking.

It was here in Italy that the young Princess Mary’s embryonic love of art and architecture was ignited. She was captivated by her rich surroundings, frequently visiting churches and galleries. It was here she began to take her education seriously, and took lessons in literature and history, as well as languages.

A quieter, introverted foil to her mother’s gregarious character, Princess May was often on her own with her youngest brother Alge as the older two siblings were at boarding school back home. She would while the time away focussing on her ever-growing love of the arts.

The Tecks returned to Britain in 1885 and continued to split their time between Kensington Palace and White Lodge in Richmond Park, which the Queen had allowed them to use.

Her time in Italy had made its mark on Mary. Despite her ‘impoverished’ circumstances, Queen Victoria admired Mary’s steady character and considered her a highly fitting bride for her grandson, Prince Victor Albert (Eddy), the Duke of Clarence and second in line to the throne.

When he died unexpectedly in 1892, a betrothal to his brother Prince George was engineered after a suitable period of mourning.

Almost overnight, Mary was catapulted from a Princess on the fringe of the Royal Family, often snubbed by high society, to the future Queen of the United Kingdom, and its empire.

As Duchess of York, Princess of Wales and then Queen consort, Mary combined a reverence for the Royal Family – which had seemingly magically transformed her circumstances – with a longstanding appreciation for art, architecture and culture.

In her position at the heart of the Royal Family, she made it her mission to add to the Royal Collection. Her acquisitiveness led her to pressure aristocratic families and London antique dealers alike to contribute to her ever growing collections. She focused specifically on expanding the troves of antique furniture, jewels, miniatures and figurines, hoping to restoring lost items and expand the Royal Collection.

As she navigated her path as a senior Royal, she proved to be not only the best-read Royal of her era, but was also considered the most erudite. Possibly even to date.

Queen Mary’s intellectual curiosity made her a voracious reader, and she researched all aspects of current affairs, her patronages, engagements and countries she visited; a long-standing and deeply rooted love of India and all things Indian taking a life-long hold of her during her first visit there in 1905. She returned in 1911 for the Delhi Durbar as the first Queen and Empress to do so.

Mary would pay over and above the actual value of an item to acquire it, especially if it had royal provenance. She would much prefer to have bought a bad painting of a royal predecessor than a Titian or Canaletto.

There are, of course, enduring accounts of the Queen admiring objects during visits to friends or at parties, making clear that she would be pleased to receive it as a gift or purchase it for a nominal sum. Other stories suggest that Queen Mary would mention she had part of the same set that she would love to complete, or that these items were lonely without their kin..

Stories of these conversations spread among aristocrats and landed gentry, leading to some families hiding their most prized possessions from view during a royal visit to resist giving away these items to the magpie-eyed Queen.

Tellingly, neither Pope-Hennessey nor Hugo Vickers her biographers reference these stories.

These form some of the most famous of the Queen’s collectibles, now in the Royal Collection. Carl Fabergé the jeweller made 50 Easter eggs for Nicholas II the last of the Russian tsars, to give to his wife.

Three of them now form part of  the Royal Collection, thanks to Queen Mary who acquired them in 1933. The Mosaic Egg, one of the three, is a stunning artefact made with diamonds, rubies, topaz, sapphires, garnets, pearls and emeralds, and contains a ‘surprise’ medallion inside, painted with the portraits of the five children of Nicholas and Alexandra.

Other faberge items include a wide variety of Faberge animals, made of jade and quartz.

Amongst collectibles gifted to her is the famed Queen Mary’s Dollhouse. The dollhouse was created as a gift to her from the British people to serve as a historical document on how a Royal Family might have lived in 1921.

The idea for building the dollhouse originally came from the Queen’s cousin, Princess Marie Louise, who commissioned the idea with Sir Edwin Lutyens at the Royal Academy Summer Exhibition of 1921. Lutyens was one of the leading architects of the time and agreed he would create the miniature masterpiece.

Princess Marie Louise in the meantime used her connections in the arts and arranged for the most prominent artists and craftsmen of the time to contribute their particular skillsets to the dollhouse showcasing the finest and most modern workmanship of its time.

“It is built to outlast us all,” wrote A C Benson in his 1924 book about the dolls’ house. “To carry on into the future and different world this pattern of our own. It is a serious attempt to express our age and to show forth in dwarf proportions the limbs of our present world.”

The dollhouse was later put on display to raise funds for the Queen’s charities; almost two million people visited the British Empire Exhibition to view it. Now, it can be seen when visiting Windsor Castle, with its exquisite interiors, miniature books and even electric lighting and running water!

The Royal Family’s jewellery collection today is stocked largely thanks to splendid pieces that the Queen prolifically purchased them, as well as received lots of shiny gifts. It is difficult to conjure up an image of Queen Mary without her looking resplendent, bedecked in diamonds and pearls from her elaborately festooned stomachers, various garlands of necklaces and chokers topped off by a favoured tiara.

Less was most definitely not more in Mary’s case, and somehow she managed to pull the look off with aplomb making it her own. It was her uniform, in a way.

She commissioned a number of imaginative tiaras that are still in use today including Queen Mary’s Fringe tiara which can be “thriftily” worn as a necklace.

And yet perhaps the best known to the public is the famous Lover’s Knot (copied from one owned by her Cambridge grandmother, therefore also known as the Cambridge tiara) most frequently worn now by Kate, The Duchess of Cambridge. It is this same tiara that had been gifted to Diana, Princess of Wales, as a wedding gift by The Queen for her use in royal life. 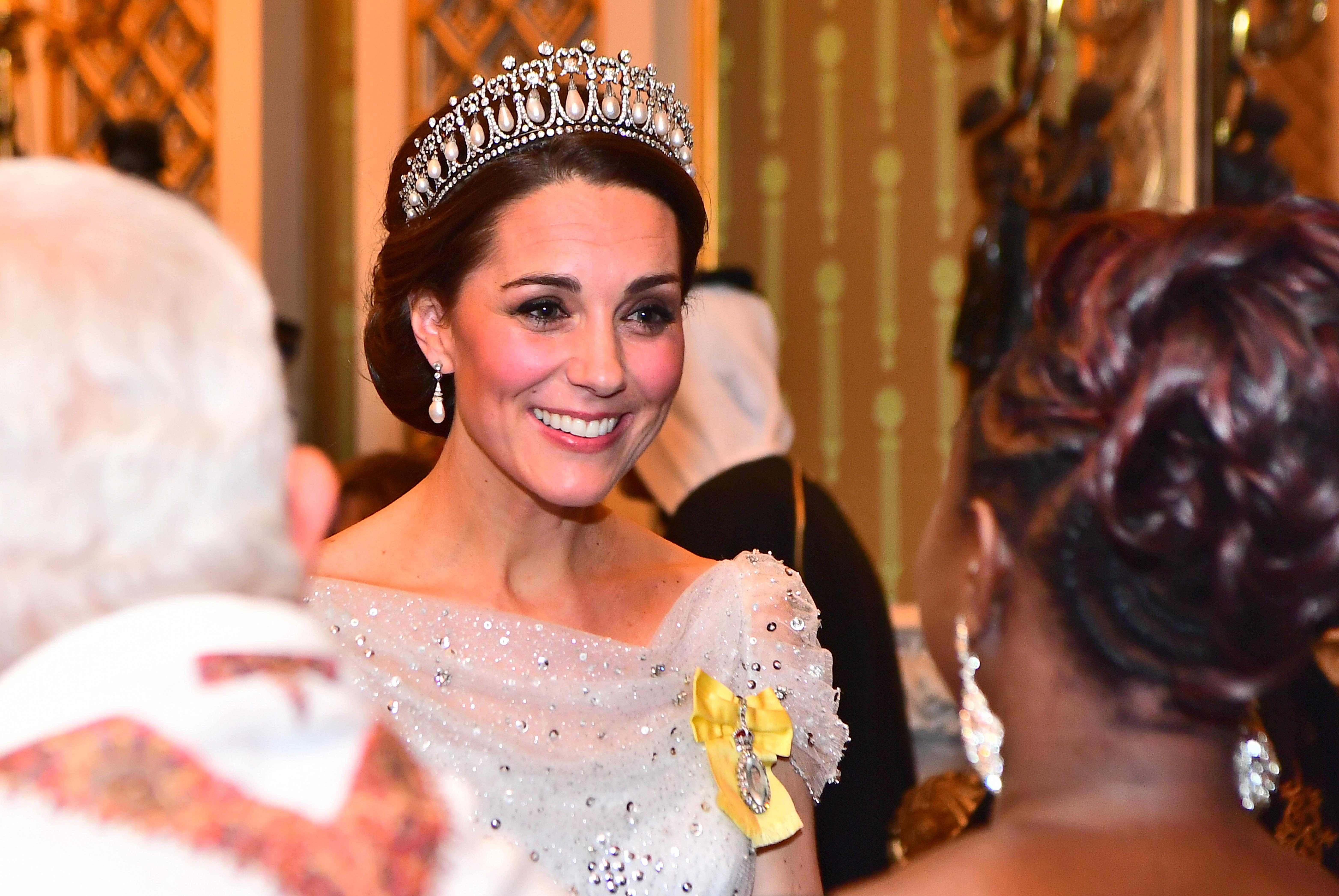 The Duchess of Cambridge talks to guests at an evening reception for members of the Diplomatic Corps at Buckingham Palace, wearing The Queens royal family order. Picture by i-Images / Pool

Queen Mary’s bandeau tiara was made for her in 1932, and is formed as a flexible band of 11 sections, set with diamonds and with a detachable brooch as its centre piece which has a further 10 diamonds. The brooch had been given to Mary as a wedding present in 1893 by the County of Lincoln. Meghan Markle wore this on her wedding day in 2019, becoming The Duchess of Sussex.

The Delhi Durbar Tiara was made in 1911 for her using diamonds from a dismantled tiara. She wore it for the eponymous event in India to mark George V’s and her coronation as Emperor and Empress of India, one of the only Indian coronations (durbars) to be attended by the Royals themselves instead of their representatives.

The tiara is now most-frequently worn by Duchess of Cornwall who had it gifted to her for use at royal events in 200, although we have only seen it a couple of times!

The Queen maintains her connection with her grandmother by wearing her extensive collection of brooches, tiaras and necklaces often.

Some of the most valuable of these are formed by the Cullinan diamonds collection which include the ironically named “Granny’s chips”, a name given to them by our current Queen when she inherited the Cullinan suite of diamonds from the Queen Mary in 1953 upon her death.

Queen Mary had loved the two diamonds and often wore them hooked together as a pendant brooch wearing them to various events from weddings to important state occasions.

The Queen’s intense obsession with collecting all things royal and bringing them into the Royal Collection extended beyond the valuable items that comprise it.

Whilst she nurtured close relationships with the antique dealers and art galleries of St James’s, she was equally intent on collecting anything that pertained to royal memorabilia and regalia and most of this can be seen at Frogmore House, forming part of the Windsor Estate.

Queen Mary’s taste and style of decoration are represented in her flower room with her assemblage of wax and silk flowers and her “Black Museum” filled with her collection of black papier-mache furniture. See some of the items in the Flower Room here, and the Black Museum here.

From 1925 until her death in 1953, Mary collected and arranged souvenirs and knick knacks that had belonged to the Royal Family in the house, describing it as a ‘family’ souvenir museum as well as a museum of ‘bygones’ and of interesting odds and ends.

Historic ‘Surveyor of The Queen’s Pictures’ role to...