Once we get over the excitement of a new royal engagement, the next thing we want to know about is the ring! While diamonds are arguably the most popular choice (Royals included), rich coloured gems like rubies and sapphires crop up quite regularly. Take a look at all of the royal engagement rings of the last century.

It took numerous proposals from the Duke of York to get the desired response from Elizabeth Bowes-Lyons, and it turns out she later eschewed her original engagement ring for an entirely different one!

The Duke presented the Earl of Strathmore’s youngest daughter with a Kashmir sapphire ring with diamond accents, one either side. Good photos of this particular piece have been very difficult to find, thanks to the camera quality of the day, and that she wore gloves most of the time, but you can see it was quite a considerable stone. This is from 1930.

As early as the 1930s, however, Elizabeth decided to exchange her engagement ring for a large pearl one surrounded by diamonds.

Perhaps the largest royal engagement ring in history, Wallis Simpson was given a huge 19.77-carat emerald ring for her engagement to Edward VIII.

Made by Cartier, the inside was engraved: ‘We are ours now 27.X.36’, representing the couple’s initials, and their engagement date – also the day her divorce was granted.

Originally with simple platinum setting, Wallis had it reset in a diamond leaf setting later on, which put diamonds around the base of the emerald, facing outwards.

After her death, the ring went to auction, and was sold along with the rest of her jewellery. The sale at Sotheby’s in Geneva, in 1987, caused a stir in the jewellery world: sales totalled £31 million, and set a new world record for the sales of a single-owner jewellery collection.

It was to one of his mother’s tiaras that Prince Philip turned for Princess Elizabeth’s engagement ring. In an early sign of his eye for design, Philip designed the ring; it features a large central brilliant-cut diamond, with stones pave-set into a triangular section of the ring, all set in platinum.

In reusing materials, he possibly mitigated the extravagant appearance at a time the country was in the throes of post-war recovery

This is a truly stunning and timeless piece, crafted by Philip Antrobus. 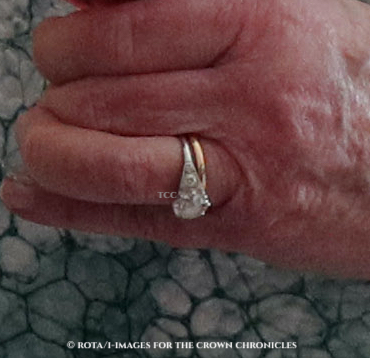 Antony Armstrong-Jones gave his royal fiancee a ruby and diamond ring, made to look like a rosebud honouring her middle name. The diamonds are set up to give the illusion of leaves, or petals.

Princess Margaret and her fiance, photographer Antony Armstrong-Jones, pictured at Royal Lodge, Windsor, where the newly-engaged couple spent the weekend.

Mark Phillips proposed to Princess Anne with a beautiful classic sapphire set between two equally sized diamonds. This made it quite the statement piece.

30th May 1973l PRINCESS ANNE AND CAPTAIN MARK PHILLIPS AT BUCKINGHAM PALACE, THE MORNING AFTER THEIR ENGAGEMENT WAS ANNOUNCED

The Princess also received a sapphire ring from her second husband, Timothy Laurence. This one is a blue cabochon stone flanked by three small diamonds on each side, set on a yellow gold band. It is a simple ring, given a lift of uniqueness with the sapphire – well-suited to the no-nonsense, low-maintenance Royal.

Whilst the proposal itself took place in Windsor Castle’s nursery, Diana chose the ring herself from a selection later presented to her by Garrard at Buckingham Palace. It features a uniquely coloured Ceylon sapphire, surrounded by a halo of 14 round diamond accents, set on an 18K white gold band.

In the ring’s design, Garrard was inspired by a sapphire-and-diamond cluster brooch that Prince Albert had custom made for Queen Victoria as a wedding gift in 1840. The Queen wore it on her special day as her “something blue.” It is a brooch still seen regularly on our current Queen.

It is variously said that she chose the ring because it resembled her mother’s, that she chose it because it sported the largest gem or that it matched her cornflower blue eyes. Whatever the reason, she loved it and wore it assiduously until her divorce.

Andrew turned to Garrard, as many members of his family had done, for his ring. He presented them with some initial sketches, when it was his turn to pop the question. He finally proposed to Sarah at Floors Castle, in the Scottish borders, when they were there for the weekend.

It is strongly reminiscent in style to Diana’s ring, with the central gem swapped out for an oval cut Burmese ruby, reportedly because it reminded Andrew of Sarah’s flaming locks.

Reports have also suggested that the Prince intended to give his fiancee an emerald ring, but she requested ruby instead.

Sophie, The Countess of Wessex – engaged in 1999

It was reported at the time of the couple’s engagement announcement that this was – to that point – the most expensive royal engagement ring, at an estimated £105,000.

Camilla, The Duchess of Cornwall – received in 2005

The striking art deco style ring Prince Charles used to propose to Camilla in 2005 once belonged to The Queen Mother. Featuring a fabulous five-carat emerald-cut diamond in the centre, it is flanked by three diamond baguettes, graduated in size, on each side.

The Art Deco piece is one of the larger engagement rings in the main Royal Family, and is often said to be one of the most valuable.

Camilla’s engagement ring was once The Queen Mother’s

Interestingly, Camilla also turns to The Queen Mother’s collection when it comes to tiaras and is frequently favours the Greville tiara.

It is no surprise that Charles has bestowed his grandmother’s heirlooms to Camilla. His special relationship with his beloved granny is well-known.

Autumn Kelly received a ring from Peter Phillips that featured a central oval stone, with another smaller diamond each side, and finally two baguette stones, as it leads into the band.

Sadly, the couple announced their separation, and intention to divorce, earlier this year.

Catherine, The Duchess of Cambridge – engaged in 2010

Prince William chose to giving his fiancee his mother’s engagement ring – his way of making sure his mother was part of the day, he explained in their engagement interview.

The Duchess of Cambridge’s sapphire engagement ring belonged to her late mother-in-law, Diana

When Diana died, Prince William and Prince Harry were given their mother’s jewellery to share between them. Harry chose her iconic ring, whilst William opted for her gold Cartier watch. When the moment came for William to propose to long-term girlfriend Kate Middleton, they swapped so that Kate could wear Diana’s ring.

In their engagement interview, William confessed to having carried the ring in his rucksack for three weeks whilst the couple travelled around Kenya with friends, as he waited for the right moment to pop the question.

It is thought that Catherine wore the ring on a necklace until the moment she was able to wear it on her ring finger – ie once the announcement was public.

Meghan, The Duchess of Sussex – engaged in 2017

In a throwback to his grandfather, Prince Harry also designed Meghan’s ring. Its central feature is an incredible five-carat cushion cut diamond, framed by two 0.75 carat brilliant diamonds from Diana’s personal collection – a way “to make sure she is with us on this crazy journey together,” Harry said.

The central stone originates from Botswana, reflecting the couple’s link to the country: it was the first place they holidayed together and a country Harry holds close to his heart.

Prince Harry and Meghan Markle’s wedding invites have been printed and sent out. Picture by Stephen Lock / i-Images

Whilst the ring originally had a plain gold band, this has now been swapped for a thinner, pavé-set band. The change was made at some point between Febraury and June, possibly after the birth of Archie.

With Jack proposing on their Nicaraguan holiday, Eugenie’s ring is very similar in style to her mother’s.

Princess Eugenie’s engagement ring features a unique three-carat oval brilliant Padparadscha sapphire (in a salmon pink tone) with a distinctive floral halo of round brilliant diamonds, and two pear shaped stones at the the flank; these total between two and a half, to three carats. They are mounted on a Welsh gold band.

At the time their engagement was made public, Jack said: “Why I loved it so much is it changes colour from every different angle that you look at it, which is what I think of Eugenie, that she changes colour, and it’s just so amazing.”

Whilst the proposal took place as the couple holidayed in Italy in September 2019, Edo had actually consulted Mayfair based jeweller Shaun Leane to design the engagement ring months before he proposed.

The central stone is 2.5 carats with two baguettes either side, which weigh 0.75 carats each. The claws holding the main stone are filed to a point, giving an edge to an otherwise classic design. Some estimates put the ring’s value as high as £250,000.

I’m so excited to announce my engagement to Edo pic.twitter.com/MvvwRRk0HT

“The diamonds are ethically sourced [from Botswana] and of the highest colour and clarity,” said Leane.

“What I wanted to do with him – because he had an aesthetic for art deco and Beatrice has an aesthetic for Victorian – we fused the two and mixed an art deco element with a Victorian element to the ring so that there was a fusion of their favourite aspects.”

It is one of the most beautiful royal rings, and its romance is added to, following the couple’s surprise nuptials earlier this month!