The Royal Review: the Royal Family’s other engagements 23-29th April

On a quieter week for the principal royals, members of The Queen’s extended family took on the majority of royal duties last week. There were various engagements for The Duke of York, The Duke of Kent, The Duke of Gloucester and Princess Alexandra.

Last Tuesday, Prince Andrew began his day at the Cambridge Centre for Smart Infrastructure and Construction, located in Cambridge’s Department of Engineering. As Patron of the Institution of Civil Engineers, The Prince spent his morning viewing a number of different research projects at CSIC.

After being greeted by Professor Lord Robert Mair, Head of CSIC and the current President of ICE, as well as Dr. Jennifer Schooling and Professor Simon Guest, The Duke was shown some of the latest research projects in deployments and smart infrastructure.  Andrew also enjoyed a demonstration about fibre-optic sensing, as he viewed the model of CSIC’s self-sensing bridge. The bridge was shown to Prince Andrew by Dr. Liam Butler and Dr. Matt DeJong, who explained that the model bridge included wireless as well as acoustic sensors. 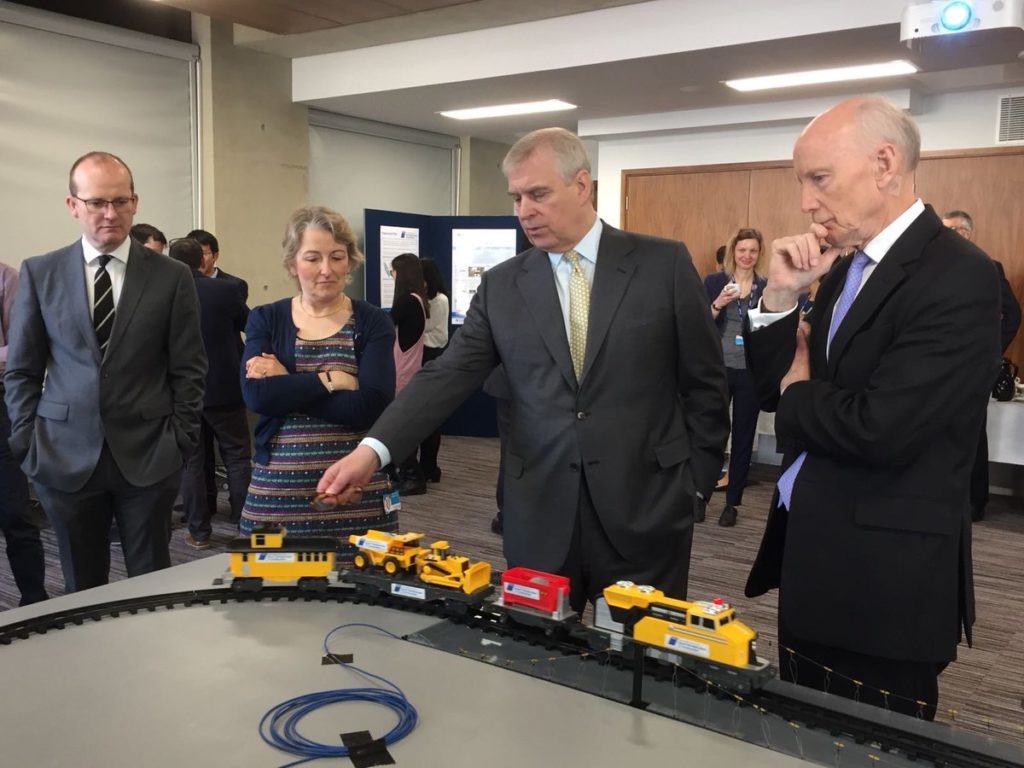 Prince Andrew is shown a self-sensing bridge model during his visit to the University of Cambridge. (The Duke of York)

Professor Lord Robert Mair said: ” We are delighted to welcome The Duke of York to CSIC and have the opportunity to showcase some of the innovations that are transforming infrastructure and construction. The team at CSIC have contributed to a number of pioneering projects, including Crossrail, that demonstrates how technology is creating Smart Infrastructure and driving industry change.” 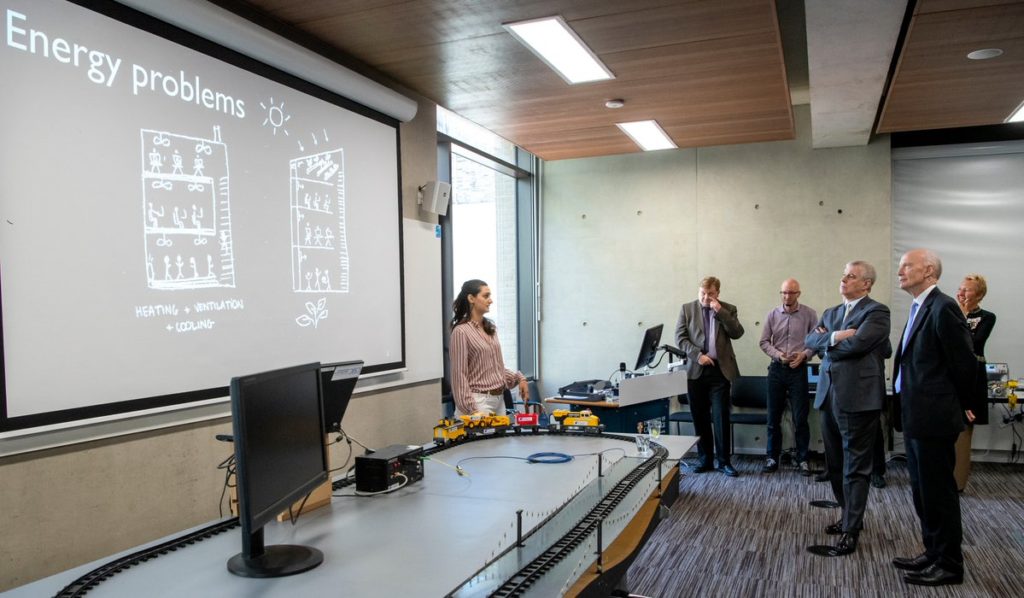 Next on Prince Andrew’s agenda was attending the official reveal of a plaque to mark the opening of Gresham Court, the graduate college’s newest housing accommodations. In addition to the unveiling, The Duke was bestowed an honorary fellowship by Hughes Hall. Andrew was awarded this accolade to recognize his work in encouraging entrepreneurship and business through a multitude of programmes, including his Pitch@Palace initiative, and also his support of the arts and education.

As he spoke to those gathered, Andrew said: ” Finding a college in the University to work with in the translation of knowledge to the real world is a huge part of what I am trying to achieve with Pitch@Palace and my other work. I hope as an Honorary Fellow, I can find other ways to add value.” 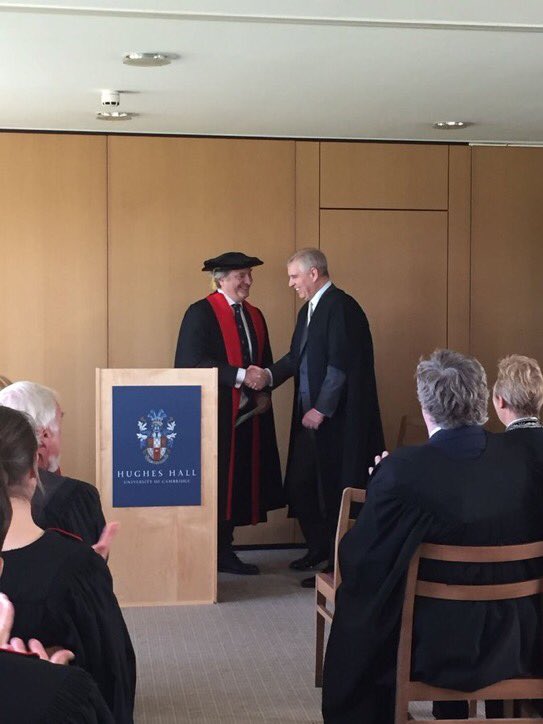 Duke of York receives an Honorary Fellowship at Hughes Hall. (The Duke of York)

Prince Andrew then moved on to the Cambridge Judge Business School, where he opened the Simon Sainsbury Centre. The new 5,000 square metre facility will unite the business schools’ activities under one roof, helping the students to continue to solve real-world problems not only with a greater diversity, but creatively too.

As he unveiled the Centre’s plaque, Andrew stated: ” I hope this building can transform more people from being students to the next generation of business leaders for this country.”

After already completing a full day of engagements, The Duke of York headed back to St. James’s Palace, where as Patron he hosted an evening reception for the British-Kazakh Society. The Society was created to promote the friendly and favorable relations between the UK and Kazakhstan. 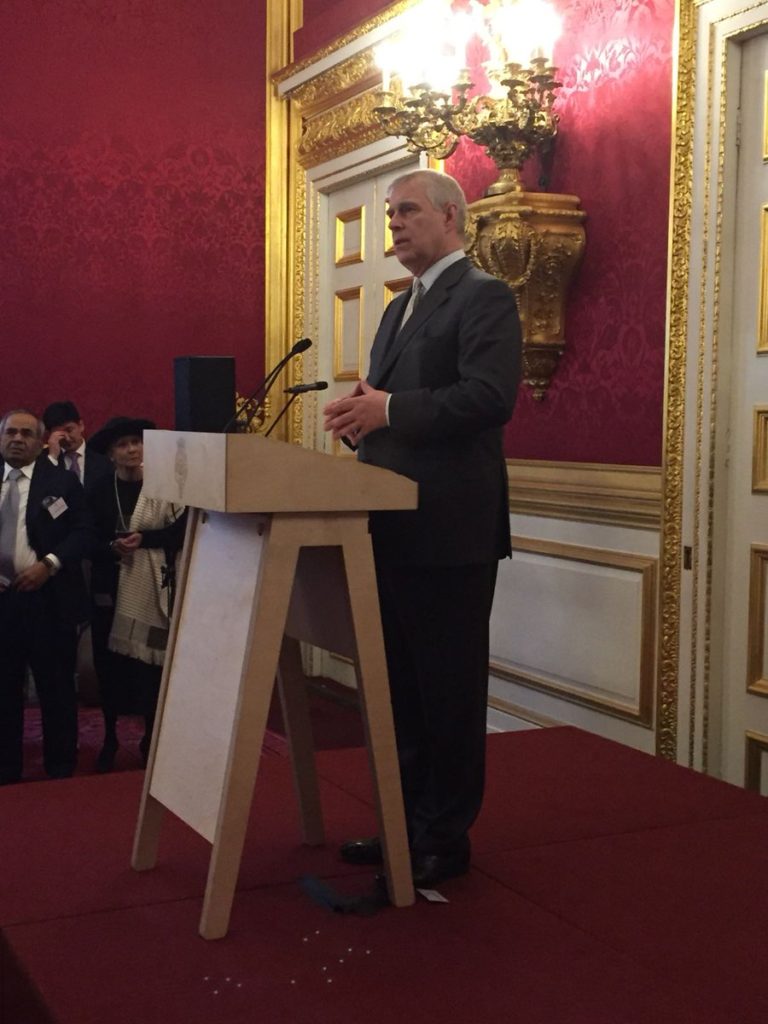 Duke of York welcomes the British-Kazakh Society at St. James’s Palace. (The Duke of York)

The Duke of York hosts events at Buckingham Palace

On 2nd May, Prince Andrew welcomed 40 finalists in the National Cyber Security Challenge’s CyberFirst Girl’s Competition to Buckingham Palace for an afternoon tea. This competition aims to engage girls in the field of cyber security, hopefully peaking their interest in this male-dominated field and encouraging them to eventually choose this as their career path. The NCSC consists of 170 challenges with varying degrees of difficulty, to be completed by girls aged 12 to 13. Over 4,500 girls competed in the challenges, with the top 10 teams invited to Manchester to compete in a live action final.

The victors were The Piggott School from Berkshire. Every one of the 40 finalists was invited to the reception at the Palace – quite a reward for coming in the top 1% of the entrants ! As he spoke to the winners, Andrew said: “CyberFirst is absolutely crucial to encourage girls to be at the forefront of cyber security. We do have a shortage of skills in this area, but this is an open field of opportunity, and all those standing in this room should recognize their capability and potential.”

The Duke of York then hosted a dinner at Buckingham Palace for The Place, London; Andrew is its long-standing Patron. As the leading centre for the development of contemporary dance performance and training, The Place is known for advancing the most innovative ideas which in turn, inspires not only their dancers but their audiences as well. As a result, they now play a major role in allowing their dancers to truly attain the pinnacle of their artistic potential.

On 4th May, The Duke of York visited another of his many patronages. After journeying to South Croyden, Prince Andrew was warmly welcomed at The Whitgift School by their Combined Cadet Force. Ranked amongst Britain’s Elite schools, the institution is nestled in a picturesque yet historic park and offers boys ranging from 13 through 18 an exceptional education in a serene, pastoral setting.

While touring the grounds, Prince Andrew opened the new Duke of York Water Garden. The Water Garden has a vast array of rare and intriguing creatures; along with the usual inhabitants (ducks, cranes and swans), there are a few unusual species as well, namely wallabies and flamingos! Prince Andrew planed a commemorative tree to mark the occasion. The Duke also spoke with the current Whitgift School Prefects about their school life at Whitgift. 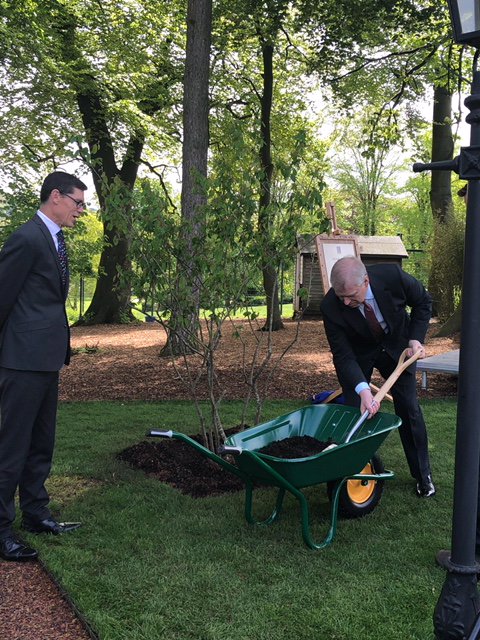 On 2nd May, Princess Alexandra opened the Worshipful Company of Skinners Almhouses at Percy Bilton Court. Ms. Maria Pedro, the Deputy Lieutenant of Greater London was on hand to greet the Princess. The retirement housing facilities are located on Skinners Lane, Hounslow, London and offer one bedroom flats with on site management in addition to Careline alarm service. Having been built in 1985, the much-needed renovations to these homes were undoubtedly welcomed and appreciated. We have no further information on this engagement.

The Duke of Gloucester spends the day in Leicestershire

On Wednesday, The Duke of Gloucester was in Leicestershire for a series of engagements. In the morning, The Duke  opened the new Kibworth Medical Centre, which opened its doors to patients in July 2017. During his visit, Prince Richard toured the facilities and unveiled a commemorative plaque to mark the occasion.

Later, The Duke celebrated the 21st anniversary of the opening of the Hinckley and District Museum in Leicester. The museum is housed in a range of former framework knitters’ cottages and tells the story of the hosiery industry and contains some examples of framework knitting machines.

NEWS | His Royal Highness The Duke of Gloucester @RoyalFamily has officially opened Kibworth Medical Centre. The Duke unveiled a commemorative plaque at the opening, before taking a tour of the facility and speaking to staff and patients. Read more: https://t.co/QTde1oqLu3pic.twitter.com/Wc4JABVsvv

The Duke of Gloucester meets the Keeper of the Royal Academy

Last Thursday, The Duke of Gloucester met with Ms. Rebecca Salter, who is Keeper of the Royal Academy. Ms. Salter is in charge of ensuring that the Schools deliver high standards of teaching. The Duke is Patron of the Royal Academy Schools, which was founded in 1769. The indepedent organisation offers a three-year postgraduate programme to an exclusive group of students. We have no further information on this engagement.

The Duke of Kent visits Wiltshire

On Thursday, the Duke of Kent spent the day in Wiltshire; the royal visitor arrived by helicopter. In the morning, Prince Edward unveiled the restored cap badge carved into the hillside at Buxbury Hallow, Salisbury, by the Royal Warwickshire Regiment. The carving has been restored 70 years after it has been originally created. It was carved into the hillside as a commemoration to the Regiment, who trained at local camps ahead of the Somme offensive in 1916. The Queen’s cousin was invited to the unveiling as Colonial in Chief of the Royal Regiment of Fusiliers, which is the successor of the Royal Warwickshire Regiment.

Congratulations to @suttonbadges for such a wonderful official opening of the #WW1 #RoyalWarwicks badge today. The badge looked stunning and the sun shone! I am very proud to be involved with this project and even met HRH the Duke of Kent! pic.twitter.com/6TOfOyhbJZ

Later, The Duke of Kent visited Wilton Carpets. The Duke previously visited the business 15 years ago, and returned last week to see how they have grown since then. Wilton Carpets manufactures bespoke axminster, tufted and wilton carpets for iconic businesses and buildings; the company is one of the only businesses in the UK which still designs and weaves wool-rich commercial carpets.

We were thrilled to welcome a very special member of the @royalfamily to our Wilton HQ yesterday afternoon. Almost 15 years since his last visit, HRH The Duke of Kent dropped by to see British manufacturing at its very best and how it has evolved over the years. pic.twitter.com/nD9LbNI0Wu

Olivia studied Business and Spanish at university and is now working in Spain. She has always had a keen interest in British history, particularly the Royal Family - Henry VIII and his crazy marital life being a personal favourite. Olivia also loves fashion, which means that The Countess of Wessex and The Duchess of Cambridge feature highly among her favourite royals. In addition to the British Royals, Olivia is also a big fan of the Spanish and Swedish Royal Families, particularly Queen Letizia and Princess Victoria.