Camilla, Duchess of Cornwall, was assisted in decorating the Clarence House Christmas tree with ill and underprivileged children and their families yesterday evening. 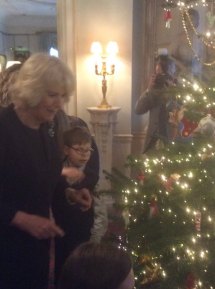 Now something of an annual tradition, those supported by Helen & Douglas House hospice, as well as The London Taxidrivers’ Fund for Underprivileged Children, visited Charles and Camilla’s London home for the task.

TAKE A LOOK INSIDE CLARENCE HO– USE

Using traditional felt and wooden decorations, along with edible cookie decorations, the youngsters, many with different needs and illnesses, brought the tree to life in the Library, a square room sitting between the Morning Room and Dining Room.

Helen House, Oxfordshire, was the world’s first children’s hospice, opening in 1982. Douglas House, nearby, opened in 2004, to cater to the needs of ill young people, aged 16 to 35. The two now work together, supported only by public donations to help improve end-of-life care and assist those with life limiting conditions. Camilla has been a patron since 2007, and spoke of the facilities: “It’s just such a happy place, isn’t it? You never know what to expect but it has the most uplifting atmosphere.”

One youngster began munching on a decoration, which worried his mother: “Orr picked up these Christmas tree biscuits and there were crumbs all over the floor,” Gina Barr-On said of her son, “but the Duchess told me not to give it a second thought. And she just laughed when he tried to drink out of the milk jug!”

A Welsh Guard, Captain Matt Wright, 29, assisted with putting the star on the top of the tree, using his sword.

The children received dinner too, in Clarence House’s dining room. It was served up by staff and Camilla herself, sausages and mash were on the menu yesterday.

HOW THE ROYAL FAMILY CELEBRATES CHRISTMAS

The Duchess, 68, is a grandmother of three and step-grandmother to Prince George and Princess Charlotte.

She was clearly in her element with the children, getting on the floor to interact with them, and putting the Welsh Guard’s bearskin on some of her young guests, making them giggle.

“It’s one of the most special things we do all year. I wouldn’t miss it for the world,” Camilla told a journalist. She recently had to miss the Diplomatic Corps reception, where Catherine attended her third white-tie event, due to back and neck pain.

The special guests of Clarence House were given goody bags to take home, including a large red Buckingham Palace tote bag. 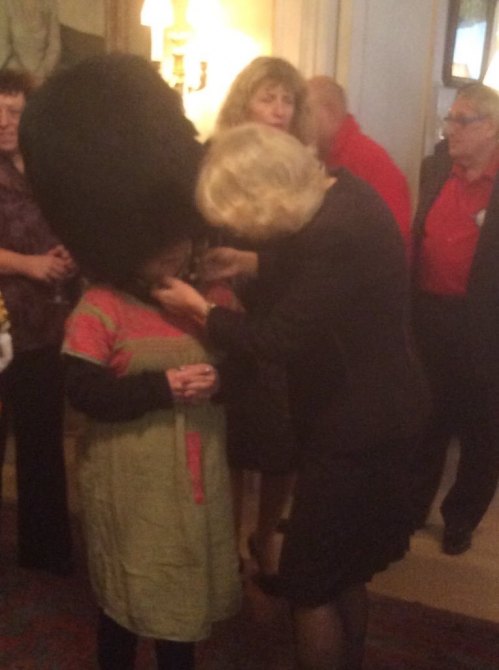