What we learnt from ‘When Ant and Dec Met the Prince’

What we learnt from ‘When Ant and Dec Met the Prince’

On Monday, ITV aired the documentary ‘When Ant and Dec Met the Prince: 40 years of The Prince’s Trust’ to celebrate the anniversary of Prince Charles’ charity. The presenting duo followed Prince Charles around for 12 months – and here is what we learnt.

To find out more about the man himself, Ant and Dec spoke to the people he is closest to – colleagues at the Trust and from his old Navy days. They revealed that Prince Philip came to visit just 10 days after Charles took command of minesweeper, HMS Bronington. Former shipmen described him as ‘very nervous’, but after a number of months, his mother, The Queen, came to visit and he was very different, having figure his role out.

Speaking to Charles himself, he revealed he was rather sea-sick on board, because minesweepers are ‘flat bottomed’ explained the Prince, and they get thrown around in the water. Not what we expected either!

It was with his severance pay from the Navy that Charles set up the Prince’s Trust, which has since gone on to help over 800,000 disadvantaged young people get into work or education.

Ant and Dec followed Prince Charles around for a year – and got behind the scenes access. ITV

Charles’ former seamen also added they thought commanding a ship and spending time with ‘all sorts’ of men cemented his idea for the charity.

The Prince described ‘funny little problems’ he was asked about as captain of the ship. One sailor had the name of his beau tattooed onto his hand – but had since swapped girlfriends and wanted to remove his ink.

The pair also joined the Prince on a number of official engagements: they visited the HMP Parc to see a football coaching programme ran by The Prince’s Trust and to Mark’s and Spencer, to see a work experience programme. Dec quipped in the furniture department: “Do you do a future king-size bed?”.

Ant and Dec even went to Scotland, dining and staying with Prince Charles at Dumfries House, which serves as something of an official Scottish residence. Their bedrooms were just next door to The Prince of Wales himself. At Dumfries, Charles revealed his singing skills – as well as his accents!

Prince Charles sings at Dumfries House – and proves he can hold a tune. (ITV)

Singing The Bonnie Lass o’Fyvie, Charles showed he could hold a tune, prompting the Geordie duo to applaud. Circulating the room of guests, the 67-year-old Prince stopped to chat with the pair, informing them members of the public had asked him where they were! His Scottish accent is pretty darn good, we must say.

During this production, Ant and Dec did a rare interview with Camilla, Duchess of Cornwall, at the couple’s home in Llwynywermod, Carmarthenshire in Wales – which you can rent, if you fancy it! She has never previously answered questions like this in front of the cameras. The Duchess described the energy that Prince Charles has and how hard he really works for the Princes Trust: “I think I’m really proud to be married to somebody who, 40 years ago, aged 27, had the vision to put it together – I mean it was an incredible idea then.

“For somebody – he was very young then – to think of it and to think of these very disadvantaged young people who had literally been to hell and back and to find a way to give them a second chance in life.” 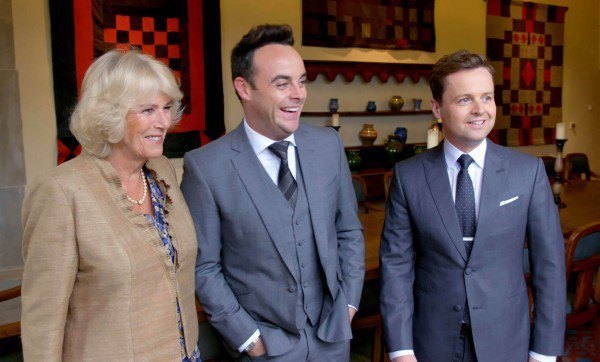 Endearingly, Charles referred to Camilla as ‘my darling wife’. ITV

Ant and Dec also visited Clarence House, Charles and Camilla’s London home, and even got to go to the Prince’s private cinema – which we weren’t aware existed. The pair got to see private films, including one of the young prince playing with his mother, then Princess Elizabeth. Another film showed Charles being invested as The Prince of Wales in 1969, showing a stark contrast – Elizabeth as a mother and as a Queen.

At Kensington Palace, the duo talked to William and Harry about their father and The Prince’s Trust. It was clear that the two were proud of their father’s work, and that he is something of an inspiration to them in their charitable endeavours.

The Duke of Cambridge said: “The Prince’s Trust evolved over time into what it is now, which is this incredible charity, that has really bust every possible limit it was ever set – it’s really done well.”

Both shared, funny experiences they had with their father. Prince William said a story of how his father laughed raucously when a pyrotechnic explosion went off at the wrong moment during his Christmas production.

The brothers, who appear to call their dad ‘Pa’, recognised the resourcefulness and font of knowledge that their father is. They did, however, refer to his poor handwriting. And then we found out the PRINCE WILLIAM SWEARS!

“At school we regularly swapped letters and said ‘I think I know what it says, but can you read it to me?'” Prince Harry said.

Then brother William commented – and dropped the B-bomb: “Just in case it was a b*****king we didn’t know about.”