On a rainy Wednesday, The Prince of Wales attended a ceremony to unveil the new national UK Police Memorial at the National Memorial Arboretum in Staffordshire. During the ceremony, he ‘recognised the unique contribution of British Policing to our country and across the world.’

The memorial commemorates the courage and sacrifice of members of the British Police service who have dedicated their lives to protecting their communities.

In a speech to the invited guests at the ceremony, Prince Charles said: “I need hardly say that I am proud to have had a close and enduring connection with the Police Service, long before becoming Patron of the National Police Memorial Day – a day that itself acts as a reminder of the true meaning of public service and the high price which is too often paid by police officers and their families for their dedication to duty.

“Ever since the earliest recorded death of an unknown Constable in 1680, approximately 5,000 men and women from our Police Service have died in the line of duty, notably 221 since the turn of this century.”

The Prince of Wales is attending the dedication ceremony of the new national UK Police Memorial.

The memorial at the National Memorial Arboretum in Staffordshire commemorates the courage and sacrifice of members of the UK Police service. pic.twitter.com/PM6qh1kZ1u

— The Prince of Wales and The Duchess of Cornwall (@ClarenceHouse) July 28, 2021

The future King  also offered his thoughts and condolences to the invited guests, who had lost someone whilst serving in the police.

He said: “To those of you with personal experience of the sudden, unexpected and tragic loss of someone in the Police Service, whether you are here today, viewing from home or attending one of the many services within your constabularies, I can only offer the assurance of my most heartfelt thoughts and prayers.”

Charles continued: “On behalf of the nation, I would particularly like to express my profound gratitude for the valour and sacrifice of those who have laid down their lives to keep us safe; to remember their families who mourn and to recognise those who continue to serve in order to safeguard our freedoms.

“Whilst our expressions of appreciation will always be hopelessly inadequate and, unfortunately, make the anguish no easier to bear, I do pray that this Memorial will not only provide a hallowed place for us all to pay tribute to each of them, but also the reassurance that those who have given their lives so selflessly will leave a lasting legacy and will never be forgotten.”

As patron of the National Police Memorial Day, Prince Charles laid a wreath in honour of those who have dedicated their lives to protecting the public. HRH unveiled a plaque at the monument, which commemorates almost 5,000 police officers and staff who have died whilst serving in the Police Force. He also spent time meeting with officers, bereaved family members, and representatives from policing charities. 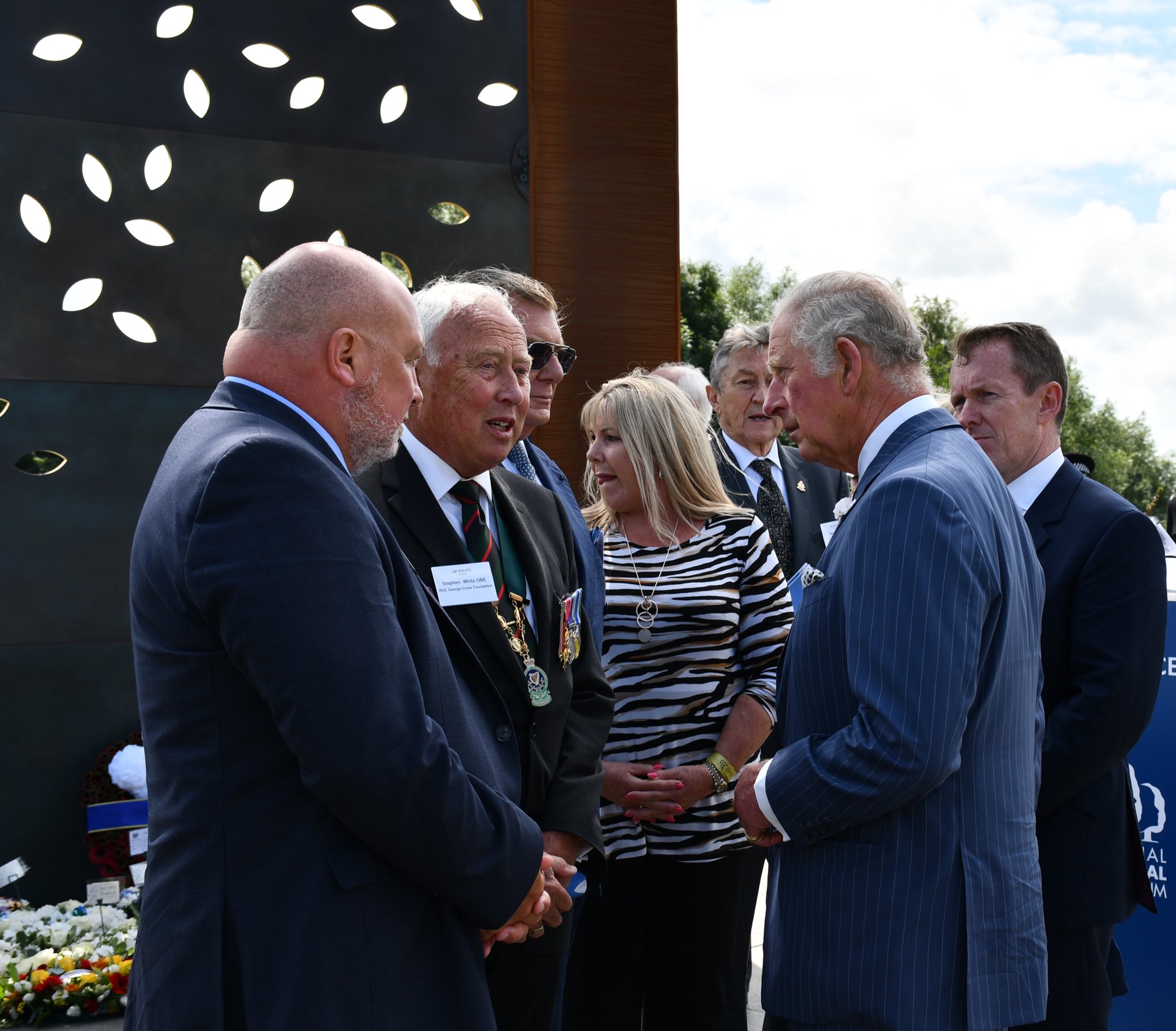 Prince Charles spoke to the families of those who have been killed on duty. (@Clarence House/Twitter) 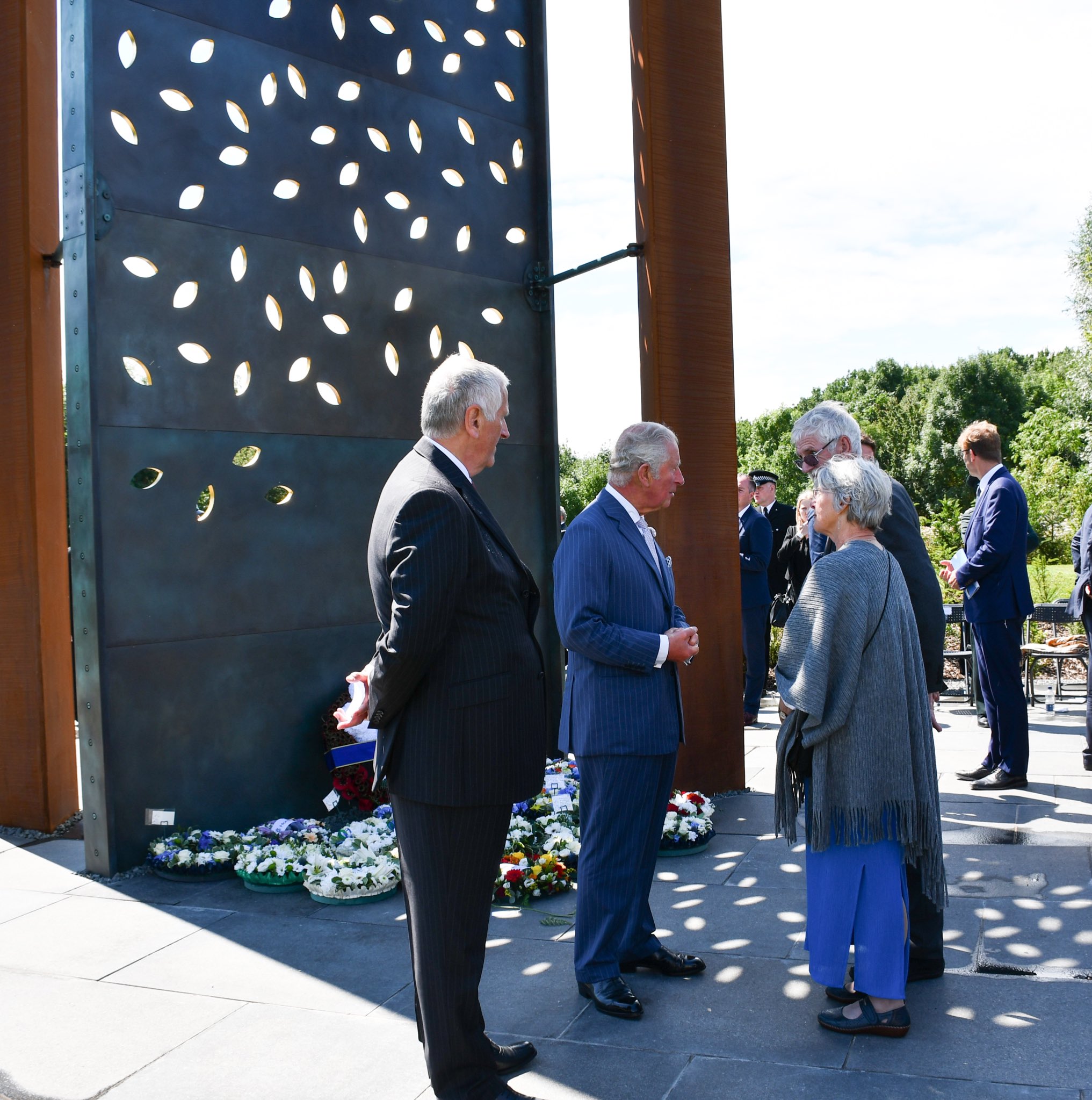 HRH took the time to speak with representatives from a number of policing charities. (@Clarence House/Twitter)

The memorial site consists of a raised embankment, marked by a simple circle of field maple trees. In the area created within this bound, is a 12-metre-high brass structure, known as the portal, which sits on a leaf-shaped stage. The structure represents the threshold to the dangerous places where the police must go, but sadly, some will never return. The leaf-shaped apertures cut from it signify service, sacrifice and particularly lives lost.

Families of police officers who have been killed on duty were among the invited guests to the ceremony, as was Prime Minister Boris Johnson, Home Secretary Priti Patel, Metropolitan Police Commissioner Dame Cressida Dick and chief constables from forces across the country.