This morning, The Duchess of Cornwall joined BBC Radio 2 presenter Chris Evans at Hampton Court Palace for the final of the eighth 500 Words writing contest, which is aimed at encouraging creativity in children.

The Duchess arrived in style at Hampton Court alongside the Radio DJ, with the pair enjoying a ride in the famous car from ‘Chitty Chitty Bang Bang’. As they entered the famous Palace (well-known for being home to King Henry VIII), Camilla and Chris waved at the crowds who had gathered to watch the final, which was broadcast live this year for the first time. 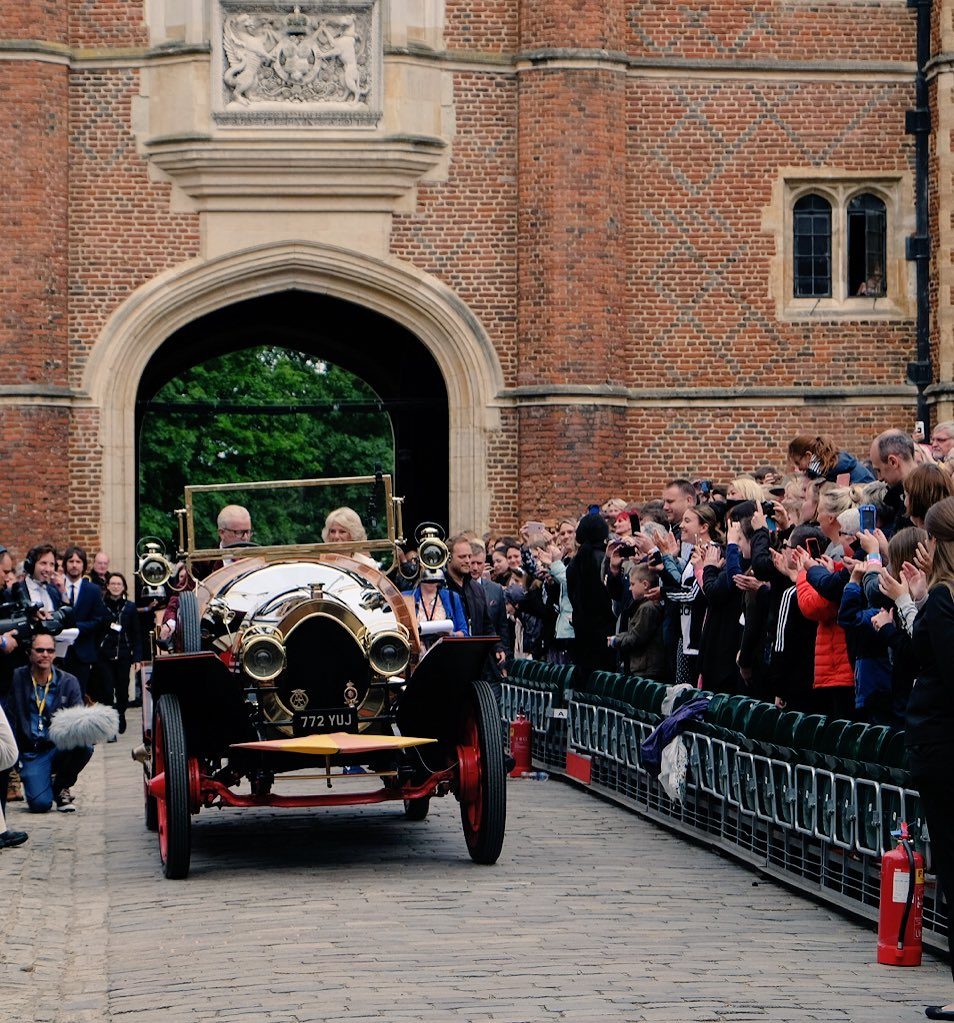 Arriving in the famous car, Chris Evans asked the royal guest for a rendition of the car’s namesake song, made famous in the 1968 Dick van Dyke film. Camilla, however, laughed off his suggestion, claiming that: “I cannot sing a note!”.

The 500 Words writing competition has met with growing success ever since it was launched by Evans; The Duchess has supported the contest for the past four years in her capacity as an Honorary Judge. Camilla even lent her image to an animated cartoon encouraging children to enter the contest. The Duchess of Cornwall is known for her work in promoting childhood literacy; she apparently enjoys reading stories to her own grandchildren as well – although Prince Charles is much better at putting on voices!

This year, the winning stories were read aloud by various celebrities, including comedians Dara O’Brien and David Walliams, as well as Harry Potter actors Jason Isaacs and Jim Broadbent.  The contest is divided into two age categories: for children 5-9 and children 10-13. The panel selected three finalists and one winner in each age category, with prizes as follows:

“It is a huge pleasure to be with you all today – and to have travelled here in Chitty Chitty Bang Bang, the magical car from one of my favourite stories was a very special treat. Those of you who have seen the film might remember the slightly bonkers character of Grandpa Potts. Well Grandpa Potts has some very good advice that I want to share with you this morning. His advice is, ‘Never say no to adventures. Always say yes, otherwise you’ll lead a very dull life’. I want to encourage everyone here to keep reading, to keep writing and keep saying a big fat yes to adventure.”

As well as the books, the prize winners were also treated to a ride in Chitty Chitty Bang Bang, alongside The Duchess and Chris Evans. The children and the two adults appeared to be having a great time as they sailed around the Hampton Court Palace in the famous vehicle. At a later date, the winning stories will be read on BBC Radio 2.

The #500words competition winners join The Duchess of Cornwall and @achrisevans for a drive around Hampton Court Palace on Chitty Chitty Bang Bang pic.twitter.com/bkGQZ8bWTq

The duchess of cornwall looks fantastic.