Prince William has spoken of Prince George’s excitement about Christmas, saying he ‘will be bouncing around like a rabbit’.

In an interview for The Big Issue, The Duke of Cambridge revealed that 2-year-old George has ‘suddenly worked out what Christmas is all about,’ so will be ‘extremely bouncy’ on 25th December. 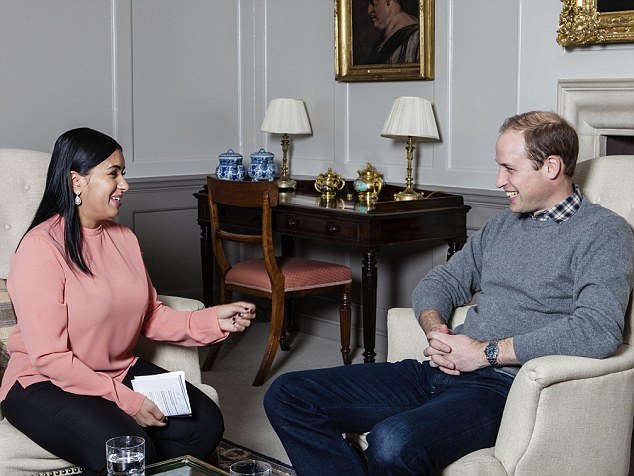 William speaks to the trainee journalist after making a promise in 2011. Louise Haywood-Scheifer/Big Issue

“If I get any sleep on Christmas Eve it’ll be good!” William exclaimed.

Sophia Kichou was promised the interview by William back in 2011 – when she was homeless. The 24-year-old trainee journalist met the Duke through Centrepoint, the charity of which he is patron. Ms Kichou explained her hopes to the Prince four years ago, and he promsied her a scoop if she got herself into journalism.

“So, you’re to Paxman me?” the Duke joked to Sophia, who interviewed him late in November.

This will be Princess Charlotte’s first Christmas, and it is thought the family will spend the day not with The Queen, but at Anmer Hall with Catherine’s family, the Middletons. The day will begin with church though, as every year.

“We’ll go to church as a family on Christmas Day, as we always do,” William, 33, explained.

“Then we’ll watch George try to tackle his presents as he tries to unwrap them. It’s a very different experience at Christmas, having a family of your own.

“It’d be nice if we got a white Christmas because we haven’t had one in many years.”

He added: “So that will be two children, one who suddenly appreciates Christmas, which could be quite challenging. But I’m looking forward to it.”

Conducted at Kensington Palace, images show William looking relaxed in a grey jumper and check shirt, with jeans and desert boots. Sophia, a final year journalism student at City University in London, said: “He is obviously a prince who keeps his promise. He said he would give me an interview and he did.”

Ms Kichou became homeless aged 18 after her mother died; Centrepoint, which William’s mother, Diana, was also a patron, helped her get her life back on track.

The father-of-two also opens up about his time as an air ambulance pilot, and how he thinks youth homelessness can be tackled.

This edition of The Big Issue is released tomorrow, where you can read the interview in full.