Latest posts
Ceremony of the Keys welcomes The Queen back to Scotland
Duke and Duchess of Cambridge mark Children’s Hospice Week 2022
Artist captures ‘relaxed and approachable’ William and Kate in first joint portrait
Kate in camo – Duchess of Cambridge marks Armed Forces Day
Prince George raises money for animal conservation charity with a cake sale
Prince William and Kate unveil Windrush Monument at Waterloo
Canterbury Cross for The Queen marking 70 years’ service to the Church of England
How Prince William has evolved from reserved young Royal to confident future King
Prince William at 40: the importance of tackling homelessness
Camilla in Vogue: royal life is ‘not easy’, spoiling her grandchildren & her love of Wordle

The Duke of Cambridge has given an interview to Gary Lineker ahead of the FA Cup Final on Saturday.

Prince William, President of the FA, was interviewed at his home of Kensington Palace by the Leicester-born ex-footballer, and spoke about his passion for football, and where he thinks his children’s loyalties will lie as they grow up. You can watch the interview below. 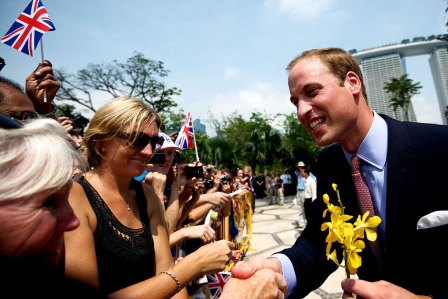 BBC One will air the interview at 5pm on 30th May, shortly before the match begins.

The Duke will be handing out the winner’s trophy at the match, and admits he is worried to see his team, Aston Villa, take on Arsenal in the final.

He said: ‘I’m nervous now. I’m terrified. I’ve had plenty of Gunner fans come up to me and say, just you wait next week.’

‘I think it’s been an interesting season for Villa, the last two seasons have been quite hard work, being close to relegation. The guys have battled through, they’ve done seriously well. And I’m really excited about Tim’s leadership, he’s doing a really great job with them,’ the Duke said of his team’s recent form.

‘Aston Villa has always had a great history,’ he continued. ‘I’ve got friends of mine who support Aston Villa, and one of the first FA Cup games I went to was Bolton v Aston Villa, back in 2000. It was a semi-final, which sadly Villa then went on to lose against Chelsea.’

William is clearly passionate about his football: ‘[…] It was fantastic, I sat with all the fans, I had my red beanie on, and I was sat with all the Brummie fans and had a great time. It was just the atmosphere, the camaraderie, and I really felt that there was something I could connect with.’

William, appears sitting on a bench with Gary Lineker, and talks about his children, and their football loyalties, too. When asked when Prince George would attend his first match, he said this:

‘I don’t know, I’ll have to pass that by the missus [Catherine], see how I can get away with it! At the moment, being only 22 months, it’s a little bit early.’

He does, however, want his son to support his team: ‘The responsible thing would be to say, to let him make his own mind up, but I think I might be quite biased. I haven’t quite worked out how to play that yet… But, of course he can support whoever he wants, but if he supports Villa, it’d be fantastic. I’d love to go to the odd match with him in the future.’

The Duke thinks it more likely that his daughter, Princess Charlotte, will support the Midlands team than George.

‘It’ll probably end up being that Charlotte is the Villa fan, and George will go and support someone else!’

Prince Harry is known to be an Arsenal fan (so there may be some private brotherly banter on Saturday), and it is thought The Queen is too.

The 32-year-old Prince was quizzed on his choice of team, being born and living in London most of his life. ‘I didn’t really want to follow the run of the mill teams, and I wanted to have a team that was more middle of the table, that could give me the more emotional rollercoaster moments – to be honest, now looking back, that was a bad idea [laughs]. I could have had an easier time.’

His friends were mostly Chelsea or Manchester United fans at school.

Mr Lineker asked William what he would like to change about the game, and he replied: ‘I’d like to see racism stamped out.’

The interviewer said this about the time he spent with the Duke: ‘It was fascinating to spend some time with The Duke of Cambridge and hear more about his passion for the game. He is genuinely excited about the Cup Final and it’s great that we can showcase his enthusiasm for Villa to the Match of the Day audience.’