The Earl and Countess of Strathearn, as the couple are known in Scotland, attended an anti-bullying seminar and a family fun day, as well as meeting with young people faced with mental health issues at the Dundee Repertory Theatre.

Just a few weeks ago, the couple spent the day talking to youngsters who have suffered with mental health problems, including attempted suicides and depression. It seems this is a cause they want bringing to the fore, in order for mental health to no longer be an issue or taboo to speak of.

Will and Kate spent last night in St Andrews, the location of their university, revealed Kensington Palace. No doubt they were reliving some of their carefree youth in the city.

To begin the day, they briefly said ‘hello’ to the waiting crowds outside the theatre, with the Duchess opting for a a Royal blue coat and kilt (!) by Scottish designer, Chrisotpher Kane.

They then went to talk to those inside. The Duke and Duchess of Cambridge spent a lot of time with one group of youths and families discussing the problems they have faced with their mental health.

These people and families are benefitting from the work of mental health charities in the area.

The couple chat with youngsters about mental health. Victoria Murphy

Next, the Duke and Duchess stopped to speak with performers on the stage as part of the family fun day. They spoke with the cast and crew of the play ‘In Her Shadows’, currently at the theatre; it is a visual performance that explores a young woman’s relationship with her depression – and highlights the stigmas surrounding the illness.

Whilst chatting with families during the activity, William and Kate asked about dancing:

“They were very friendly and asking a lot of questions about the group,” said Claire Wallace, 33, who had taken her 2-year-old daughter to the event. 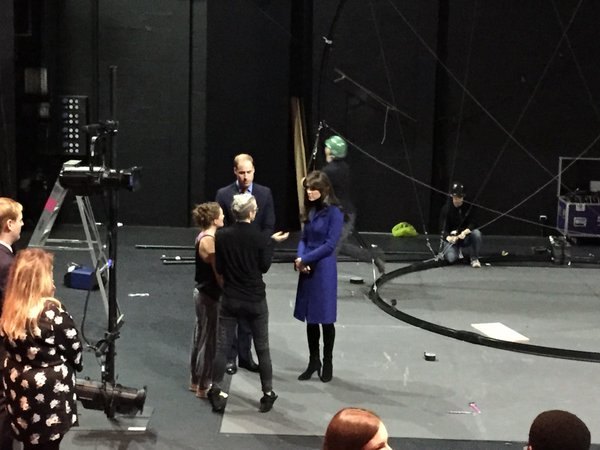 “They said yes, the Gay Gordon’s, the Dashing White Sergeant and Strip The Willow. Kate said ‘We weren’t very good’.”

One guest asked Catherine if her husband was still riding his motorbike. She said that it ‘fills me with horror’.

“He’s still riding it,” the Duchess said. “It always fills me with horror when he goes out on it‎. I’m terrified. Hopefully, I’m going to keep George off it.”

Eight-year-old Evie Walker spoke to William about school and the theatre: “He was asking me what I like at school and what productions I have seen at the theatre and I said I like maths and I’ve seen James and the Giant Peach and the BFG.

“He said that he didn’t like maths. It was cool to meet them but I was kind of scared.”

The couple left shortly before 12:30pm, to head to an anti-bullying workshop. The Corner is an institution which runs a drop-in centre for teenagers wanting advice on issues like contraception or exam stress, and peer-led and outreach services.

William asked whether they thought social media companies did enough to prevent bullying online, and he was told they feared that the introduction of a dislike button on Facebook could be a disaster.

The father-of-two also reference his job as an air ambulance pilot.  ”I don’t know why there are legal highs.

”We have been called out when people are having fits or cardiac arrests after taking them.”

The Royal Couple later toured explorer Captain Scott’s ship, built in Dundee for his 1901 Antarctic expedition with Ernest Shackleton. William and Kate took the helm of the ship, taking in the view.

On board, they took a tour and recognise winners of a UK-wide Bafta game design competition for children and teenagers.