Read our latest posts
‘A world without books is unimaginable’ Duchess of Cornwall says on World Book Day
Books give me ‘reassurance’, says Princess Beatrice in blog for World Book Day
Duchess of Cornwall visits Croydon vaccination centre & says Prince Philip is ‘improving’
Countess of Wessex announces winner of Queen’s Award for Design & talks her own style
‘It might be quite alarming’ – Queen jokes statue of herself in Adelaide will scare locals
Prince Philip transferred to St Bart’s for cardiac tests & further treatment
Prince of Wales shares ‘profound’ appreciation for Royal Mail workers
Prince William and Kate show support for vaccines in call with vulnerable Brits
St John’s vaccination group gains new volunteer: The Countess of Wessex
Queen encourages people to have Covid-19 vaccines – it ‘didn’t hurt at all’ she says
Home Jewels and Jewellery The Queen’s Jewellery: Prince Albert’s sapphire brooch
Jewels and JewelleryRoyal Fashion

This sapphire brooch features a large oblong sapphire surrounded by 12 diamonds. It is set in gold. A very simple piece, it was worn by Queen Victoria on her wedding gown, as a gift from Prince Albert the day before the ceremony. He also gifted his Victoria four fans, according to Leslie Fields. The wedding took place at St James’s Palace in the Chapel Royal in 1840. 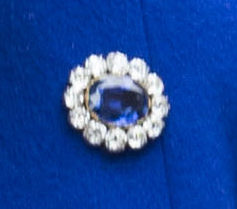 It has been passed down by generations of Queens since Victoria’s day, and now belongs to Elizabeth II. Her Majesty likes this brooch, as she wears it a lot, including to Prince William’s christening in 1982; as stated previously, The Queen wears her favourite pieces to important family events.

The Queen tends to wear the brooch with blue outfits, a shame as a white background would really make the piece stand out.

Princess Anne has a similar brooch, see below, which according to Suzy Menkes, was another that came from Prince Albert, as he had similar ones made for his daughters; she says The Queen bought it for her own daughter when it came onto the market.