The bones of Tsar Nicholas II and his wife Empress Alexandra of Russia, who were murdered by the Bolsheviks in 1918, have been exhumed in a reopening of their murder case.

Their bodies, which lay in a tomb in St Petersburg, have been removed for new tests to persuade the Russian Orthodox Church that bones are those of the last Romanov rulers. 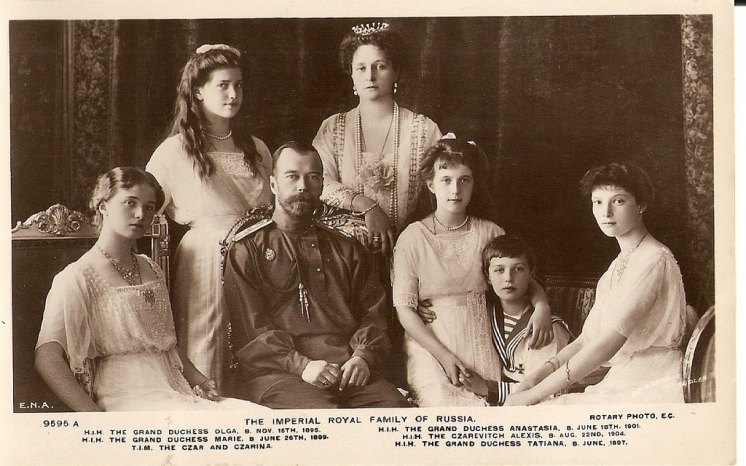 The Romanov family were murdered in 1918

Churchmen wanted the tests to be carried out on the skeletons, before they rebury them alongside the remains of Crown Prince Alexei and his sister Maria.

Nicholas II, grandson of Queen Victoria, abdicated in 1917, and he and his family were shot to death by the Bolsheviks. Nicholas was shot several times in the chest; Anastasia, Tatyana, Olga, and Maria survived the first hail of bullets, likely due to their clothes being laden with diamonds and gems, protecting them from the initial shots and bayonets. They were then stabbed with bayonets and shot at close range in the head.

It is thought the reasoning behind the massacre was the Imperial family posed a threat to the new Lenin government.

Some Orthodox leaders have questioned the legitimacy of the claims that the bodies belonged to the last Imperial rulers of Russia, even though DNA research undertaken by separate Russian, British and American scientists proved to match living Romanov relatives, including Prince Philip, Duke of Edinburgh.

“People have questions. We want further investigation so that any tests are done in the presence of church officials,” Chaplin said. “These people have been canonised, and if their remains are found they will be considered holy relics that believers will pray to. For this reason it’s very important to make sure.”

After they were killed, the bodies of the 50-year-old tsar, his empress Alexandra, 46, and three of their children (Olga, 22, Tatyana, 21, and Anastasia, 17)  were buried in mineshafts Yekaterinburg, the Urals. Youngest children, Alexei and Maria, were buried elsewhere.

In a ceremony attended by Prince Michael of Kent, the bones of Nicholas and Alexandra were reinterred at Peter and Paul Cathedral, St Petersburg in 1998. Funeral rites were read by the President, but he avoided saying their names during the ceremony.

In 2007, bone fragments were found, and after testing, were revealed to be those of Alexei and Maria. Since then, they have been kept in a state repository awaiting burial.

In June, claims were made that the Russian government are seeking to reinstate the Romanov line, when an MP sent letters to the descendents of the house.

‘It is necessary to carry out the exhumation of remains of the Emperor Nicholas II and the Empress Alexandra Fyodorovna located in Peter and Paul’s Cathedral in St Petersburg,’ said a statement from Russia’s Investigative Committee, who is overseeing the case.

Very interesting
Researching my husbands DNA and it appears ge is connected to the ROMANOV family somewhere and king augustus of pOland.
WouLd be INTERESTING to know if royal family haS done their ancestry dna.