George III and his ‘madness’ – what caused it and how did it affect his job?

From an early stage in his reign (1760-1801), George had mild bouts of poor mental health, but they began to become frequent and longer, starting in 1788. Many think it was porphyria, a hereditary physical disorder where there problem with the production of haem, which makes haemoglobin, found in the red blood cells to transport oxygen around the body.

Recent evidence found when analysing George’s letters have suggested, however, that he suffered from bipolar disorder; the King’s sentences became longer, and language more colourful when he was ‘mad’: a sentence containing 400 words and just eight verbs was not unusual in some of these writings. Such features can be seen today in the writing and speech of patients in the manic phase of a psychiatric illness.

George III’s medical records show that he was given gentian-based medicines. This plant is still used today, but can turn the urine blue, likely leading modern historians and doctors to believe the Hanoverian King suffered from porphyria.

Some evidence that supports this diagnosis is the presence of arsenic. Samples of George’s hair were examined in 2005 and revealed high levels of the poison, which is a possible trigger for the disease of porphyria. The source of the arsenic is not known, but James’ Powders, a common medicine, was regularly given to George.

George had ‘an episode’ in 1765, with a longer bout in 1788. The royal doctors couldn’t figure out what was wrong with him, so the King was sent to Cheltenham Spa to recover, almost 100 miles away, for the restorative waters: this did not, however, alter his condition. In fact, in November of that year, he worsened, talking to himself for hours on end; George would foam at the mouth, with his voice eventually going hoarse. 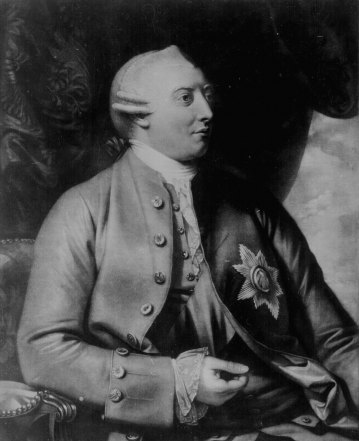 Without a diagnosis or treatment to reassure his subjects, rumours began to spread about the King’s state of mind. One particular rumour that has endured was that George shook hands with a tree, thinking it was the King of Prussia!

In the late 18th century, the understanding of mental illness, and remedies and treatments for psychological conditions for were primitive by today’s standards. Doctors would forcibly restrain George until he was calm, or apply caustic poultices (think, homemade, primitive creams) to him to draw out ‘evil humours’.

In 2014, previously unseen maps were discovered at the British Library. These showed designs for palaces in Hanover, as George considered abdicating after his recovery in 1789. Others were for extensions and renovations at Kew: a diagram of a building was drawn in ink over a pencil outline ‘in a rather savage way’ on the back of an order of service. Some rooms have no doors, there is no way to go from one room to the next, and a courtyard has four grand staircases in it.

Martin Clayton, head of prints and drawings at the Royal Collection Trust, described George’s drawings as ‘enthusiastic…slightly obsessive in places’, while Peter Barber, head of map collections at the British Library, called them ‘at the very least odd and actually rather disturbing’.

This later bout of illness began to see the King’s ability to rule questioned. As a conscientious ruler committed to his work, George read all government papers and sometimes annoyed his ministers by taking such a prominent interest in government business. Naturally, his work was unattended as he suffered from a bout of illness, and his government began to make plans.

Prime Minister William Pitt and opposing senior-Whig politician Charles James Fox debated a regency during the King’s illness of 1788, when George could not deliver the opening speech in Parliament for the new session. They both agreed that The Prince of Wales was the most convenient regent, but Fox suggested that it was The Prince of Wales’ absolute right to act on his ill father’s behalf with full powers. Pitt, however, argued it was for Parliament to decide, fearing The Prince of Wales would see him ousted from office, since the future George IV was a close ally of Fox’s.

In February 1789, the Regency Bill was introduced and passed in the House of Commons, but George recovered before the House of Lords could make it law.

George IV became regent for his father, when he was suffering with ill mental health. Wikimedia Commons. Portrait by Sir Thomas Lawrence

George III became popular following his understanding treatment of two insane assailants, Margaret Nicholson in 1786 and John Frith in 1790. Nicholson lunged at George’s chest with a dessert knife, while Frith threw a stone at the King’s carriage. George feared that Nicholson would be treated badly for her attack and apparently said: “The poor creature is mad; do not hurt her, she has not hurt me.” It seems his experiences, whether he remembered them, or was even aware of them, might have made him more inclined to spare those who appeared mentally ill.

In a change to policy, Pitt proposed to remove penal laws against Catholics but the King refused, claiming it would violate the oath he made at his coronation, to maintain Protestantism. At about the same time, he was struck with another bout of illness, which George blamed on worry over the policy.

1804 saw the return of the unidentified illness, and by 1810 the King was blind with cataracts, also suffering with rheumatism. This came following the death of his youngest daughter, Princess Amelia. The King agreed to the Regency Act, and though he recovered somewhat the following year, he became permanently incapacitated.

During the Regency, the Prince of Wales left much governance to his father’s ministers, not interested in Monarchical business. An anti-French alliance was created in 1814, which included Russia, Prussia, Austria, Britain and several smaller countries; it was this coalition that defeated Napoleon. The same year saw the Prince Regent sign a treaty to end the war with the United States, and The Duke of Wellington defeated Napoleon at the Battle of Waterloo in 1815.

This period of George’s illness saw the creation of a particular style of architecture, known as Regency style. John Nash was its creator and the Brighton Pavilion was constructed under his son’s supervision – arguably the King’s illness paved way for one of the most recognisable architectural forms in British history.

George, the Prince of Wales, was extravagant in his lifestyle (as can be seen by the Pavilion), quite a contrast to his father’s frugal way of life. This earned his son an unpopular reputation with the British population, though the King couldn’t intervene or chastise his son due to his incapacitation.

George III lived at Windsor Castle until his death in 1820, having reigned for 59 years and 96 days. Only Queen Victoria and Elizabeth II have surpassed this record.