On this day in 1953, Elizabeth II was crowned at Westminster Abbey.

Having become Queen on 6th February 1952, when King George VI died at Sandringham, it took almost 18 months for the coronation ceremony to take place; this was to give ample time for the planning and preparation of such a large-scale, and important, event. The Coronation Commission, the body planning the coronation, was chaired by The Duke of Edinburgh.

The observance is rich in religious significance, historic associations and pageantry, and is over 900 years old. Queen Elizabeth II’s coronation was the first to be televised.

Prior to the actual event, The Queen began wearing the Imperial State Crown, to become accustomed to its weight as she went about her daily errands. She practised with her Maids of Honour using a sheet for the Robe of State.

On 2nd June 1953, members of the Royal Family, including Queen Elizabeth, The Queen Mother and Princess Margaret, began to wait in Westminster Abbey a while before the ceremony began. They were joined by peers of the Realm, members of the House of Commons, Prime Ministers from the UK and Commonwealth, as well as representatives of foreign states.

Westminster Abbey, as the Royal church for the Palace of Westminster, has been the place of coronation for Monarchs for nine centuries. Before the Abbey was built in 1245, coronations were carried out at the most convenient location, including Bath, Oxford and Canterbury.

In typical British style, the rain poured for Elizabeth’s coronation, but it did not stop thousands of people from lining the streets to see their Queen crowned.

Prior to The Queen’s arrival at the Abbey was that of St. Edward’s Crown; the crown was carried into the Abbey to await the arrival of Her Majesty, and is made of solid gold, bearing 444 precious stones, and weighs over 4lb!

Elizabeth II left Buckingham Palace in the Gold State Coach, wearing the Diamond Diadem and the velvet Robe of State, which required seven Maids of Honour to carry it.

Dr Geoffrey Fisher, Archbishop of Canterbury, conducted the ceremony, which began at 11am. The Queen struggled to move somewhat , the Robe and carpet in the Abbey causing friction, but slowly made her way up the central aisle to ‘I was glad’, by Sir Hubert Parry.

Her Majesty then prayed at the Chair of Estate, near the altar, and then sat upon it. Peers gathered here, holding the various pieces of coronation regalia, which were handed it over to the Archbishop of Canterbury, who then passed them to the Dean of Westminster, to take their place on the altar. 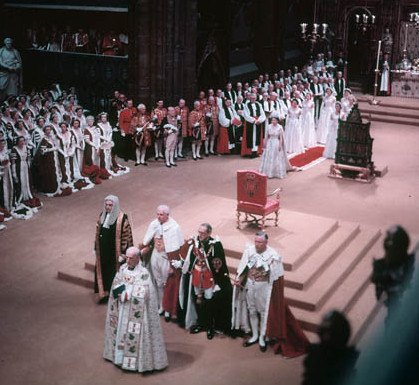 The Queen then moved to King Edward’s Chair (also known as the Coronation Chair). Before seating herself, she turned, and the Archbishop of Canterbury and the Lord High Chancellor, the Lord Great Chamberlain, the Lord High Constable of England, and Earl Marshal of the United Kingdom asked the audience separately:

‘Sirs, I here present unto you Queen Elizabeth, your undoubted Queen: wherefore all you who are come this day to do your homage and service, are you willing to do the same?’

The crowd replied ‘God save Queen Elizabeth,’ each time, in which The Queen would give a curtsey in response.

Sitting upon the Chair of Estate, it was time for Elizabeth II to take the Coronation Oath. The oath was as follows:

Archbishop: Madam, is your Majesty willing to take the Oath?

Queen: I am willing.

Archbishop: Will you solemnly promise and swear to govern the Peoples of the United Kingdom of Great Britain and Northern Ireland, Canada, Australia, New Zealand, the Union of South Africa, Pakistan, and Ceylon, and of your Possessions and the other Territories to any of them belonging or pertaining, according to their respective laws and customs?

Queen. I solemnly promise so to do.

Archbishop. Will you to your power cause Law and Justice, in Mercy, to be executed in all your judgements?

Archbishop. Will you to the utmost of your power maintain the Laws of God and the true profession of the Gospel? Will you to the utmost of your power maintain in the United Kingdom the Protestant Reformed Religion established by law? Will you maintain and preserve inviolably the settlement of the Church of England, and the doctrine, worship, discipline, and government thereof, as by law established in England? And will you preserve unto the Bishops and Clergy of England, and to the Churches there committed to their charge, all such rights and privileges, as by law do or shall appertain to them or any of them?

Queen. All this I promise to do.

Rising from the Chair, begin guided by the Sword of State, Elizabeth II swears on a bible on her knees

The things which I have here before promised, I will perform and keep. So help me God.

The Queen kisses the Book and signs the oath.

Next followed communion, where the Archbishop said: ‘O God… Grant unto this thy servant Elizabeth, our Queen, the spirit of wisdom and government, that being devoted unto thee with her whole heart, she may so wisely govern, that in her time thy Church may be in safety, and Christian devotion may continue in peace’. He gave numerous readings from the Bible.

‘Zadok the Priest’ was sang as Her Majesty was anointed; her jewellery and robe was removed by the Earl of Ancaster and the Mistress of the Robes (The Duchess of Devonshire). The Queen, wearing only a simple, white linen dress over her coronation gown, sat on the Coronation Chair. The Archbishop of Canterbury assisted by the Dean of Westminster made a cross on The Queen’s forehead with holy oil; the oil was made from the same base used at George VI’s coronation in 1937.

The entire ceremony was televised, though this act was concealed from the view of the cameras by a canopy held by four Knights of the Garter. The Duchess of Devonshire and Dean then placed the second robe, the golden Supertunica, on Her Majesty.

Spurs and the Sword of State were presented to The Queen and then placed back on the altar. Armills (bracelets) came next, followed by the Stole Royal (silk scarf), Robe Royal, and the Sovereign’s Orb. Next, Her Majesty received The Queen’s Ring, the Sceptre with the Cross (bearing the huge Cullinan I diamond, and denoting temporal authority), and the Sceptre with the Dove (representing spiritual authority).

Queen Elizabeth II was crowned by the Archbishop of Canterbury, with the crowd shouting ‘GOD SAVE THE QUEEN!’ three times, at the exact moment St. Edward’s Crown touched her head. The princes and peers gathered, then put on their coronets; a 21-gun salute was fired from The Tower of London. 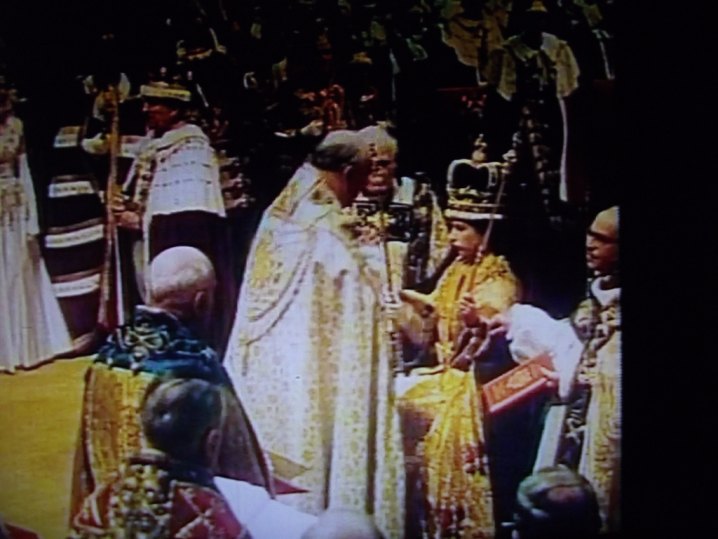 Moving to the throne, peers, beginning with The Duke of Edinburgh, began to pledge their allegiance to the newly crowned Queen. After all peers had done so, ‘God save Queen Elizabeth. Long live Queen Elizabeth. May the Queen live for ever! ‘ was shouted by those gathered.

Swapping to the Imperial State Crown and holding the Sceptre with the Cross and the Orb, Queen Elizabeth II left Westminster Abbey, to shouts of ‘God save The Queen!’. In the Gold State Coach, with an escort of thousands of military personnel from around the Commonwealth, The Queen travelled back to Buckingham Palace on a lengthened route of 8km. Once at the Palace, she appeared on the balcony and witnessed a flypast.

Later in the evening, The Queen turned on the illuminations in the Mall, and fireworks were set off on the Victoria Embankment.

The Queen wore a custom gown made by Normal Hartnell to her coronation, which was embroidered with roses, thistles, leeks, shamrocks, ferns, and other floral symbols from across the Commonwealth. It is reported that Hartnell put a four-leaf clover on the gown, just where Her Majesty’s right hand would touch, unbeknownst to The Queen.

Her Majesty hosted a coronation luncheon, where the recipe for ‘coronation chicken’ was first used. The Duke and Duchess of Windsor (Edward VIII and Wallis Simpson) attended a street party in New York, celebrating their niece’s coronation. Alike the coronation of her father, George VI, acorns from oaks in Windsor Great Park, were sent across the Commonwealth to be planted in parks, school grounds, cemeteries, and private gardens; these are known as Royal or Coronation Oaks. Trees were planted near Monmouth, Wales, spelling out ER to commemorate the occasion.

Next articlePhilip refused to kneel before Queen at coronation & was unhappy leaving the Navy?Next