It has been revealed that The Queen Mother learned to shoot rats at Buckingham Palace in order to protect herself, should she or her family be kidnapped by the Nazis during World War II. Royal history. 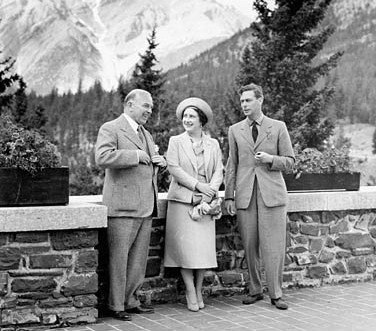 The Queen Mother’s former lady-in-waiting, Margaret Rhodes, has revealed the information in a new documentary for the BBC. The programme, part of the BBC’s new Greatest Generation series takes a look a those in their 90s and 100s who lived through the tumultuous times of WWII.

Queen Elizabeth, as she was at the time, feared a German parachutist landing at Buckingham Palace, and so learned to shoot a pistol in the Palace’s gardens for protection. She practised on rats that had been flushed out of the Palace.

‘I suppose quite rightly, she thought if parachutists came down and whisked them away somewhwere, she could at least take a parachutist or two with her.’ the 89-year-old said.

Buckingham Palace was bombed nine times between 1939 and 1945, with one death in 1941. The Telegraph reports on what Ms Rhodes had to say about her time at Windsor Castle with Princess Elizabeth and Princess Margaret during the war.

“I did live quite a long time at Windsor and it was lovely. The King and Queen were being marvellous and really working like slaves. Every day they’d go off to tour different parts of the country which had been bombed and they came back to spend the weekend with the girls, who were permanently at Windsor.”

George VI was given different colour-coded letters to inform the family how close the bombers were.

“I do remember one night we three girls were woken up and taken to The King and Queen’s rooms, where I remember The King opening a bedside cabinet and taking out a revolver.”

“And when we all processed very slowly, because Queen Elizabeth refused to be hurried, we were down in subterranean corridors for what seemed like miles and eventually got to the shelter which was somewhere in the subterranean regions of Windsor Castle. I can’t remember what it was like, but it was quite comfortable.”

Margaret’s memories have been published along with recollections of over 30 others who lived through the war in a new book; ‘Britain’s Greatest Generation’ is out now, penned by Sue Elliot and Steve Humphries.

On Wednesday, The Prince of Wales met President Kenyatta of Kenya at Sandringham 🇰🇪🇬🇧.⁠
#OTD in 1689, William, Duke of Gloucester, was born at Hampton Court Palace. ⁠
@thecrownnetflix has revealed a first look at Imelda Staunton as Queen Elizabeth II in season 5 of Netflix’s hit period drama.⁠
The Princess Royal visited the @nwrfca based at the Altcar Training Camp in Hightown to officially open the new headquarters and seal a time capsule.⁠
Happy 10th wedding anniversary to Zara and Mike Tindall! 💍⁠
A slice of Charles and Diana's wedding cake is up for auction, along with an order of service, ceremonial details and a royal wedding breakfast programme!⁠⁠