Today marks 23 years since the Diana, Princess of Wales died. I reflect on one of those rare ‘I know exactly where I was’ moments… The 31st August 1997 is a day that is emblazoned onto my memory, and the week following still tinged with surreality.

I only went back to my holiday apartment to finish some last minute packing and switched the TV on when a newsflash appeared: “Diana, La Princesa de Gales ha muerto en un accidente de trafico” (Diana, The Princess of Wales has died in a car crash).

I watched incredulous, thinking ‘they must have got this wrong!’.

The short newsflash consisted of mentioning her wedding to the heir to the British throne, Prince Charles, and saying she had attended West Heath School. A truly bizarre note to end a piece of news of that magnitude lending it an even more surreal air. And then, normal programming resumed. Just like that.

In the days before smartphones, social media and news alerts, it was difficult to take in the enormity of what had happened on 31st August 1997. I felt sick as I thought of the boys losing the mother, who had so obviously adored them.

I went back outside and blurted out to my now-husband: “Diana and Dodi are dead. There’s been a fatal car crash.” 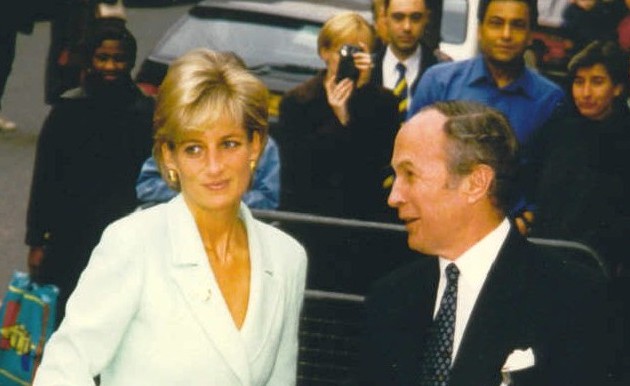 Diana died in a car crash in Paris in 1997. (Pulseman/Flickr)

“It can’t be true. They’ve probably staged it to get away from the press for a few days” he said.

It was difficult to get more information until we got to Malaga airport later that day, as we were due to fly home and the British newspaper headlines blurted out what we hoped had just been a horrible mistake.

My parents came to pick us up from Heathrow, and on the way back home, we spotted the cortege with Dodi’s body near Regent’s Park Mosque, evidenced by the obligatory flashbulbs.

The obituaries running pretty much on a loop across all the mainstream TV channels confirmed the reality of what had happened, and the footage of the boys on the way to church with the rest of the Royal Family as if nothing had happened seemed voyeuristic and bizarre…

I went back to work the next day, a stone’s throw away from Kensington Palace, and my enduring memory of that week is of seeing floods of people exiting the tube, sombre, or crying, whilst they swarmed to lay floral tributes at the gates of Diana’s home. I went almost every day that week in the knowledge that – despite being a born and bred Londoner – I would never witness anything on this scale again. The atmosphere was expectedly solemn and eerily quiet, with just the sound of people sobbing.

Diana may have lost her HRH style, but the unprecedented public outpouring of grief reflected her popularity above all the Royals, that no title could detract from; or, as Charles Spencer, put it in his eulogy for his sister ‘she needed no royal title to continue to generate her particular brand of magic’. This was as true in death as it had been in life.

Despite a longstanding interest in the Royal Family (sparked only by the arrival of a fresh faced and fascinating Lady Diana; up until then they had seemed a pretty staid bunch), I had never sought out to attend a public event like a Trooping of the Colour or a Royal Wedding. But this was different. It was happening on my doorstep and even if it weren’t, I would have gone to the palace.

In the middle of the week, I had to fly to Lisbon for a two-day business trip and even from the sky, the sea of floral tributes at both Buckingham and Kensington Palace seemed to envelop their gates, as we prepared to land back in London.

On the Friday night after work (5th September), I passed Barker’s (now the Whole Foods store) on Kensington High street on the way to the palace for one last visit, and to take in the atmosphere, which seemed strangely comforting against the backdrop of the continually screaming headlines and news bulletins. Two enormous black and white photographs of Diana hung in the shop front from a stunning Patrick Demarchelier photo shoot. Tears pricked my eyes at the sudden realisation that the woman who had been in the public domain on a daily basis from the moment she had entered public life had gone forever and would never be seen again.

There was now an enormous crowd of people in the street and no chance of getting anywhere near the palace. A sudden and rapid stream of flashbulbs lit up the area as a police-escorted vehicle carrying Charles and his boys entered the palace, where they went to pay their last respects in private.

The next morning, I went to line the route at the public entrance to Kensington Palace, and waited amongst the still, mainly silent and occasionally-sobbing, throng.

My abiding memory of that day (apart from Charles Spencer’s stunning speech) was hearing the horses’ hooves clip-clopping amongst the silent crowd, and then seeing the ‘Mummy’ card that broke the heart of everyone who saw it.

The world lost an icon, a fashionista, a philanthropist. The press had lost its fodder on a quiet (and not so quiet) news day and the country had lost its English rose; the original girl next door and favourite Royal all rolled into one, but here were two boys who had – quite simply and tragically – lost their doting mother.

The Monarchy in New Zealand

Royal Rewind: The Earl and Countess of Wessex’s...

Royal Rewind: Diana, Princess of Wales and ‘Her...