Read our latest posts
‘A world without books is unimaginable’ Duchess of Cornwall says on World Book Day
Books give me ‘reassurance’, says Princess Beatrice in blog for World Book Day
Duchess of Cornwall visits Croydon vaccination centre & says Prince Philip is ‘improving’
Countess of Wessex announces winner of Queen’s Award for Design & talks her own style
‘It might be quite alarming’ – Queen jokes statue of herself in Adelaide will scare locals
Prince Philip transferred to St Bart’s for cardiac tests & further treatment
Prince of Wales shares ‘profound’ appreciation for Royal Mail workers
Prince William and Kate show support for vaccines in call with vulnerable Brits
St John’s vaccination group gains new volunteer: The Countess of Wessex
Queen encourages people to have Covid-19 vaccines – it ‘didn’t hurt at all’ she says
Home Jewels and Jewellery The Queen’s Jewellery: Grima ruby brooch
Jewels and JewelleryRoyal Fashion

This unusual looking brooch is made from ‘freeform’ gold (it looks like an abstract sun to me) and recycled carved rubies, with small diamonds studding it. The rubies are reportedly from an old Indian headdress.

The Duke of Edinburgh had this made for The Queen in 1966. Andrew Grima, the brooch’s designer, came to the attention of Lord Snowdon (Princess Margaret’s husband) after he complained of a boring jewellery industry. 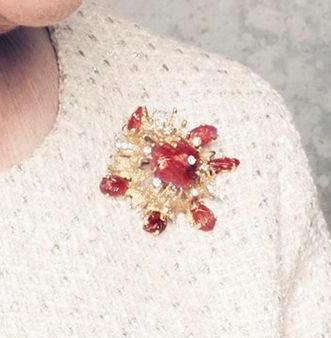 Grima won The Duke of Edinburgh’s Prize for Elegant Design, The Queen’s Award for Industry, and a Royal Warrant after the gift was given.

It certainly holds a special place in The Queen’s collection: she wore it for official photos to mark 70 years of marriage to Prince Philip in 2019. This brooch is usually seen on pink and red outfits.