The Duchess of Cambridge joined her husband, The Duke of Cambridge, to visit parts of Scotland after Prince William carried out solo engagements over the weekend.

The Earl and Countess of Strathearn (as the couple are known in Scotland) first paid a visit to Turning Point Scotland, which is country’s leading social care provider, and helps people with challenges including homelessness, mental health, and substance abuse.

The Duke and Duchess of Cambridge heard how the organisation is providing support to those who need it the most in Scotland. (@KensingtonRoyal)

The couple heard about the support network the organisation provides to those facing homelessness, mental health issues and substance abuse.

Prince William and Catherine spoke with individuals supported by Turning Point Scotland’s Turnaround service. The service delivers targeted programmes to address the complex and interrelated issues of offending behaviours and problematic use of alcohol and other drugs, which often result in patterns of re-offending.

By delivering these services, the organisation is working to combat these cycles and address the fundamental issues in order to ensure that those they support are able to live mentally healthy and happy lives.

During the royal visit, Prince William and Catherine also joined a video call with staff and service users from Turning Point Scotland’s Glasgow Overdose Response Team, to listen to how the service works to reduce drug related deaths by providing real-time crisis support for people who have experienced a near fatal overdose.

Neil Richardson, CEO of Turning Point Scotland, said that the couple were clearly ‘very well-tuned into’ how the organisation supports people with mental health challenges and some of the barriers that they face.

“I think they recognised a lot of what they heard today,” he said.

‘They came over as very relaxed, very personable. Everyone commented on it afterwards, they were just lovely people. I think this will give the whole organisation a real lift, partly that they have taken the time and the interest to come and spend some time with us, but also it’s an endorsement that what we are doing matters and that it is valued.”

He continued: “And in social care that’s not always the case, staff often get treated pretty poorly. So it really counts for an awful lot.”

The Earl and Countess of Strathearn heard how the organisations have been working closely together in the hopes of helping to keep young people engaged in education or training. By keeping them in education to obtain the skills and qualifications is crucial to preventing young people in becoming vulnerable to violence.

The Royals met young people supported by the service to hear about their experiences, and how coming to the centre has inspired them to pursue qualifications in subject areas such as music production and bike maintenance.

During the visit, the Duchess experimented in creating a song alongside Heavy Sound, which aims to re-engage young people who fall out of education by delivering projects tailored to their interests, including song writing, DJing, music production, and sound recording.

Persuaded by Manager Thilo Pfander, Catherine received some encouragement from her husband who said: “Yeah, drop a beat in the background.”

Catherine produced a heavy bass track with an added piercing synth sound over the top.

William laughed and said: “What’s that? It sounded like a cat. It might catch on – in about a hundred years’ time!”

After a few moments the Duke pleaded for it to stop saying: “It’s hurting my ears! … I’m not sure it’s number one material yet.”

Keep up the incredible work @vruscotland in leading the way in finding compassionate, holistic, human-led solutions.

Oh and please do delete that music… pic.twitter.com/wnuOgvDpTI

In the evening, the royal couple welcomed volunteers from Sikh Sanjog to the Palace of Holyroodhouse to join them in making chappatis and to package up curries in the Palace’s café kitchen. The meals would then be distributed to vulnerable families in Edinburgh. 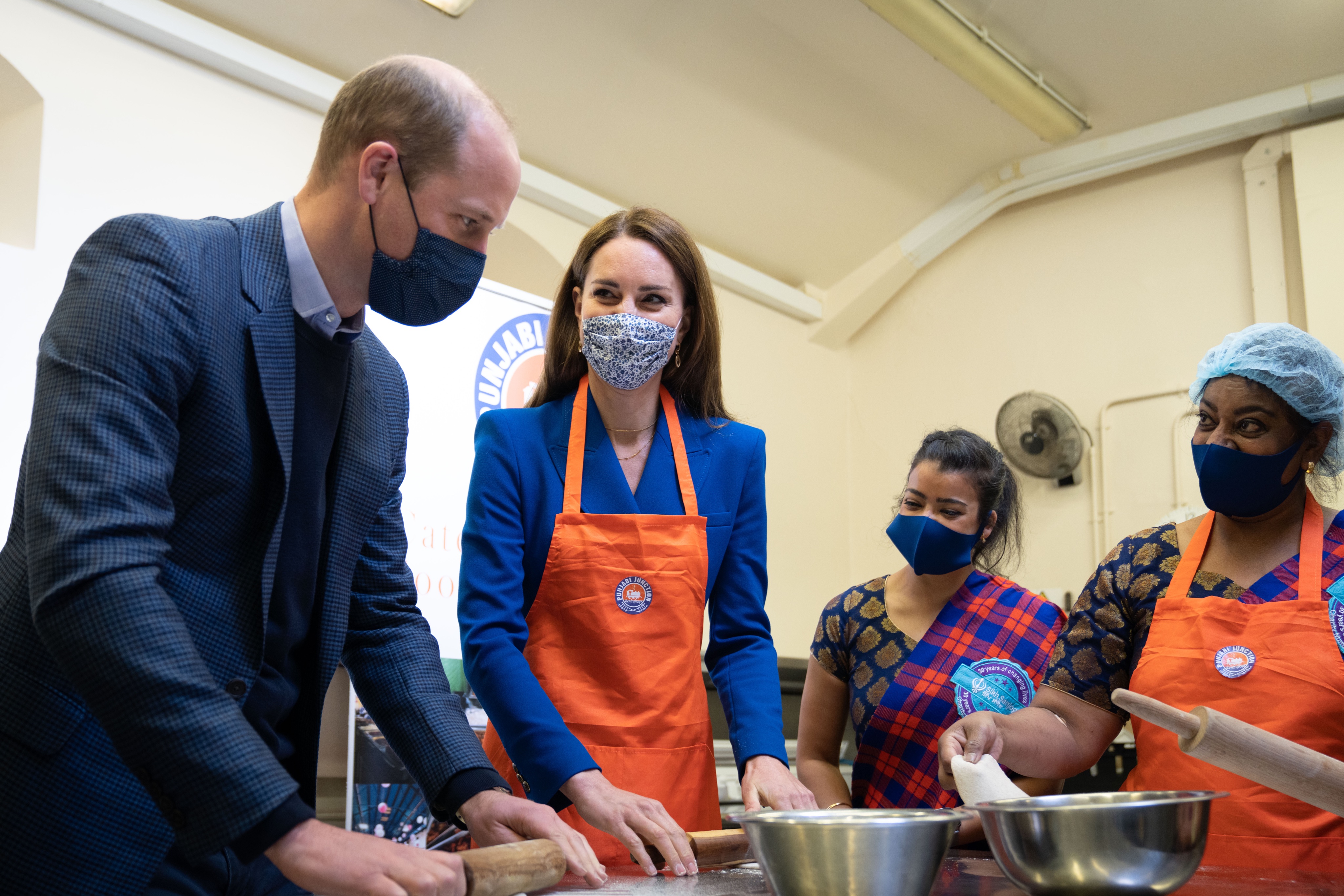 William and Catherine make chappatis and packed up curries to be distributed to the residents of Edinburgh. (IMAGE: Kensington Royal).

Sikh Sanjog, Scotland’s only Sikh Family Support Charity, was established in 1989 to support women from the Sikh community integrate into wider Scottish society.

The Duke and Duchess of Cambridge heard how the organisation aims to inspire and empower women to advance their own life opportunities through building skills and confidence. The organisation provides social and wellbeing support for women of all ages and works with young people from diverse ethnic communities, delivering counselling services and facilitating youth groups to those who need it most. 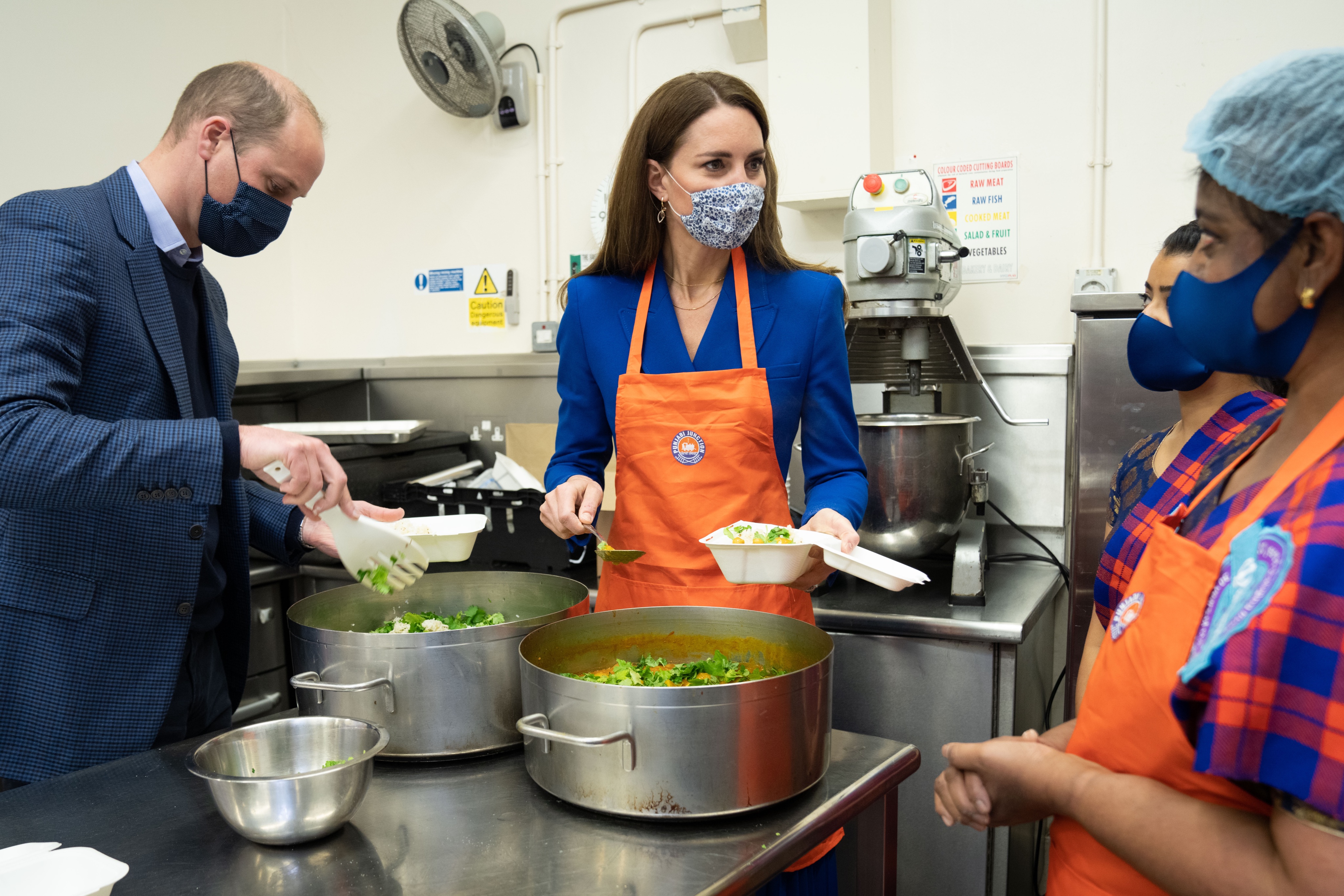 Prince William revealed his wife is very good at making curries although he can’t handle the spice. (IMAGE: Kensington Royal).

When Catherine was asked if she made curry at home, she replied: “Yes, I love it.”

William acknowledged her Indian dishes were very good, but had one reservation. “She likes a bit of spice,” he laughed. “I’m not too good with spice.” 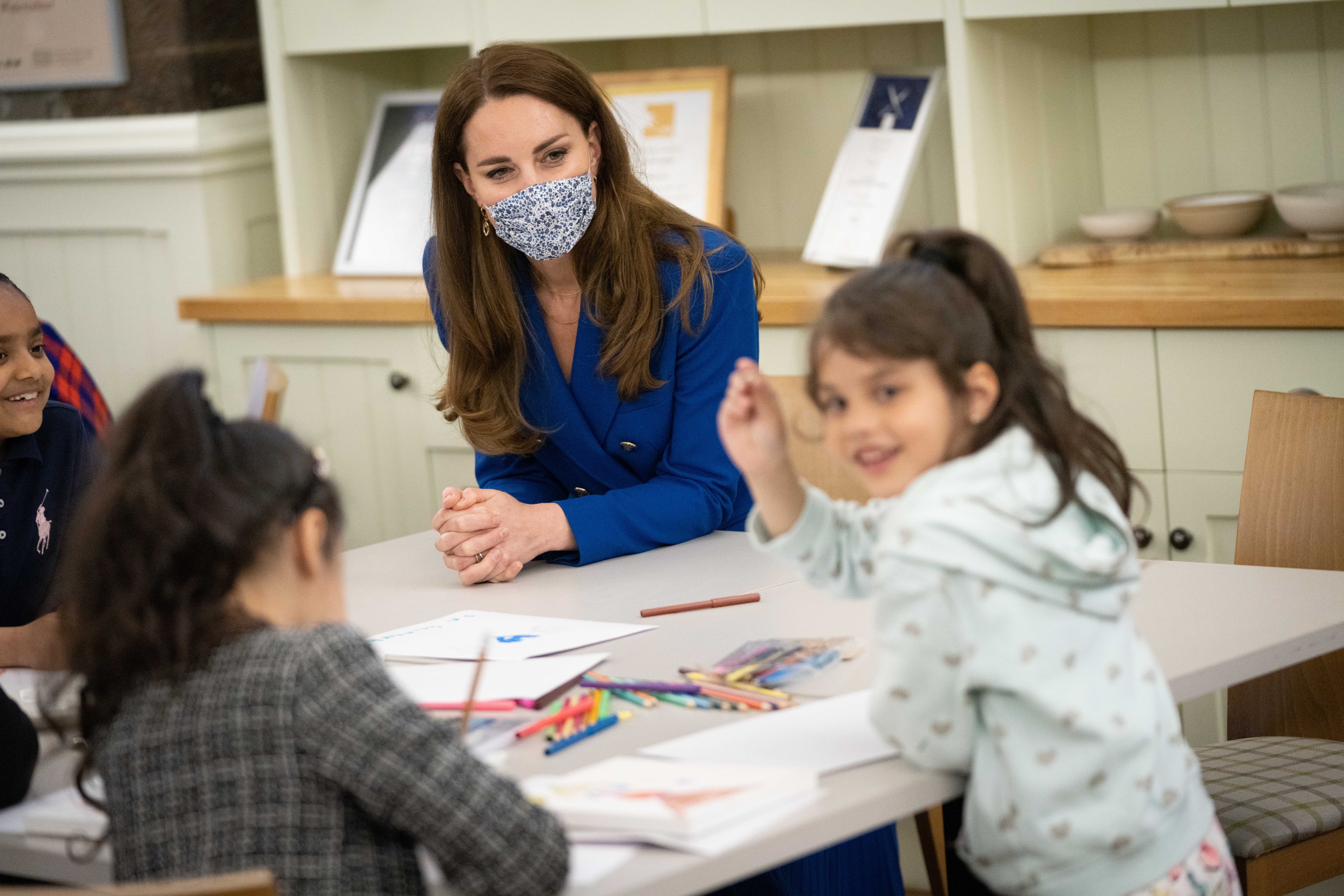 Catherine spoke to children who are part of the Sikh Family Support Charity. (IMAGE: Kensington Royal).

The Duke and Duchess of Cambridge are set to be in Scotland til Thursday, with Kensington Palace confirming they were looking forward to meeting ‘a wide variety of people from across the country as well as charities and organisations who are doing incredible work on issues such as the environment, mental health, homelessness and addiction.’