‘This is too important to ignore’: Camilla tackles taboo of domestic abuse & hears harrowing stories

Camilla, Duchess of Cornwall yesterday met with survivors of domestic abuse to help try to tackle the taboo subject in society. The Duchess visited the SafeLives charity, which supports women and their families affected by an abusive partner.

Camilla attended the event at Oval with the Minister for Preventing Abuse and Exploitation, MP Karen Bradley. Here she heard terrible stories of women suffering at the hands of their partner, but also from family and friends of women not fortunate enough to survive, who have since been helped by the charity.

Camilla visited SafeLives in London and spoke with survivors of domestic abuse and their families. Rebecca English/Daily Mail

SafeLives has helped 67,500 people at high risk of domestic abuse with its advisors; a further 76,000 children have also been assisted by the charity, which seeks to end domestic abuse in the UK. It is thought 1,000,000 women are currently in abusive relationships.

The Duchess sat in a circle with the women to hear their experiences of abuse. They each had an item which was part of their story.

Rachel Williams, 43, from Newport attempted to leave her husband who had abused her during their 18-year marriage. Angered, he confronted his wife at the salon in which she worked – with a gun. He fired shots, and one hit her in the leg as she curled into a ball to protect herself; the other missed her head by inches.

She attempted to wrestle the gun from him, and her watch – the item she brought along – was badly scratched, showing the force of the struggle.

Williams survived, but her 16-year-old son could not cope: he committed suicide. “He could not cope with what his father had done to me,” she said.

Another harrowing story came from Diana Parkes. Her daughter, Joanna Brown, was killed by her violent husband in 2010.

Pilot Robert Brown attacked his estranged wife with a claw hammer, their children just feet away. He then buried Jo in a grave he had dug weeks previously. Astonishingly, he was cleared of murder despite admitting to his crime.

Hearing these tales clearly moved Camilla, who bit her lip and showed teary eyes. Upon being told more about Joanna’s suffering, she went over to Diana and Joanna’s friend, Hetti, saying she would do anything within her power ‘to help’.

Hetti Barkworth-Nanton explained she had received plenty of worried and anxious phone calls from Joanna, explaining Robert also threatened his wife with a knife. 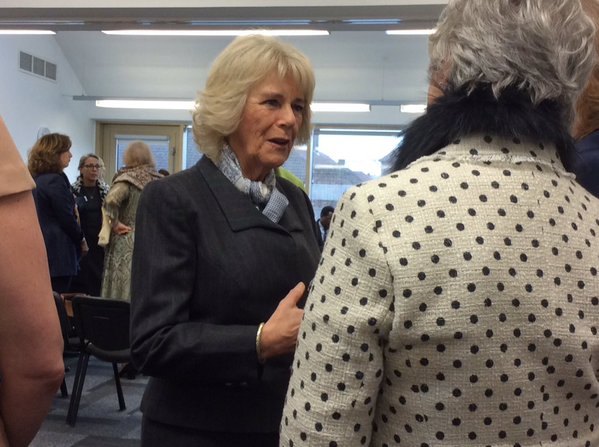 “It’s so important that people like yourselves speak up otherwise we gloss over it. And this is too important an issue to ignore,” Camilla said at the event.

“Another incredibly brave lady. Stories like this just have to be aired otherwise domestic abuse becomes a taboo subject.”

“I want to do anything I can to help raise this issue. All of you going around and talking about it does create awareness,” she added.

The Duchess of Cornwall has campaigned for rape and abuse victims for a number of years now, even penning an article for the Daily Mail in 2014, in which she called the statistics of such cases ‘truly horrifying’, and said she wanted to ‘shine a light on the violence hiding in the dark corners of our society’.

Camilla also came up with an idea to assist rape victims after their traumatic experience, often including an intimate medical examination. Working with the Rape Crisis Centre, and beauty columnist Elsa McAlonan, washbags were made up to help victims feel ‘more normal’ again; these were piloted in three Havens centres in London, specialist centres for people who have been sexually assaulted.

“It is a small something to make women and girls who go through such a terrible ordeal just a little bit more human again,” she said at the time. “It won’t change what has happened but might offer a small crumb of comfort.”

Here in America, I have, had witnessed women being abused ,and children. Even in the house I was staying at when I just came from Haiti to Brooklyn NY. My so call father used to abuses his wife. It was the most frightens moment in some body’s life. Sometimes I would said to her why don’t you fight him back? Why don’t you get his butt to jail? No she has said, I said well it will continue, than he would started to beated me up. I. Would felt this has to stop happened. Well me I had left the house,my step mother has stayed with him. It is very important for any body to feel safe around their partners, and family. However we do not give up on our victims, we have provided counseling, shelters for recovery, and some places even have a none disclose house for the victims. I think no one should have to stay with an abusive partners regardless of the cost.