Charles and Camilla remember Battle of Loos in Dundee

Prince Charles and Camilla spent the day in Dundee yesterday to remember the centenary of the Battle of Loos.

Loos was one of the biggest battles of the First World War, where 21,000 British soldiers died, about 7,000 of whom were Scottish. 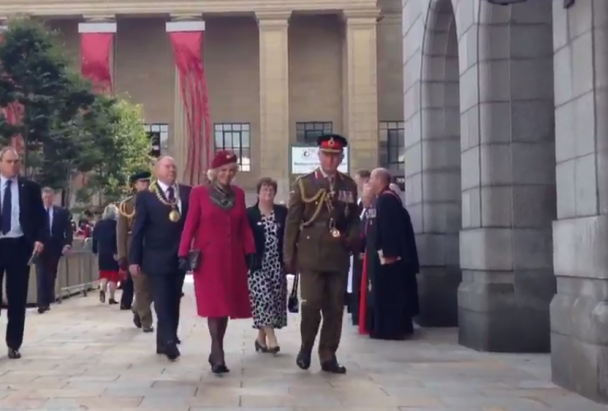 Charles and Camilla, Duke and Duchess of Rothesay, attended a service in Dundee to remember the Battle of Loos. Still from Radio Tay news Vine)

The Prince of Wales and Duchess of Cornwall joined Nicola Sturgeon, veterans and descendents of those who fought in Dundee at a service in the city to pay their respects for those lost at the bloody battle, which began 25th September 1915.

A parade of 250 current service personnel and 300 veterans preceded the service, which was part of a weekend-long centenary event.

Events to mark the centenary of the battle started on Friday, when a beacon at the top of Dundee war memorial was lit at dawn.

The Big Push, as the battle is also known, saw Captain Fergus Bowes-Lyon, The Queen Mother’s brother and Charles’ great-uncle, killed. It is estimated that 8,000 lives were lost within the first four hours of fighting the on first day.

Captain Bowes-Lyon died on the third day of fighting in the battle in north of France. 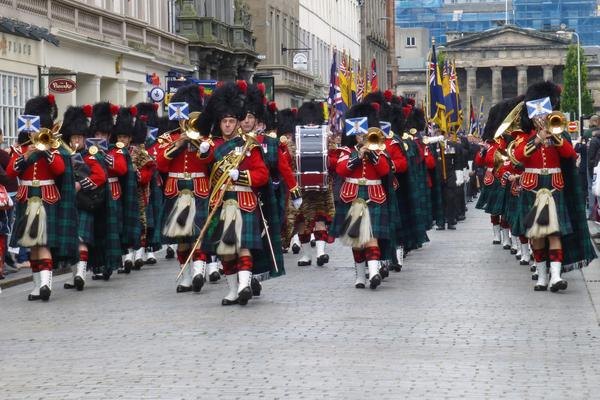 Current servicemen and women and veterans paraded before the service in Dundee. Caroline McClelland.

The City Square was then transformed into a “cathedral”, with four ministers from Dundee representing the Scottish Episcopal, Roman Catholic Church of Scotland, Church of Scotland and the Chaplain General to the Armed Forces.

Charles, wearing his Field-Marshall rank uniform and as Royal Colonel of the 3rd Battalion (The Black Watch), laid wreath against a specially-commissioned memorial stone. The First Minister and Lord Provost of Dundee also did the same.

The Duchess wore pink, trimmed Rothesay tartan; the couple are known as The Duke and Duchess of Rothesay in Scotland.

Unveiling a commemorative plaque at the reception, Prince Charles said: “The units involved at the Battle of Loos form a roll-call of Scotland’s finest regiments. They left the farms, factories and fishing villages of their native country and fought ferociously for our freedom in a foreign land.

“Their example is deeply humbling and is something in which the people of Scotland can take enormous and justifiable pride.”

The service ended with a lone piper.

Charles and Camilla later attended a reception for forces personnel and veterans, then went on to view an exhibition on the Battle of Loos by pupils from local schools.