The Earl and Countess of Wessex were in Scotland this week, and carried out various engagements on Monday and Tuesday, coinciding with The Queen’s visit for Royal Week.

The Earl and Countess of Forfar, as Prince Edward and Sophie are known in Scotland, visited a range of businesses to hear how they have managed during the pandemic. The Queen granted her youngest son, Prince Edward, the Earldom of Forfar two years ago, to mark his 55th birthday.

The first visit on Monday saw the couple visit Forfar Golf Club, to mark the 150th anniversary of the venue. 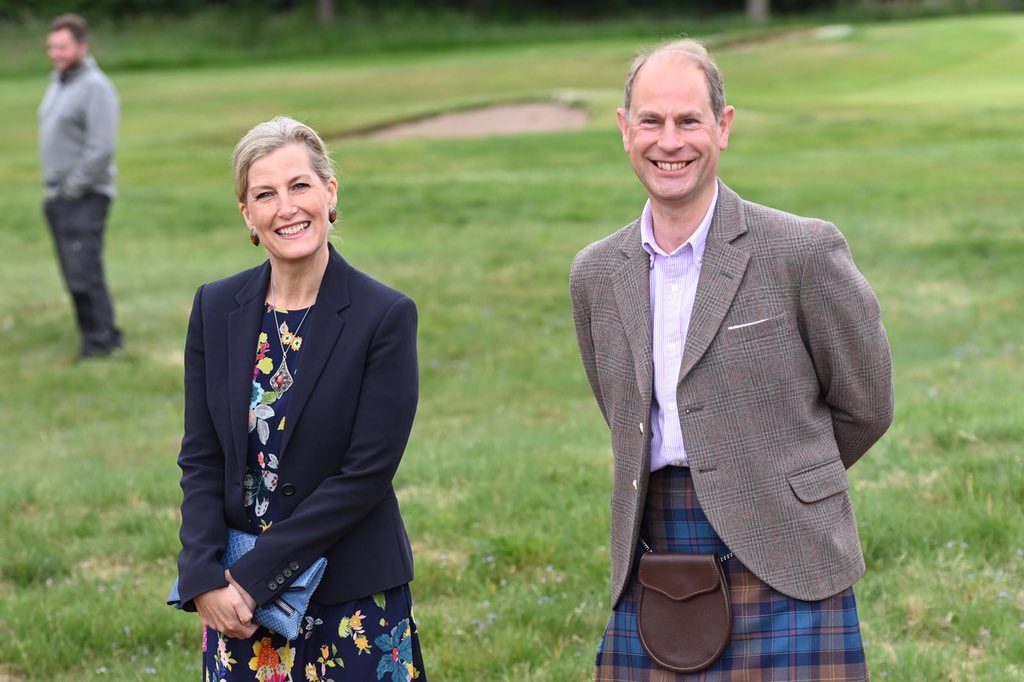 The Earl and Countess of Forfar carried out a number of engagements over a two-day period, starting off by visiting Forbar Golf Club. (Royal Family/Twitter)

During the visit the couple saw the tree they planted during a previous visit to the establishment in 2019, when they last visited Forfar.

The Countess even practised her swing on the golf course, with an almighty cheer from the crowd of spectators! Sophie was given high praise from the instructors who saw her take a shot.

Fore Far! The Countess of Forfar plays a shot in the new Peter McNiven Golf Academy on the first stop during their visit to the town. #Angus #LocalMatters pic.twitter.com/OPMYz15xde

The couple spoke to staff as they learnt more about the Golf Academy, which was named after a man who devoted his life to golf and bringing it to the community.

Coaching professional Karyn Dallas told the Earl and Countess about the thriving junior membership and the Royals were impressed by the talent of young golfers Aarran Moir, Sophie Wright, and Elle Mackie.

For the day’s engagements, the Earl wore a traditional Scottish kilt in the Forfar tartan that was registered in 2019 to coincide with his new title.

The Earl and Countess of Forfar are making a return visit to the town today. #Forfar Golf Club, celebrating its 150th anniversary, was their first port of call. #Angus #LocalMatters pic.twitter.com/kXI36ux8kY

The couple’s next stop was to Utopia Costumes. This visit was of particular interest to the Prince, given his days as a production assistant for Andrew Lloyd Webber’s Really Useful Theatre Company in the 1990s.

Once the couple arrived, they were shown around the facility by Ewan Campbell, Director of Utopia Costumes. 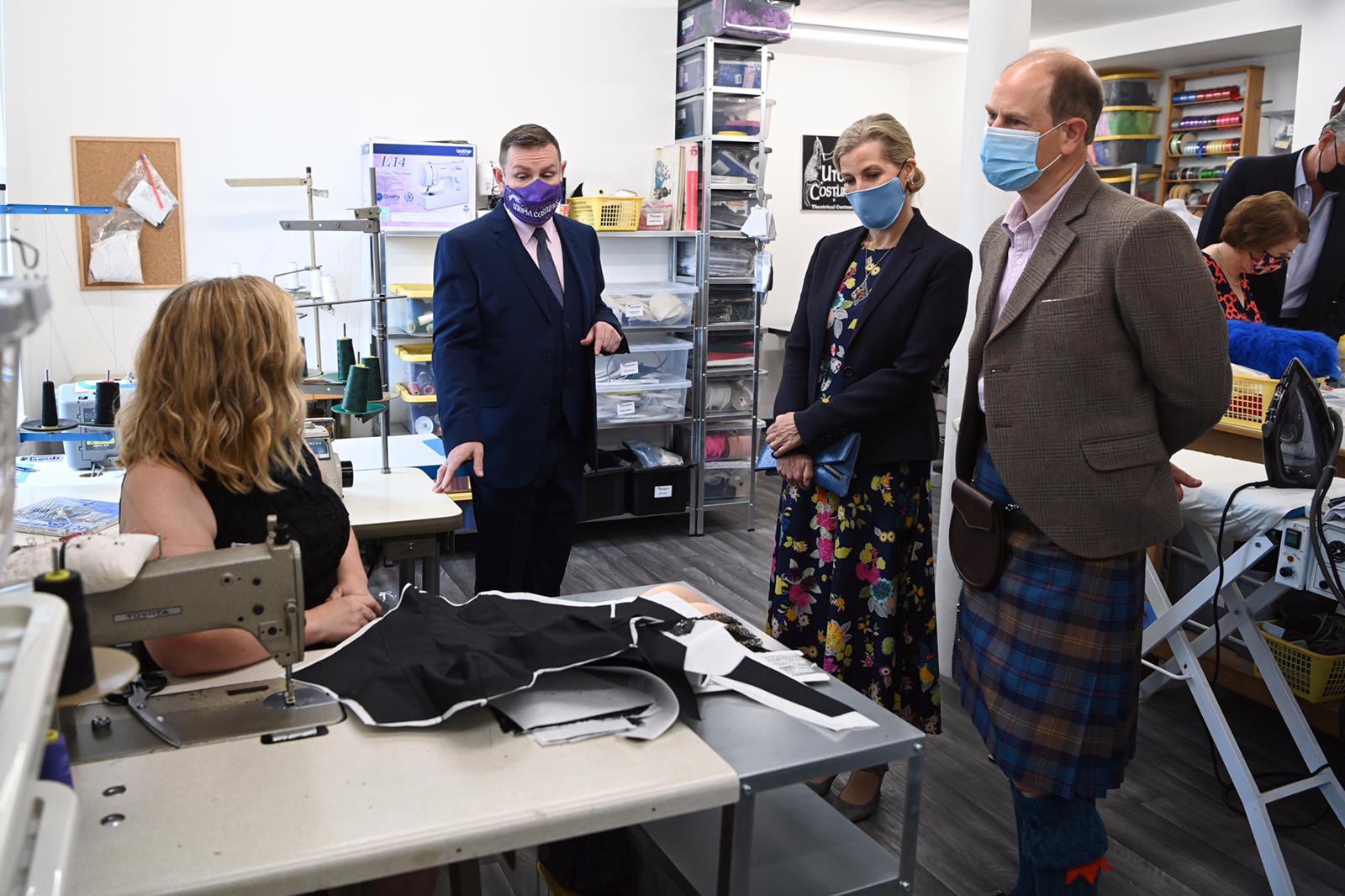 The couple paid a visit to Utopia Costumes, which was of particular interest to Prince Edward given his time as a production assistant. (Royal Family/Twitter)

The Earl and Countess of Wessex were introduced to costume makers and both asked questions about the construction of the costumes. They had both seen Kinky Boots when it opened on Broadway and were fascinated with the work that goes into drag costumes.

Sophie then turned her attention to the mermaids costume and tail, and the costume maker explained how Utopia adapt the original designs to make them practical for hiring to theatre companies all round the UK and Ireland.

Next came the wig room, where the wig dresser was preparing hairpieces for a photo shoot for the musical, Phantom of the Opera.

His Royal Highness commented about his experiences working on Phantom of the Opera when he worked in the West End, although jokingly admitted it was many years ago. 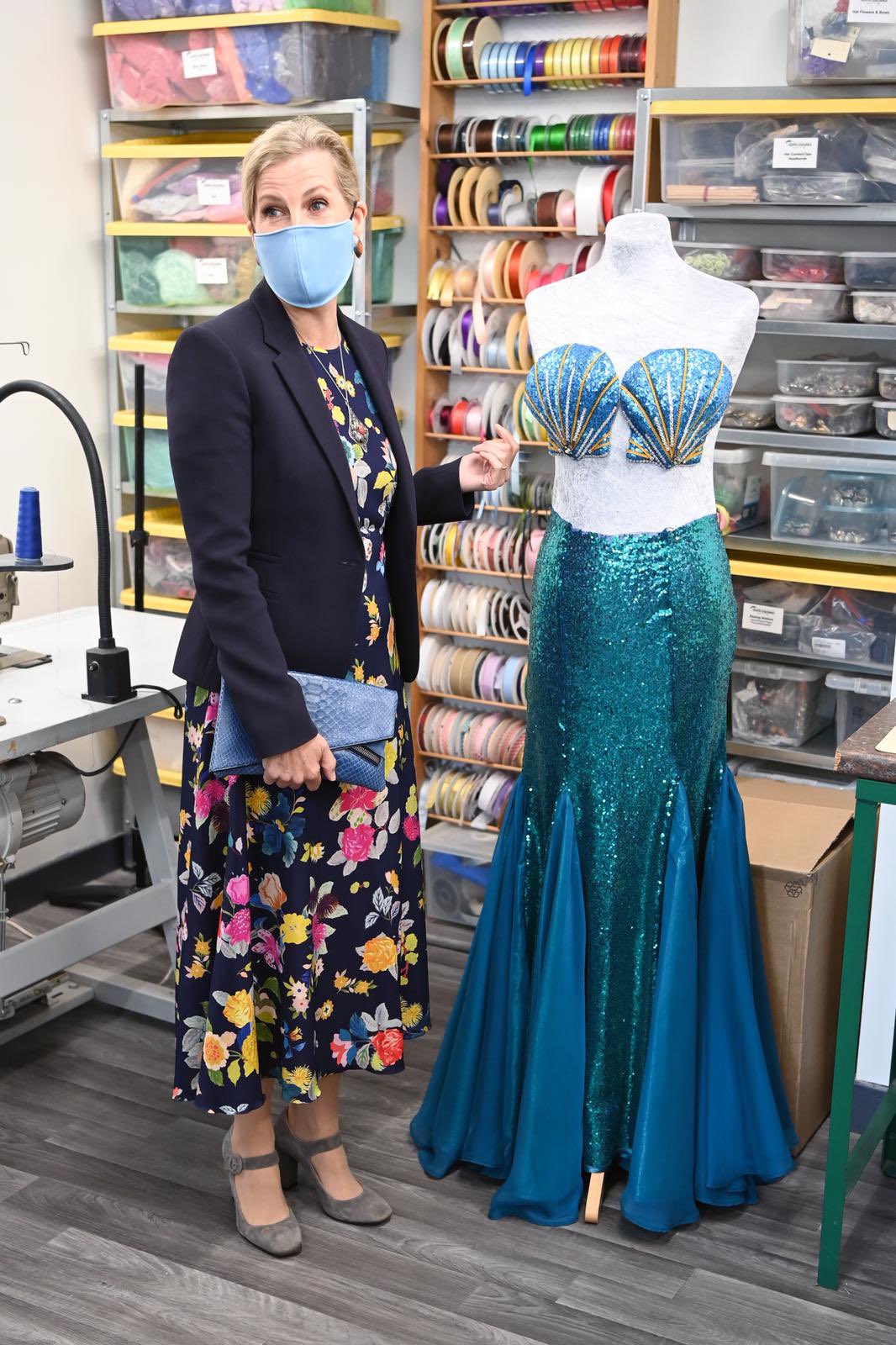 During the visit to Utopia Costumes, Sophie was fascinated with the mermaid costumes. (Royal Family/Twitter)

The Earl and Countess were directed to a display of boots that were for the wardrobe of Kinky Boots. The couple were asked if either of them would like to try on a pair but unfortunately both declined, with the Earl laughing saying they might not go with his kilt.

The Earl and Countess of Forfar even took the time to have a photograph with Lord Farquadd from the production of Shrek and were very amused with the costume as it sees the actor playing the part on his knees.

Before having their photograph taken with Lord Farquadd, Countess Sophie admired a model theatre on display in the studio and explained she had had one as child.

Speaking about the royal visit, Ewan said ‘It has been a great privilege to be chosen as business to represent Forfar and that we would be of such interest to the Earl and Countess. They are such lovely people who made us all feel at ease. Their visit has also been a great boost members of the Utopia team as the theatre industry starts to come back to life again.’ 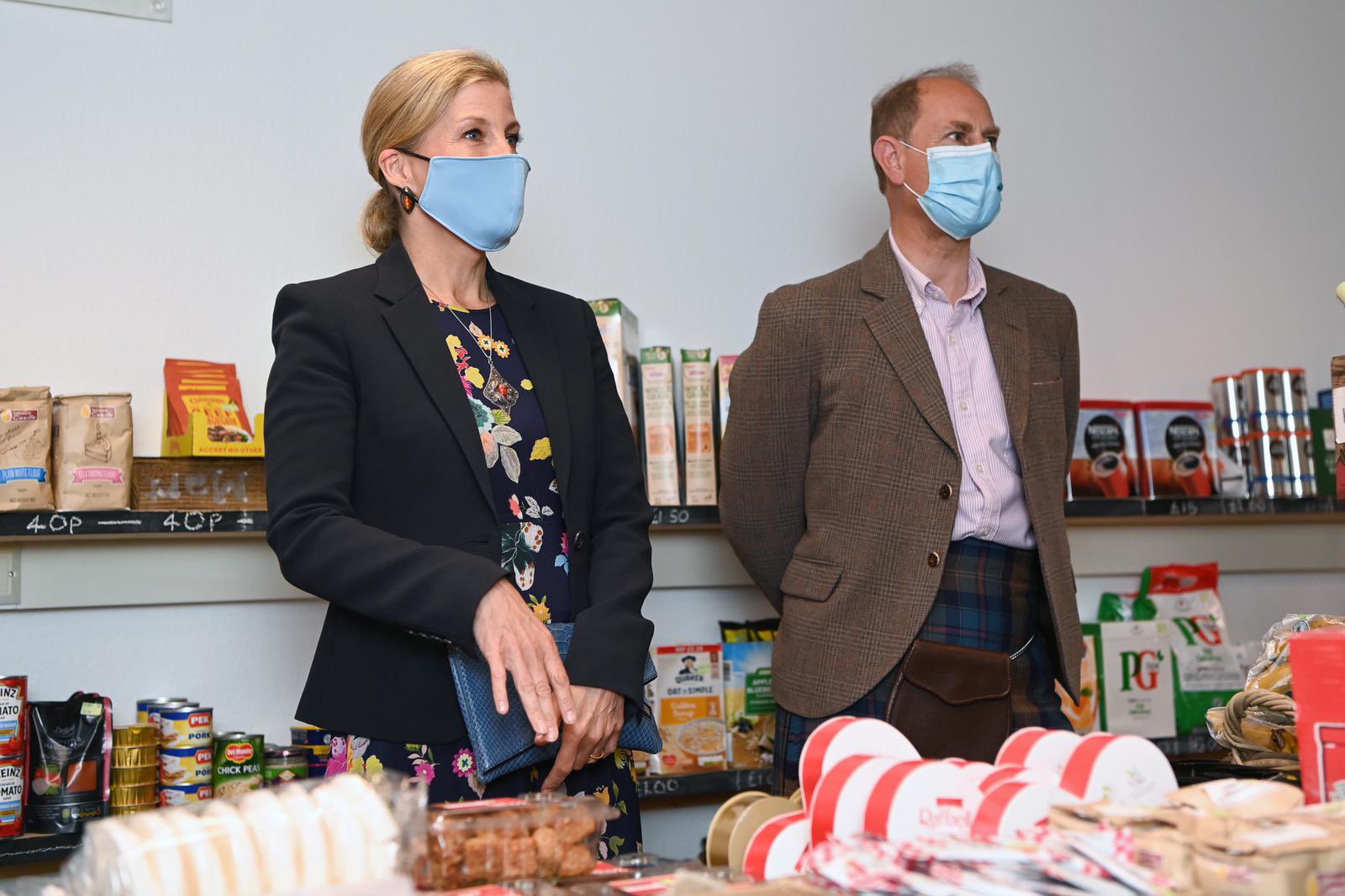 During the visit to S-Mart, Edward and Sophie learnt more about the business and how it works to eliminate food waste by serving the surplus items from larger supermarkets and food suppliers to those in the community. The store has provided over 35,000 meals to the local community throughout the pandemic. 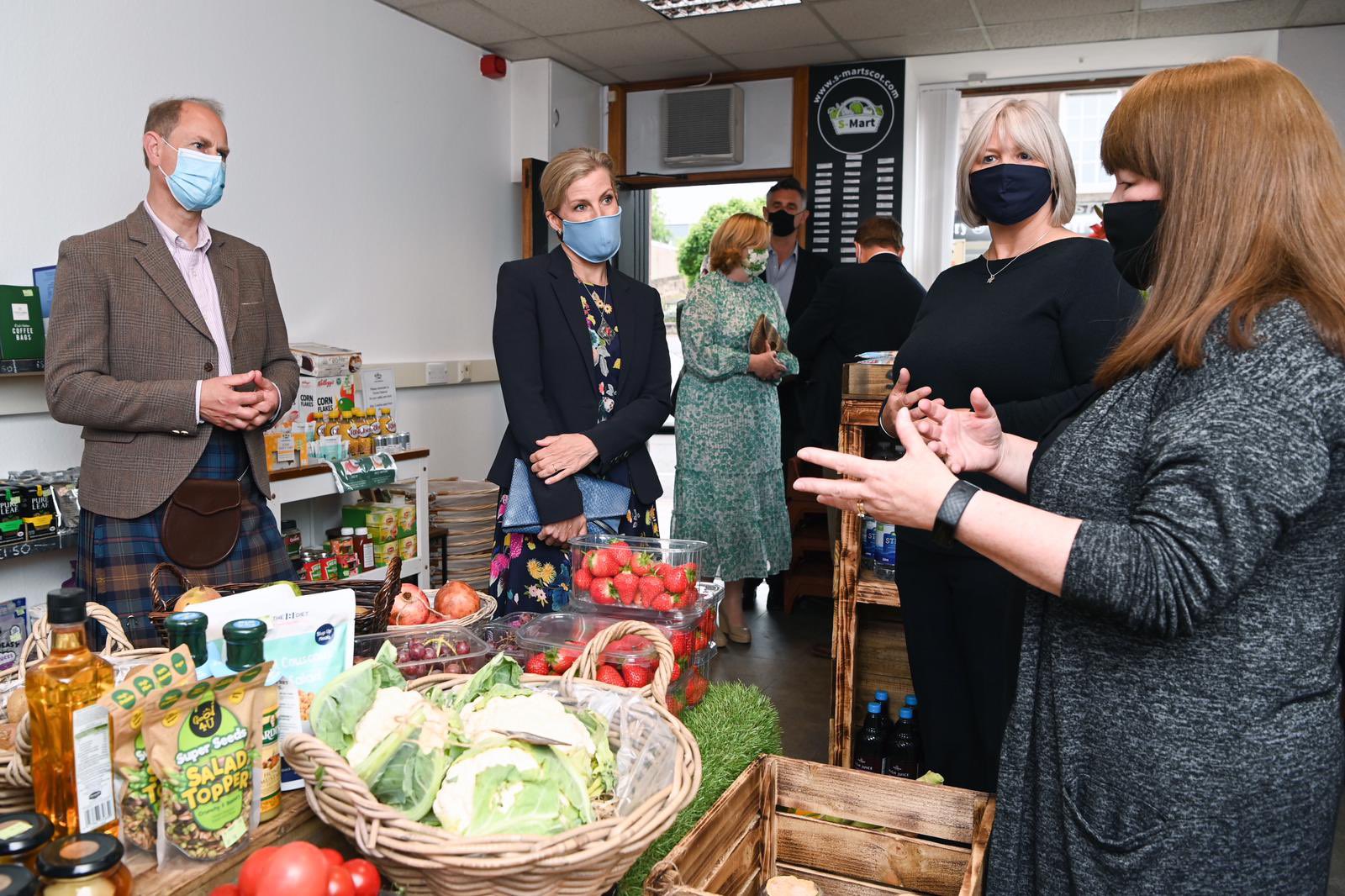 The couple heard how the store has provided over 35,000 meals to the local community throughout the pandemic. (Royal Family/Twitter)

The Countess took a particular interest in the centre as she is an advocate for healthy cooking and healthy eating.

Monday’s visit were hosted by Angus Lord Lieutenant Pat Sawers. Commenting on the royal visit, Mrs Sawers said: “It is a real honour to welcome The Earl and Countess of Forfar back to the town today. They have been so supportive of organisations they met on their first visit and I am thrilled with the way the day has gone.”

On Tuesday, The Earl and Countess of Forfar went to Edinburgh, where they visited the St James Quarter for a tour of the new project, developed by Nuveen Real Estate. Martin Perry, Director of Development at St James Quarter, said: “We were delighted to welcome Their Royal Highnesses to St James Quarter today.

“The team was honoured to showcase the all-new 850,000 square foot shopping arcade and enviable lineup of brands therein, but also to give them a glimpse of the incredible spaces and places that are yet to come.” 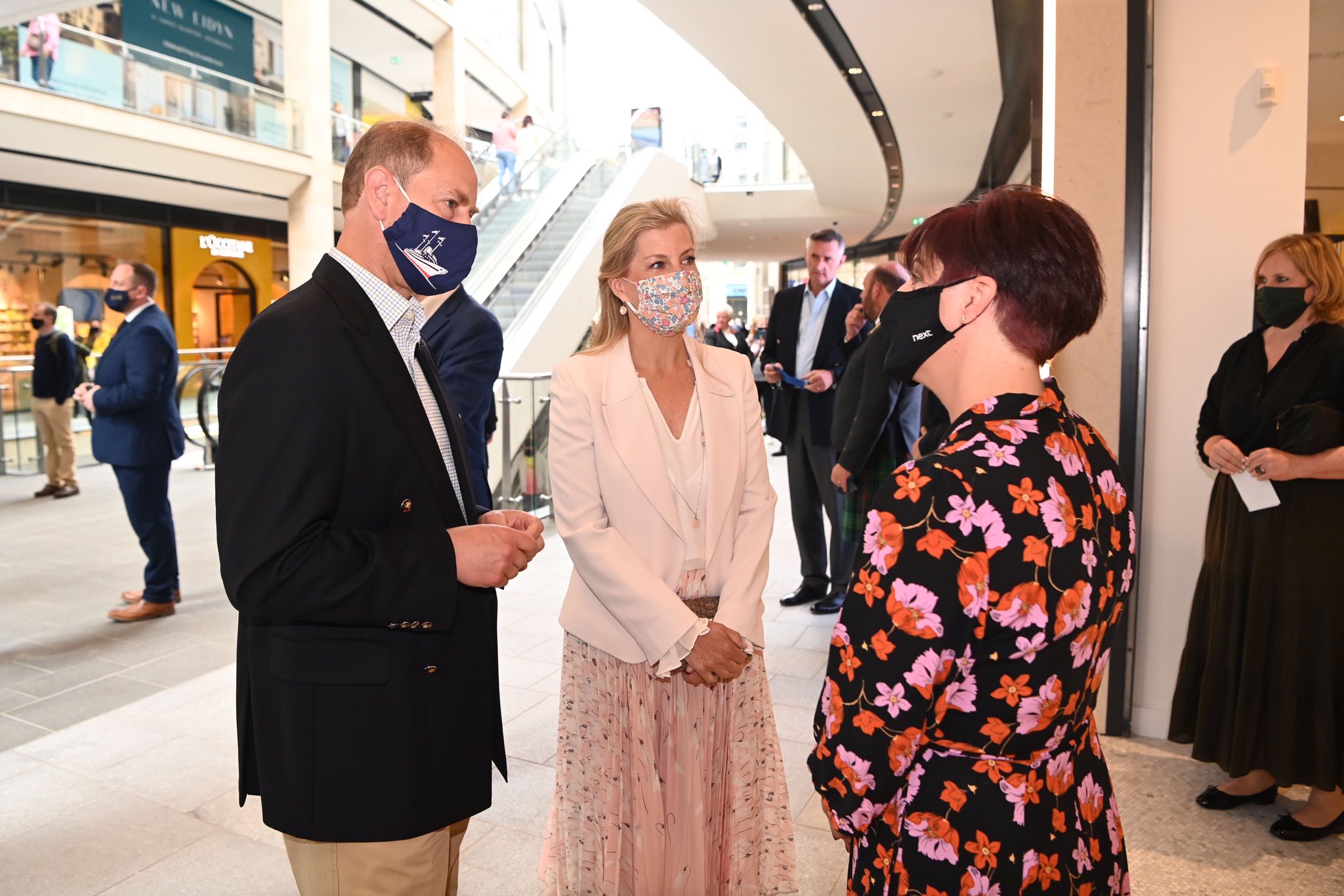 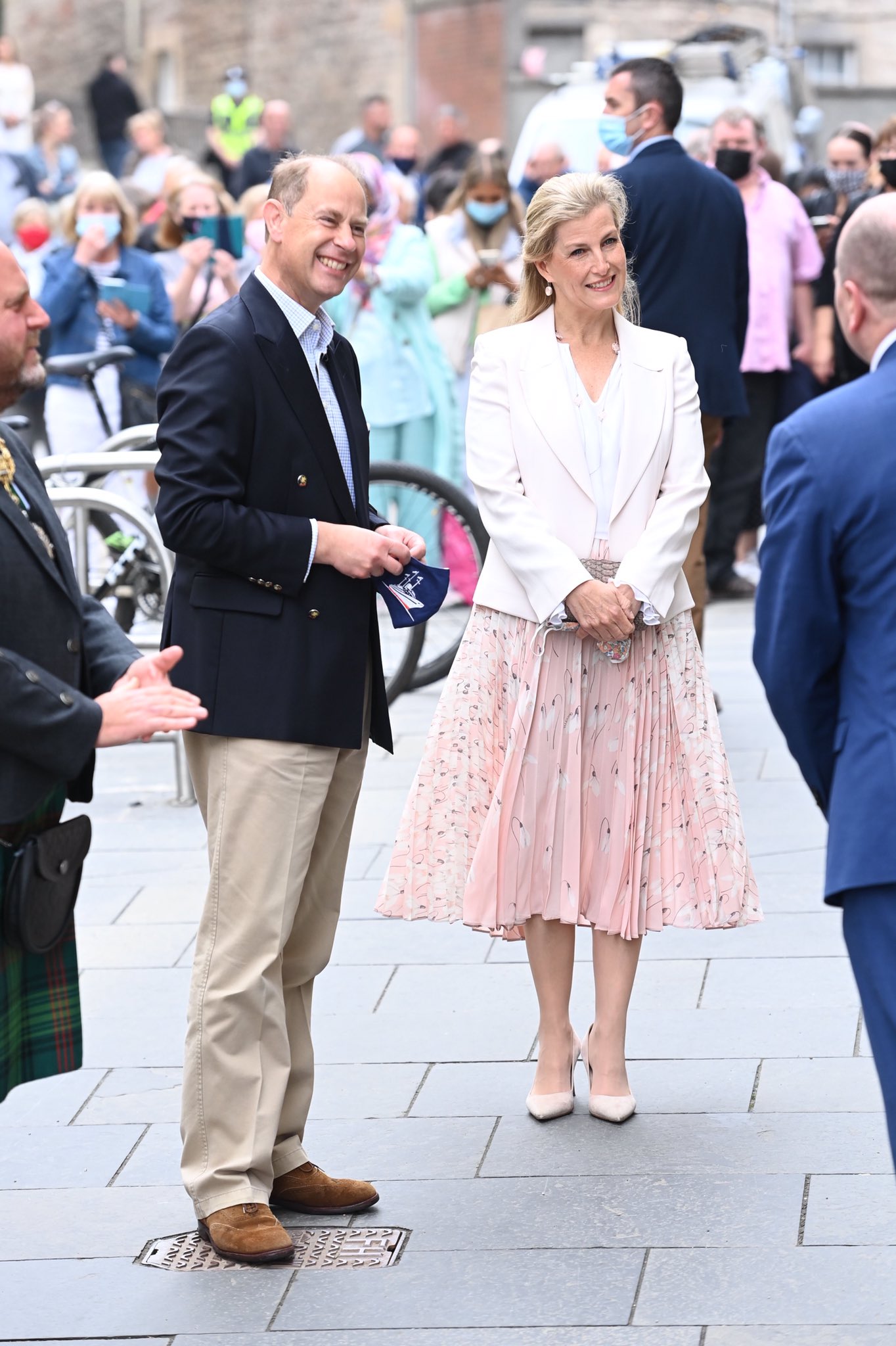 At the shopping centre, the couple were welcomed with smiles and people stopped to take photos of the royal couple. (IMAGE: Royal Family/Twitter).

“We believe in Edinburgh and are delighted to help lead the way as part of the city’s broader economic recovery. Throughout this pandemic, we have never questioned our investment not only in the St James district, but in the city itself. We’re here to stay and we’re here to help.

“Everyone involved has worked incredibly hard over the past five years to bring the vision of the St James Quarter to life and provide a world-class destination in the heart of the capital – and a visit to the Royal Household was a great way to finish out of the phase one opening celebrations.”

After visiting the shopping centre, the couple paid a visit to the famous Royal Mile, where they visited a number of shops to hear how they have been affected by the pandemic. 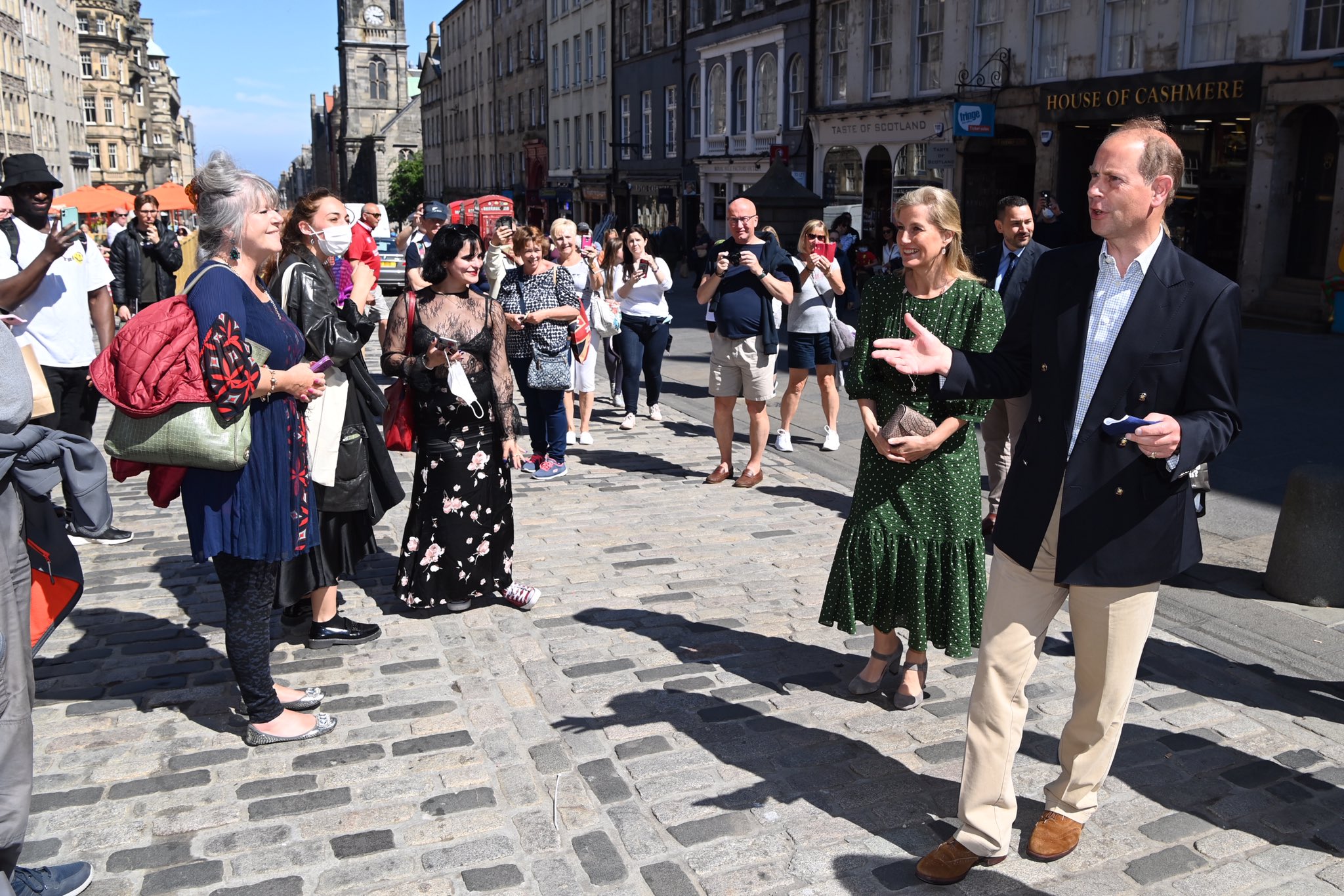 The couple’s final engagement saw them visit the Royal Mile to hear how the pandemic had affected shops on the high street. (Royal Family/Twitter)