Last night, Prince Harry joined a variety of stars at the black-tie Attitude Awards in London, where he accepted the Legacy Award posthumously on behalf of his mother, Diana, Princess of Wales.

Stars at the event included Kylie Minogue, Amanda Holden and Myleene Klass. As the Prince stepped on stage to accept the award, he charmed the audience by saying: “Don’t we all look lovely? Can I stay?”

Prince Harry accepted an award from Attitude magazine on behalf of his mother, Diana (Kensington Palace)

The Legacy Award was given to the late Diana, Princess of Wales, in recognition of the work she had done on bringing attention to HIV and AIDs. In April 1987, Diana opened the UK’s first purpose built HIV unit at London Middlesex Hospital, where she shook the hand of a man suffering with HIV in front of the world’s media, challenging the notion that the infection can be spread by touch.

In an emotional speech, Prince Harry praised his mother’s efforts. “She knew that the misunderstanding of this relatively new disease was creating a dangerous situation when mixed with homophobia. People were being ostracised from their communities – and sometimes from their families – simply for being ill,” Harry said.

Watch Prince Harry’s speech as he collects the @AttitudeMag Legacy Award on behalf of his mother, the late Diana, Princess of Wales: pic.twitter.com/TRkOC7Ttzr

“When she shook the hand of a 32-year-old man with HIV in front of the cameras, she knew exactly what she was doing. She was using her position as Princess of Wales – the most famous woman in the world – to challenge everyone to educate themselves; to find their compassion; and to reach out to those who need help instead of pushing them away.”

Diana’s youngest son went on to say, “I often wonder about what she would be doing to continue the fight against HIV and AIDs if she were still with us today.”

“I believe she would be telling everyone across society – not just those most at risk – that with effective treatment being free and available in the UK, that we must all embrace regular testing – both for our own sake and for those that we love.” 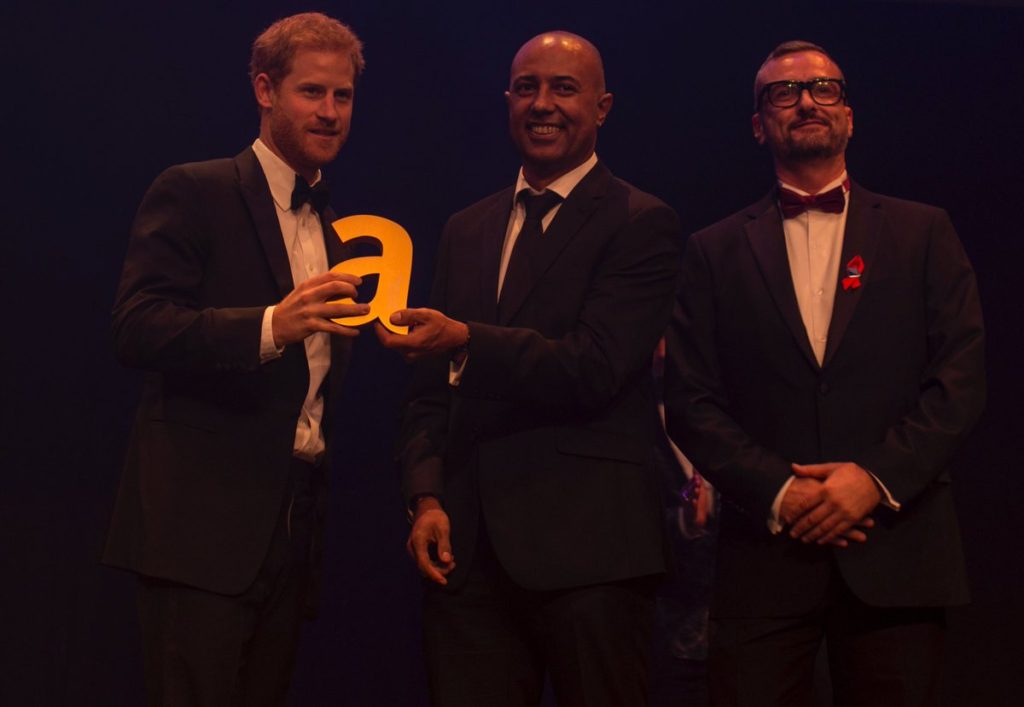 Diana, Princess of Wales, was given a Legacy Award for her work in the field of HIV/AIDs (Kensington Palace)

Harry was handed the award by Ian Walker of the London Lighthouse, and Julian LaBastide, a former nurse at Mildmay Hospital, a specialist centre for HIV rehab and treatment.

Last year, Prince Harry famously took an HIV test himself during a live-steam video with pop-star Rihanna, during a trip to Barbados, to raise awareness and continue his mother’s work. He also set up a charity – Sentebale – to help young people in Lesotho affected by the condition, who also live in poverty.

As the fifth-in-line to the throne accepted the award, Attitude magazine unveiled its new, limited-edition cover featuring a black-and-white photograph of Diana by Patrick Demarchelier.

A spokesman for Kensington Palace said: “Prince Harry was keen to do this as he has continued his mother’s work on HIV/Aids and the awards are in support of the Elton John AIDS Foundation who he has worked closely with.”

I currently study Politics with International Relations at Aston University. I am very interested in current affairs and have a passion for our monarchy and British history. World War II is a very interesting area of study for me. I strongly believe the United Kingdom benefits from a monarchy to protect the unwritten constitution that we have. I would class myself as a traditional person and I enjoy reading historical books. Furthermore I enjoy flying as aviation is another passion of mine. I also enjoy to travel, especially when spending time in quintessential English villages.