Prince Harry has shown his support to bring back National Service in an interview with The Sunday Times.

Captain Wales is due to leave the army next month, and spoke about the positives of joining up in terms of bringing guidance into someone’s life.

‘I dread to think where I’d be without the Army. Bring back National Service – I’ve said that before. 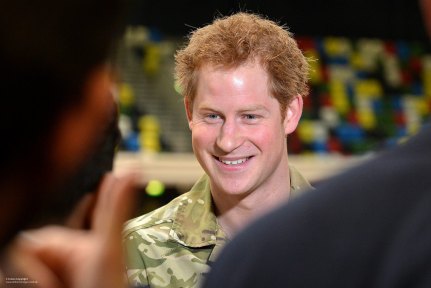 ‘Without a doubt, it  does keep you out of trouble. The Army has done amazing things for me. And more importantly to me, what I’ve seen the Army do to other young guys.

‘You know, I was a troop commander in Windsor for three and a half years, but I had 11 guys under my command.

‘And some of those guys were – I mean naughty’s not the word – they were on a different level. And their backgrounds and the issues they had. And then over those three years to see the way that they changed is huge, absolutely huge.’

Many have called for the return of National Service in a bid to find purpose for wayward youths, and it seems Harry agrees that it helps introduce the discipline that is missing into someone’s life. He also said ‘it’s done no harm, only good’ for himself and his brother, The Duke of Cambridge.

Prince Harry has been at the centre of a number of headlines during his youth, including a fracas with a photographer as he came out of a nightclub. He joined the army in 2005, instead of going to university like his brother.

The 30-year-old Prince also reflected on his 10 year career in the military, which saw him go on two tours of Afghanistan, and allowed him a sense of normality.

‘Different people do it for different reasons. I did it because since I was a kid I enjoyed wearing the combats, I enjoyed running around with a rifle, jumping in a ditch and living in the rain, and stuff,’ he said.

‘When I grew up, it became more than that, it became an opportunity for me to escape the limelight. I’ve had an epic ten years, I’ve had great fun. The Army keep giving me great jobs, and I can never thank them enough for that.’

Harry also had some advice for his nephew and two-week-old niece, Prince George and Princess Charlotte, who will one day be performing Royal duties like him.

‘I would definitely encourage George, and Charlotte if she wants to as well, to have some sort of involvement in the Armed Forces guaranteed. And I know that William and Catherine would probably echo that as well, depending on the situation for them in those years to come.

‘It’s done no harm, just good, for me, and I know it’s the same for William. It’s hard to say anything else on that, because as a parent, it’s your choice,’ he continued.

‘As an uncle, you know, I would say enjoy the role, because at first it’s just pressure, pressure, pressure. And it’s like any job – you’ve got to learn how to do it. And I think everyone seems to think that, when you grow up in this position it comes naturally.’

No royal audience at the Royal Variety Performance...

Earl and Countess of Wessex remember the fallen...