The Princess Royal paid a visit to the East of England on 11th May, carrying out engagements in both Norfolk and Suffolk.

Princess Anne enjoyed what was called an ‘East Anglian away day’ by dropping into at three venues spanning horses, sailing, and a countryside trust.

Princess Anne started her day by visiting the headquarters of World Horse Welfare in Norfolk, which is Britain’s largest equine rescue and rehoming charity.

Anne, who is president of the charity, wanted to find out how the work of World Horse Welfare had continued throughout the pandemic.

She also learnt more about how the charity deals with the increasing number of cases involving large numbers of unhandled horses and met some of the horses and ponies currently in the farm.

The Princess, an equestrienne herself, saw how the staff at the headquarters deal with animals that are not used to being around people, and how they help the ponies get used to being led and enjoy being handled.

The Princess Royal also met with staff and members of the public who have re-homed the horses and ponies as well as  the vet and farrier teams who provide specialist care for the animals.

She then met some of the residents, including a mare and her foal. Rose, the newest foal, was born just three weeks ago to mother Violet, who was a starving mare rescued only just before giving birth. Both are now doing well.

Anne has always had a passion for horses, which was shared with her late father the Duke of Edinburgh. The pair had a close relationship and were often seen attending races together. The Duke of Edinburgh always watched on as his daughter competed during events, as she became a successful equestrienne.

The second engagement saw the Princess visit to Hunter’s Yard in Ludham, where she chatted to staff and members of the friends committee, who work behind the scenes in the organisation.

Arriving by helicopter, Anne spent around 45 minutes at the yard where she was shown a new electric engine and a traditional launch via a greased wooden slide.

Princess Anne visited Hunter’s Yard to hear about the rich history of the organisation based in Norfolk. (IMAGE: Hunter’s Yard/Facebook).

The Hunter’s Yard fleet of 21 historic craft is a rare survival on the British sailing scene which was saved for the county by a huge global effort 25 years ago.

Manager Vikki Walker said it was an informal visit and while it was ‘bit difficult’ conducting royal duties at a distance in line with Covid-19 regulations, the Princess did all she could to make everyone feel at ease, taking a real interest in the mahogany craft and chatting with those around her.

“She is a lovely lady, very personable. She took a lot of time for everyone. Considering she had just lost her father she just soldiered on and made everyone feel at ease.”

Chairman of the trustees, Rev Neville Khambatta, who has sailed from the yard for 50 years, said it was a ‘lovely’ visit, which was especially poignant coming in their anniversary year. Anne is also a keen sailor, an interest she shares with her husband, Sir Tim.

Mr Khambatta said the yard was saved thanks to an appeal launched 25 years ago by the EDP and a crucial donation from the Heritage Lottery Fund who, on his invitation, sent a representative who remembered the grant being handed over.

At the end of the visit, The Princess Royal was presented with a book about the history of the yard.

Princess Anne concluded her day by visiting a Suffolk Wildlife Trust Reserve near Lowestoft, to mark the opening of the new visitor centre, viewpoints, trails and celebrate the trust’s 60th anniversary.

She met some of the key donators, staff and volunteers, who have turned the ambitious vision for Carlton Marshes to become the southern gateway to the Broads National Park into reality.

The Princess Royal heard about a number of developments which have taken place at Carlton Marshes. (@SuffolkWildlife/Twitter).

The National Lottery Heritage Fund awarded a grant of £4.2 million in 2018 to create the vast reserve, alongside £1 million raised by donations and £1 million from legacy gifts.

Anne heard how another £250,000 was invested through the Growing Places Fund by New Anglia LEP, as well as contributions from Essex and Suffolk Water and Sport England. The funding enabled Suffolk Wildlife Trust to buy former bean fields and transform them into a vibrant mix of wetland habitats where Broadland wildlife such as otters and kingfishers can thrive. 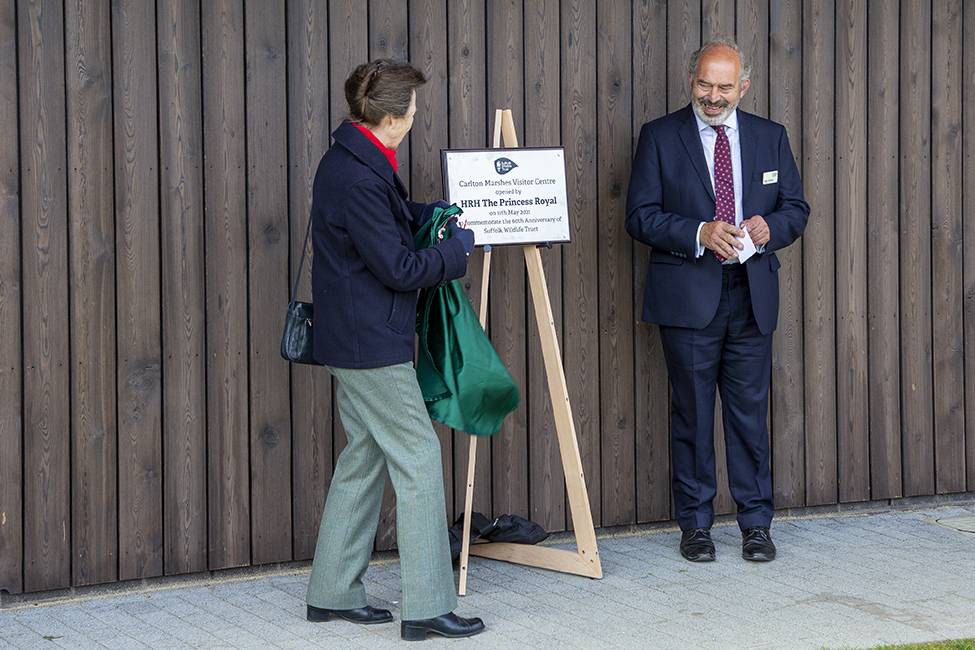 The Princess Royal unveiled a plaque to commemorate the visit. (@SuffolkWildlife/Twitter)

Christine Luxton, CEO of the trust, said she was ‘delighted’ to have the princess visit and added: “With the challenges of coronavirus, it wasn’t possible to open last year as planned, so we are overjoyed to be at a point now where we will soon be able to throw our doors fully open and welcome people in.

“Throughout the pandemic, Carlton Marshes has been a place where local people have been able to walk and escape into nature. Connecting people with nature is incredibly important to Suffolk Wildlife Trust. Few nature reserves have a town as large as Lowestoft on their doorstep, and we know from our visitors that it has been a welcome sanctuary for them over the past year.”

The new grazing marshes and reedbeds are already supporting breeding populations of nationally scarce species including lapwings, redshank, marsh harriers and water voles, and with the reserve’s location on the UK’s most easterly point, it is thrilling birdwatchers to see migration.

Anne took part in a number of walks during the visit. (Suffolk Wildlife Trust).