The British government are promoting staycations for this summer and William and Kate did their bit to promote the idea on Tuesday, visiting south Wales.

The couple visited Barry Island in south Wales for a previously unannounced visit. The Island is most famous as being one of the locations of the popular BBC sitcom ‘Gavin and Stacey’. The show was created by Ruth Jones and James Corden, and ran from May 2007 to January 2010, returning on Christmas Day 2019 for a Christmas special. They also paid a visit to Shire Hall Care Home in Cardiff.

Prince William and Kate have visited Barry Island where they joined in with children playing at an amusement arcade.

They royal couple also spoke with local business owners about the impact Covid-19 has had on the seaside resort.#PrinceWilliam #KateMiddleton #BarryIsland pic.twitter.com/RbRBLOpC5g

Barry and its businesses are just starting to open up following lockdown, and one of the business to open up for the first time on Tuesday was Island Leisure Amusement, and their first punters had a royally good time! The business is the setting for ‘Nessa’s Slots’ in the television show and they sell souvenirs featuring Nessa (played by Welsh actress Ruth Jones) and some of her famous phrases such as the iconic “what’s occurrin’?”.

William and Kate spoke with the owners of the arcade, Hilary and Andrew Phillips, and were shown by the couples grandchildren, Erin, Hollie and Jamie Case, how to play the different games that can be found in the arcade.

The Duke and Duchess, who came ready with some coins to play the games, played Down A Clown and had a go at the grab machine – which proved fruitless for Catherine as her cuddly toy fell from the claw, and Prince William also dropped his own toy. But they didn’t go home empty handed, as Hilary and Andrew presented them with cuddly toys for their three children. 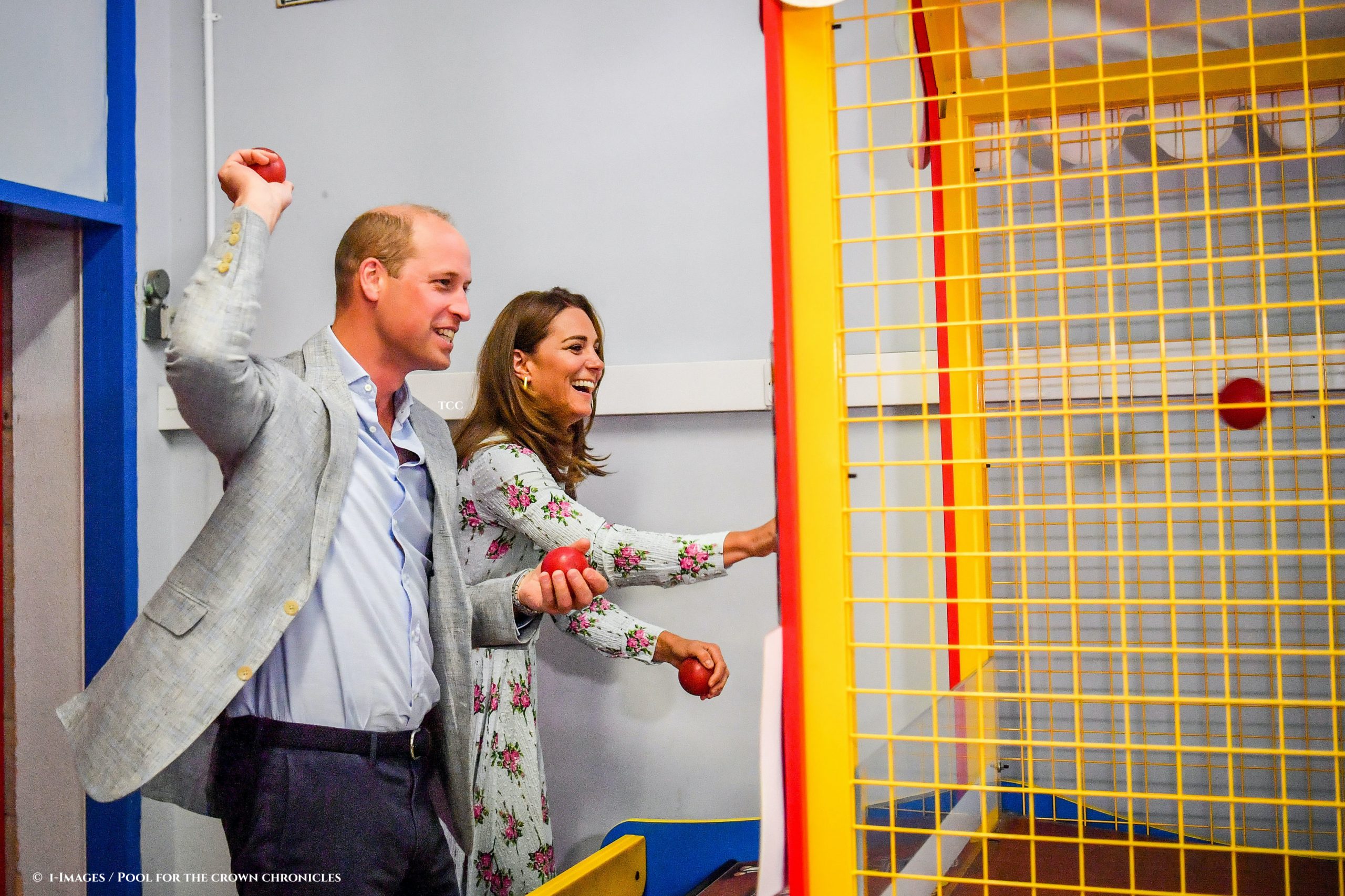 Prince William and Kate, The Duke and Duchess of Cambridge, during a visit to Barry Island, South Wales at the amusement arcade

The couple gave their game tickets to the children so they could redeem prizes, before speaking with Hilary and Andrew more. The couple explained how the business has been in the family since Andrew’s great-grandfather opened it in 1946. There was some talk of Aston Villa, and William congratulated Andrew, when he found out he was a Liverpool fan – but the couple also wanted to know about how people visiting would be protected from the coronavirus.

Look who it is! We had a very special royal visit on #BarryIsland today. Welcome to Barry, Kate and William! pic.twitter.com/sPFgcYvuLN

As they left the arcade, people had gathered to catch a glimpse of the royal visitors. The visit was kept secret so as to stop massive crowds from gathering, but word had spread about the special guests and the Duke and Duchess were more than happy to say hello to those waiting to see them – from a distance of course.

It should also be noted that mask-wearing guidance differs in Wales than it does in England, making it a personal choice to wear a mask.

From the arcade it was over to Marco’s cafe, where the Royals met with local business owners and spoke with 62-year-old Marco himself, who opened the business in 1958. Marco told the couple how he has reopened to tourists and what measures have been taken. Marco told the Duke that he put health over wealth and that he “didn’t want to open until it was safe”.

In series three of the BBC sitcom, the cafe is the workplace of Stacey, played by welsh actress Joanna Page. But William admitted that he has never actually seen the popular show, something a lot of British people will be surprised to hear! Maybe he went home to Anmer and put it on straight away…?

The couple refused the offer of snacks during their visit to the cafe, but were given a goody bag of food for their journey back to Norfolk.

For the last engagement in Barry, Prince William and Catherine arrived on the promenade and were greeted by the MD of Vale of Glamorgan Council, Rob Thomas. They were then shown the beach huts, which have been installed on the eastern end of the promenade as part of the £6million regeneration project for the town. The regeneration project has also seen the promenade and shelter being restored and the installation of new public art and entertainment space, including a climbing wall and water feature.

The Duke and Duchess of Cambridge had a chance to have a socially distanced chat with the Hughes family, who are currently renting one of the beach huts. The family explained to the couple how the huts gave them the chance to ‘come to the beach and exercise’ during the lockdown.

Speaking to Nia Hollins of Vale of Glamorgan Council’s tourism office to learn more about the regeneration project, the future King asked if they can protect tourists from Covid-19. They were told how hand sanitiser is available to all tourists.

From Barry, it was on to the Welsh capital of Cardiff, where William and Catherine popped into Shire Hall Care Home to say hello to the residents again.

In May, during lockdown, the couple had video called with residents and staff of the home and took on the job of bingo callers. Back then 87-year-old Joan Drew-Smit, the winner of the game, said that it “wasn’t as good as it should have been”.

Joan came face-to-face with the royal bingo callers, who had put on masks for the visit, and – after being asked by William if “you remember we did the bingo with you?” – Joan told them both that they had done “a bloody s***y job”.

The couple burst into laughter at the reply, one they wouldn’t normally hear – William later telling staff he loved Joan and wished “everyone was as honest as her”. We can’t imagine too many people are that brave!

During their visit, which took place in a marquee in the grounds of the home, Joan pointed at Catherine and asked William if “Is that your assistant?”

Joan, 87, wasn’t pulling any punches when the Duke and Duchess of Cambridge came to visit a Cardiff care home. The royals played virtual bingo with residents there back in May and Joan told them yesterday what she thought of their bingo calling skills…😂https://t.co/IoddOHYJYP pic.twitter.com/hFtrancaKR

To which Catherine replied with a laugh that she is his assistant and, with a loving hand on her husband’s shoulder, said: “I have been for a long time!”

They were given kinder words by 95-year-old Margaret Stocks, who had enjoyed their game of bingo, with the Prince replying: “We enjoyed it just as much as you did. It was a new experience for us.”

Speaking to staff, the royal visitors were told about the measures they have put in place, and residents’ family members explained how they stayed in touch with their loved ones during lockdown.

Catherine admitted to Pamela Davies, a resident of the care home, that the children ‘were very upset not to have been here’ and William said they would have enjoyed the visit to Barry.

As Nessa might say, it was a lush day in the south of Wales. Tidy.