A Queen’s castle is her home – Windsor Castle

Known for its status as the oldest inhabited castle in the world, Windsor rightly takes its place at the heart of the British Monarchy, and has been a home to many-a Monarch for almost 1000 years. Queen Elizabeth currently uses Windsor Castle each weekend, so it is truly her home.

Occupying 13 acres, the castle is made of both Bagshot Heath stone (a pale grey) and yellow Bath stone. Windsor has been continually inhabited since the 11th century, giving it a long, diverse and interesting history, which will be surveyed here. 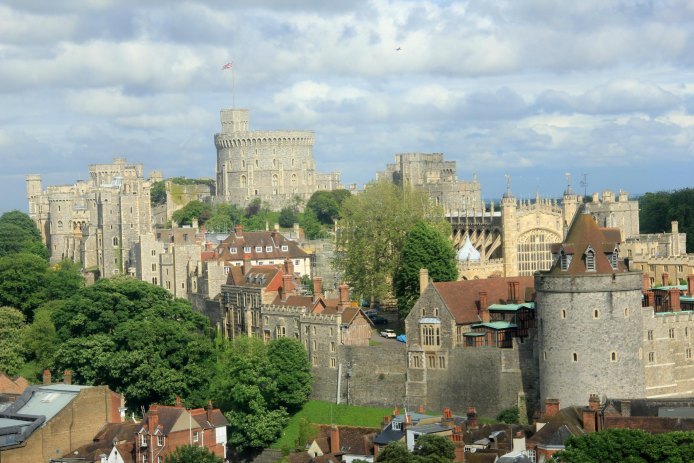 Windsor’s history as a centre for Royal life begins with William the Conqueror, following the Norman invasion of 1066. However, Anglo-Saxon King Edward the Confessor had used his hall at Old Windsor to hold court, giving the area a lengthier connection with Royalty.

By 1086, the castle was completed by William the Conqueror after 16 years of work. William specifically chose the site of the castle for its high ground and view across the Thames, to guard the western approach into London. The surrounding forests made suitable hunting grounds and so the castle was used as a Royal residence too, which has since been home to 40 Monarchs.

The outer walls of the castle today lie on the same foundations of the original walls built by William I. The central mound supporting the Round Tower and the Upper Ward, is also in the same position as those built in the 1070s.

The castle is split into the Upper, Middle and Lower Wards. The Middle Ward was a motte and bailey castle, a typical Norman fortress comprising an artificial mound holding a keep. This is was the Windsor Castle known by William the Conqueror. The motte is 15 metres tall, and the bailey is the castle’s famous Round Tower, which dates from the 12th century.

(l-r)The Lower, Middle and Upper Wards, with the Round Tower on its motte in the centre

The Upper Ward is a number of enclosed buildings, which form the famous quadrangle. The State Apartments, the private Royal Apartments of the current Royal Family and Edward III Tower are located in the Upper Ward, as is the King George VI Gate to the south. The Round Tower creates the western side of this ward and North Terrace and East Terrace adjoin the ward, overlooking the Thames and gardens respectively; both these terraces were created in the 17th century. Beneath the Round Tower sites a bronze statue of Charles II on horseback, mimicking the one of his father in London.

Henry I had domestic quarters within the castle by 1110, while Henry II (his grandson) began to replace the wooden fortifications with more solid protection in the form of stone, including the Round Tower, taking the place of the Norman keep.

Henry II created an official residence in the Lower Ward and a smaller, more private residence on the north side of the Upper Ward, which were improved by Henry III. He also revamped and rebuilt a number of the castle’s interiors.

Further extensions came in the 1360s, courtesy of Edward III, who was actually born at Windsor. He turned it into a gothic palace, spending £50,000 in the process, aiming to create a unified residence for both State and private affairs. St. George’s Hall, in the Lower Ward, was part of this extension, created for the use the new Order of the Garter, Edward’s order of chivalry. Today the hall is often used for banquets, with one long table seating 160 guests.

Inside St George’s Chapel, built by Edward IV but finished by Henry VIII , are the numerous coats of arms of all Knights, of which there can only be 24, plus Royal Knights. Windsor and its Chapel form the spiritual home of the Order, with a service and procession of its Knights each year.

Elizabeth I ordered thorough repairs in many parts of the castle in the 1570s, but less than a century later, the castle was in the hands of Republicans…

The English Civil War saw Windsor used as a prison and headquarters for the Parliamentary republicans. Oliver Cromwell took the castle at the Battle of Edgehill, a huge defeat for Charles I in 1642. Windsor has always been a symbol of the strength of the English, and later British, Monarchy, and so to lose the fortress was a blow. Charles I was imprisoned here before he was put on trial for treason in 1648, and he was buried in St George’s.

The Restoration in 1660 saw the return of Windsor into Royal hands; Charles II reinstated the castle as his residence outside of London. Hugh May modernised the Royal apartments, creating the grandest baroque apartments in the country by 1683. The ‘Merrie Monarch’ is also responsible for the ‘Long Walk’ at Windsor, which is over 4km long! Royal News

The Long Walk at Windsor Castle is over 4km long.

George III was next to use Windsor Castle as a main residence, his predecessors favouring the palaces of Hampton Court and Kensington. The baroque apartments of Charles II had survived almost untouched until George ascended the throne, and so the King then renovated their exteriors in a neoclassical style but retained their interiors. In 1796, James Wyatt updated the castle’s outer walls in a gothic restoration.

The Round Tower was extended under George IV by 9 metres to give a more intimidating structure, though it has since been criticised as being out of proportion. George also added the many towers and battlements to the Upper Ward, which were specifically designed to be dramatic. The Waterloo Chamber was part of the King’s remodelling of Windsor; this room was finished in the 1820s, and it displays portraits commemorating the defeat of Napoleon at Waterloo in 1815. The total works cost £300,000.

The Upper Ward has a dramatic and imposing silhouette; this also shows the high ground upon which Windsor sits and the vast forests surrounding it.

Victoria opened Windsor’s state apartments to the public in 1845. Sadly, Prince Albert died in 1861 at Windsor, which is where the couple spent most of their time.

During WWII, Princess Elizabeth and Princess Margaret lived at Windsor for their safety, and their bomb shelter lay under the castle. The Crown Jewels were also kept at Windsor during this time, in hat boxes in the cellars!

1992 is what The Queen described as her ‘annus horriblis’, following a devastating fire at Windsor Castle, and the separation of The Prince and Princess of Wales. The blaze began in Queen Victoria’s private chapel, and after 15 hours and 1.5 million gallons of water, the fire was put out, but not before the fire damaged 20% of the castle, including the ceilings of St George’s Hall, the Grand Reception Room, the private chapel, the State Dining Room and the Crimson Drawing Room.

The restoration following such a fire cost £37 million, and was finished late 1997. Most of the money was raised from the opening of Buckingham Palace’s State Rooms in August and September, when The Queen vacates to Balmoral for summer. This is, perhaps, one positive that came from the fire, as the Palace opens every year with new exhibitions for the public to see.

The Royal Archives are located at Windsor, in the Round Tower (which actually has a square southern side). An extension, finished in 1993, gave extra room for the archives, though the original hollow interior provided some of this space.

The Queen splits her week between Buckingham Palace and Windsor Castle, also spending a month at Windsor for Easter Court. Her Majesty then enjoys a week here each June, to attend Royal Ascot and the service of the Order of the Garter.

If you cannot reach Windsor, why not take a short virtual tour of the castle:

Windsor is open daily from March to October, but check for times and any closures here.