Remember, remember the 5th November…James I and Bonfire Night

An unusal celebration that is only found in the UK, Bonfire Night – sometimes called Guy Fawkes Night – is celebrated on 5th November each year. But what is Bonfire Night and why do we celebrate it?

“Remember, remember, the 5th of November, gunpowder, treason and plot.” The first line of this well-known ditty might give you some idea as to what Bonfire Night entails…

The consiprators. via Wikimedia Commons

It was on 5th November 1605 that a Catholic plot was underway. The aim of this plot? To kill James VI & I, his wife and sons, and put his daughter on the throne to run a Catholic regime in England once more.

The reason that this group of Catholics were so determined to kill James, was that he hadn’t granted more freedoms to Catholics in England, nor revoked penal laws against them. James’ wife, Anne of Denmark, was a well-known Catholic who had converted at some point before James became King of England, and the King was also a broad-minded man, accepting there were different opinions on religion.

It is thought that Robert Cecil had convinced the King that to assist the Catholics in any way, such as revoking penal laws, would only encourage conversion to the Papacy, which could lead to a dangerous situation.

Guy Fawkes, was not, as many think, the leader of the group, which was about 14-strong. Robert Catesby gathered like-minded Catholics who were willing to go to extreme lengths for their faith, and was the mastermind behind the idea.

Guy Fawkes was one of the last to be brought into the fold, having been working as a mercenary with the Spanish Army. As such, he was an expert on the use of gunpowder, and proved a useful part of the team.

The Gunpowder plot: what happened?

The plot, also known as the Jesuit Treason, began with just five men, meeting in the Duck and Drake Inn in May 1604. Catesby, Thomas Wintour, John Wright were three of the original conspirators, and the plan was always to use gunpowder.

Wintour, despite his protests and doubts, was sent abroad to find support for this mission, persuaded by Catesby. He met with officials of Spain, ironically exiled men from England, in the Spanish Netherlands, who said their plan would receive no support from Spain. Wintour was, however, introduced to Guido Fawkes, and the pair returned to England the following month.

They planned to use gunpowder beneath the Houses of Parliament during the State Opening to kill James, his wife and two sons, Prince Henry, the Prince of Wales, and Prince Charles, the Duke of York. The senior Bishops of the realm would be there as members of the House of Lords, as would senior judicial figures, and James’ ministers: the explosion would wipe out the ruling elite of the country. At the same time, some of the other conspirators would rally Catholics in the Midlands, to revolt and form a Catholic government, having kidnapped the young Princess Elizabeth, heir to the throne after the deaths of her family.

The group was renting a house close to the Houses of Parliament, under the inconspicuous name of ‘John Johnson’. Over the course of a few weeks, they managed to smuggle 36 barrels of gunpowder into a cellar of the House of Lords, the space beneath the building being used as rented storage.

Parliament was originally due to open in the summer, but bouts of plague postponed it until November, meaning damp weather, and the halt of the disease.

Guy Fawkes was to be the one to light the fuse, then escape and leave London, following his fellow conspirators north. However, the plan began to unravel.

An anonymous letter was sent to the Baron of Monteagle, warning him not to go to the House of Lords for the opening of Parliament, hinting at an explosion. This was only received late in the evening of 4th November, and was passed on to Robert Cecil, James’ spymaster, which led to a search of the Parliament’s cellars.

Some think that Cecil himself created this letter, having known about the plot from his spy network for a while, but chose to wait until the 11th hour to impress the King. 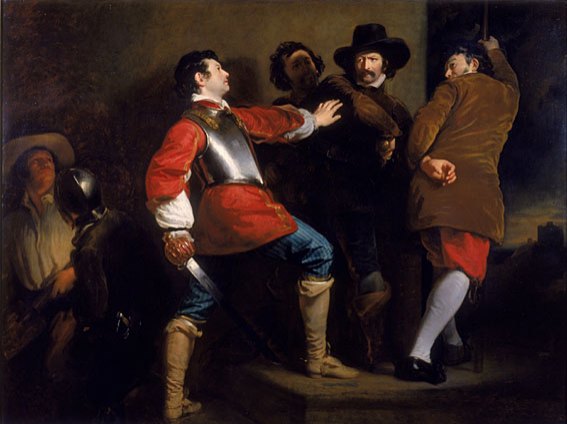 Fawkes was found in the cellars, along with the fuse and 36 barrels of gunpowder. He was arrested and taken to the Tower of London, to be interrogated. As news spread of the arrest, the plotters in London fled north.

DID YOU KNOW…? Physicists from the Institute of Physics have calculated that the 2,500kg of gunpowder beneath Parliament would obliterated an area 500 metres from the centre of the explosion – and even if it truly was damp powder, it would still have gone off, due to it being packed into barrels like a cannonball, with the wood giving the flames a boost.

Meanwhile, Catesby, John Wright and Bates had already left for the Midlands for the planned uprising. Ignorant of the commotion caused by Fawkes’ discovery in London, they eventually made it to Catesby’s home, then on to Dunchurch. Here, they were misinformed that the explosion had worked, and James and Cecil were dead.

The following day, they raided Warwick Castle for supplies, before continuing to Norbrook to collect stored weapons. Catesby sent a letter, asking to raise an army in Wales, where they believed support for the ‘true faith’ was strong.

Thomas Wintour met the trio at Huddington that afternoon, informing them the plot had failed. Despite this, Catesby persuaded his group that a rebellion was still possible, and went on to other large houses, calling for local support and taking weapons and ammunition. Finally, they reached Holbeche House, on the Staffordshire border.

Tired and desperate, the group lit a fire and tried to dry out some of their gunpowder to use when the time came. Although gunpowder does not explode (unless physically contained), a spark from the fire landed on the powder and the resultant flames caught Catesby, Rookwood, Grant, and another man. Just Catesby, Rookwood, the Wright brothers, and Percy and John Grant, who was blinded in the fire, remained: John Wintour and Digby left, likely to give themselves up, preferring not to delay their inevitable fate, and Thomas Bates fled, along with Robert Wintour.

The local sheriff and 200 men besieged Holbeche House on the morning of 8th November. Shots were fired, hitting Thomas Wintour in the shoulder. John Wright was also shot, followed by his brother, and then Rookwood. Catesby and Percy were killed by the same bullet. The survivors were arrested and the dead buried near Holbeche, and the bodies of Catesby and Percy were exhumed and decapitated.

The consequences of plotting against the King

Fawkes had plotted treason, and this meant his punishment would be death, but the authorities knew he couldn’t have acted alone. Though torture was illegal, Royal Prerogative could grant such permission, which James did; his orders stated ‘the gentler tortures are to be first used unto him, et sic per gradus ad ima tenditur [and thus by steps extended to greater ones]’.

Maintaining his cover of John Johnson, Fawkes was tortured in the Queen’s House at the Tower; there, he was likely manacled to the wall, and it is almost certain he was put on the rack. Finally, on 7th November, he confessed and gave up Catesby’s name. His signed confession shows how weak he was. 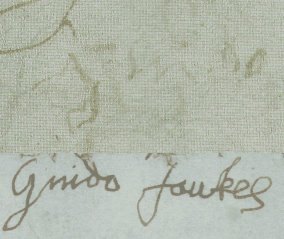 Fawkes two signatures – top is after his torture, where you can just make out ‘Guido’, showing how weak he was. Wikimedia Commons

The traditional death for traitors in 17th-century England was to be hanged from the gallows, then drawn and quartered in public. On 30th January 1606, Digby, Robert Wintour, John Grant, and Bates were dragged through London on wooden panels to St Paul’s for their executions. Digby was first, and suffered being publicly castrated, his abdomen opened up and innards taken out, with the other three following soon after.

Fawkes, knowing what awaited him, chose his own fate: at the gallows on 31st January, standing alongside Thomas Wintour, Rookwood and Keyes, he jumped from the scaffold. The rope broke his neck, and so he was spared the pain of his punishment. Keyes also jumped, but survived the drop and was led to the quartering block.

Londoners were encouraged to light bonfires following the plot’s discovery, to celebrate the King surviving an evil Catholic plot, ‘always provided that this testemonye of joy be carefull done without any danger or disorder’. Effigies of Guy Fawkes began to be burnt on the fires to show the people’s disdain for the Catholic man in the cellar.

Parliament created 5th November a holiday in the first session of 1606, with the Observance of 5th November Act: services and sermons were to commemorate the event annually. The act remained in force until 1859, and so 5th November became known as Bonfire Night, or sometimes Guy Fawkes Night.

Fireworks began to be used in the celebrations a short time after 1605, to represent the gunpowder that wasn’t used, though other reports say it was in the 1650s that the decorative explosions were first used. After James, Duke of York, made his conversion to Catholicism public in the late part of 1670s, effigies of the Pope began to be burnt. In Lewes, Sussex, this is still a common practice, though the religious meaning of this celebration has long since been lost.

Next articleIn defence of Charles I – a misunderstood King? Part INext

Prince William at 40: the importance of tackling homelessness