Tell me about… The State Opening of Parliament

The State Opening of Parliament, the main ceremonial event of the Parliamentary calendar, happens each year in May, and is the formal occasion when The Queen calls Parliament to begin a new session. The 2015/16 Parliament will be opened tomorrow, 27th May.

The observance, which takes place in the House of Lords, is full of tradition and pomp, and, as well as officially opening a new session of Parliament, also sets the political agenda for the year, through The Queen’s Speech.

You may watch last year’s opening in a video towards the end of this article.

What happens during the State Opening of Parliament?

The State Opening of Parliament begins a while before The Queen arrives at Westminster. It actually starts with the searching of the cellars hours beforehand.

The Yeomen of the Guard, the oldest of the Royal bodyguards, search the cellars beneath the Houses of Parliament. This is a precaution to prevent a modern-day attempt at the Gunpowder Plot; in 1605, a Catholic plot hoped to assassinate James I and his family to put a Catholic on the Throne, by blowing up barrels of gunpowder in the cellars of Parliament.

After, members of the House of Lords, dressed in their robes, gather in the Upper Chamber of Parliament; MPs, meanwhile, gather in the Commons. Foreign ambassadors and diplomats, and the Judiciary also attend the opening.

A ‘hostage’ is taken for the duration of the opening. Before The Queen leaves Buckingham Palace, the Treasurer, Comptroller and Vice-Chamberlain of the Household (all of whom are Government whips) deliver ceremonial white staves (rods) to The Queen. 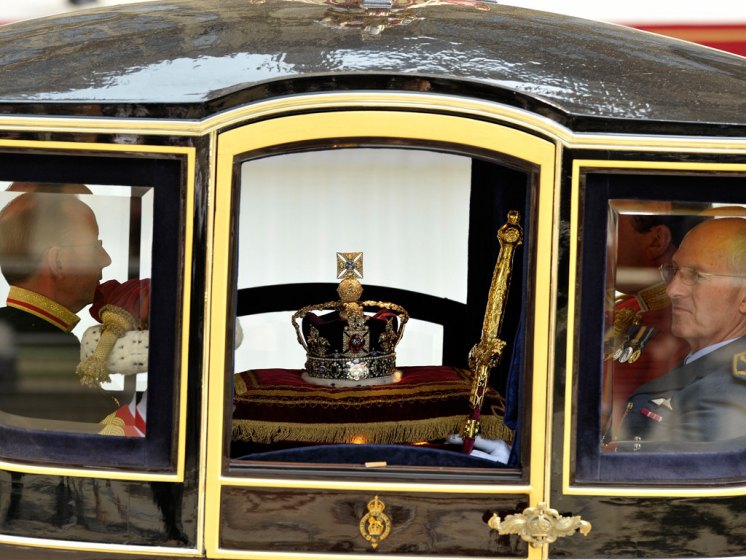 Her Majesty keeps the Vice-Chamberlain ‘prisoner’ under guard at the Palace for the duration of the ceremony, to ensure her safe return; this is a tradition that began with Charles I. The King, whose relationship with Parliament was poor due to a number of autonomous actions on his part, would take an MP out of Parliament to ensure his personal safety.

The Imperial State Crown, the Cap of Maintenance and Sword of State, which are used for the ceremony, travel in a coach preceding The Queen’s arrival. Her Majesty, usually accompanied by Prince Philip, and occasionally Prince Charles, then leaves Buckingham Palace for the Palace of Westminster, travelling in a State Coach; she is escorted by the Household Cavalry.

*The Duke of Edinburgh last attended a State Opening in 2017, ahead of his retirement. Since then, The Prince of Wales has taken his place.

Interestingly, the State Opening of Parliament is the one event in the year where Her Majesty, the House of Lords and House of Commons meet. 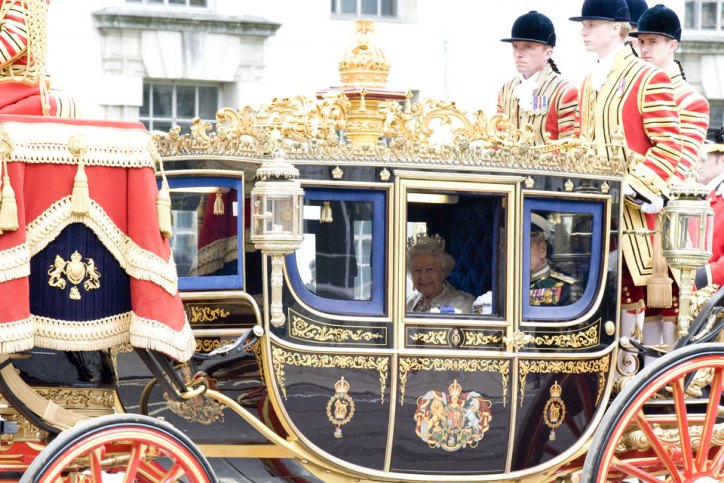 The Queen arrives at Sovereign’s Entrance of Westminster, which flies the Royal Standard, and she proceeds to the Robing Room. The Sovereign passes dismounted Household Cavalry soldiers in full dress with drawn swords – they are the only troops allowed to bear arms within Royal Palaces.

Here, Her Majesty puts on the Imperial State Crown and the Robe of State for the ceremony. The Queen then leads the Royal Procession through the Royal Gallery in front of 600 guests, to the chamber of the House of Lords for the main event.

The Royal Procession through the Royal Gallery

Her Majesty takes her seat on the Throne in the chamber, and instructs those around her: ‘My Lords, pray be seated’.

The Lord Great Chamberlain then signals to Black Rod, with a white wand of office raised, to summon the MPs – no Monarch has set foot in the House of Commons since the actions of Charles I in 1642. Black Rod (or ‘Gentleman Usher of the Black Rod’) is The Queen’s representative in Parliament.

Walking to the Commons chamber, ‘Hats off, Strangers!’ is shouted to those who line the route. Upon reaching the chamber, the doors are shut in Black Rod’s face. Charles I tried to arrest five MPs whilst they were sitting in Parliament; this symbolic action shows the Commons’ independence from the Monarch, which largely began with the English Civil War.

Black Rod then bangs three times on the door with the rod he carries, which represents his office. The door to the Commons Chamber is opened and he says ‘Mr Speaker, The Queen commands this honourable House, [pauses to bow to both sides of the House] to attend Her Majesty immediately in the House of Peers’.

This is a reminder of the right of the House of Commons to exclude everyone, save the Sovereign’s messengers.

Black Rod knocks to be admitted

All MPs – deliberately talking loudly – follow him back to the House of Lords to hear The Queen’s Speech. MPs bow to Her Majesty, and stand at the opposite end of the chamber to the Throne to listen to the speech; this area is known as the Bar of the House. 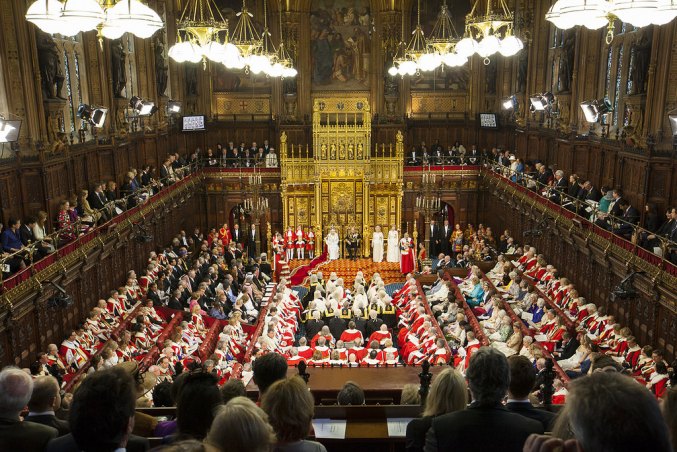 Her Majesty is then presented with her speech by the Lord Chancellor. The speech is traditionally written on goatskin vellum, and presented to the Monarch on bended knee.

The Queen gives her speech, which is around 10 minutes long, and outlines government proposals for the coming year. The Speech from the Throne, or The Queen’s Speech, is written by the Prime Minister and his Cabinet, and is signed by The Queen.

The Queen refers to ‘my Government’ throughout the speech, and keeps a neutral tone, to show neither approval nor disapproval. She also mentions any State Visits that she intends to make during the session of Parliament, and also speaks of any planned State Visits by foreign Heads of State. 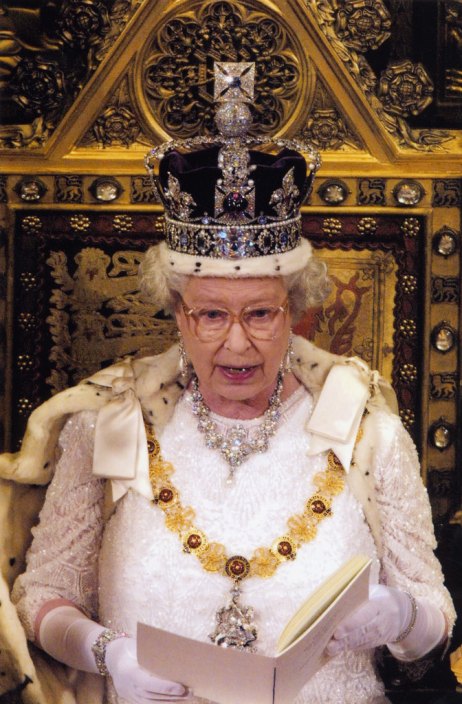 The speech is finished with the words: ‘My Lords and Members of the House of Commons, I pray that the blessing of Almighty God may rest upon your counsels’.

The Queen then departs the House of Lords, and the MPs return to their chamber. Her Majesty’s role in the ceremony is now finished, but events continue without The Queen.

Members then debate the content of the speech, with both chambers giving an ‘Address in Reply to Her Majesty’s Gracious Speech’. The first speech of the debate in the Commons is traditionally a humorous one, and the ensuing debate lasts for a few days, with different topics being discussed.

Where does the tradition of a State Opening come from?

By the 14th century, the opening of Parliament had become something of a ceremony, following established rituals.

During the Tudor dynasty, Parliamentary opening became a symbolic act, as the King did not attend every sitting of Parliament, and also drew crowds, much like today. An illustration of the 1523 State Opening of Parliament shows similarities to the modern event, including a robed Monarch, MPs standing at the Bar to the House, with the Speaker in the centre.

Since Charles II, the Sovereign has generally given a speech; the exceptions are George I, who spoke but a few words of English having grown up in Germany, and Queen Victoria, who – following the death of Prince Albert – could not bring herself to speak.

Has Her Majesty opened Parliament every year during her reign?

The Queen has opened Parliament every year except 1959, and 1963, when she was pregnant with Prince Andrew and Prince Edward respectively.

Duchess of Cornwall launches season five of her Reading Room