19th February 2021: Sky News – Harry and Meghan will not return as working Royals

Looking behind the scenes of the royal residences, Victoria appeared in episode 1 in relation to the Diamond Jubilee carriage.

William Crawley spoke to Victoria, Joe Little of Majesty Magazine and two others about the war of words between Prince Andrew’s legal team and lead prosecutor in the Jeffrey Epstein case, Geoffrey Berman, who claims the Duke isn’t cooperating in the Epstein investigation.

Our editor talks about the bumpy road The Prince of Wales and Duchess of Cornwall took to eventually be together. Catch up here.

The Queen Mother was seen to be a figure of duty and hope during the Second World War. Victoria Howard speaks of how the Royals were a target, but them staying in London was a morale boost for Brits, alongside historians Prof. Kate Williams, Prof. Anna Whitelock and Dr Suzannah Lipscomb.

Victoria talks to Sophie Ridge about the announcement that The Queen has recorded a video message for the nation, to air this weekend.

After a bumpy year in 2019 – with Prince Philip’s car accident, the terrible Prince Andrew interview, Her Majesty being used as a political pawn in the prorogation quarrel, and The Duke and Duchess of Sussex making their problems so public, Victoria looks back at The Queen’s last year and the impact it has had.

Channel 5/TwoFour Productions: Inside the World’s Greatest Hotels – the Ritz and the Dorchester

Victoria Howard acted as a ‘talking head’ in two episodes of the Channel 5 documentary, ‘World’s Greatest Hotels’, discussing the royal connections and history of the Ritz and the Dorchester hotels, from Prince Philip’s stag do, to Edward VIII and Wallis Simpson’s affair. Aired 31st January 2020 and 7th February 2020.

23rd January 2020: US Weekly’s “Royally Us” – dissecting the Harry and Meghan story

A new segment for Us Weekly, Royally Us dissected the news of The Duke and Duchess of Sussex’s future outside the Royal Family. Editor Victoria spoke to Christina Garibaldi, and HuffPost royal reporter, Carly Ledbetter.

Colin Brazier asked editor Victoria Howard about the current situation regarding The Duke and Duchess of Sussex.

We heard from Prince Harry at a Sentebale event, giving his version of the story. Victoria spoke to various BBC local radio stations, including BBC Gloucester, BBC Jersey, BBC 3 Counties, BBC Norfolk, BBC Northampton, BBC WM, BBC Hereford and Worcester and others about the resolution in the royal crisis, to determine Prince Harry and Meghan’s future.

Victoria speaks about the furore surrounding The Duke and Duchess of Sussex’s decision to leave their Royal Family roles.

Shane discussed the talks at Sandringham ahead of time with our editor, Victoria.

Victoria joined Ben Thompson and Rachel Burden on the sofa, to talk about the Sandringham Summit.

Victoria joined Charlie Stayt and Naga Munchetty on the sofa to discuss the bombshell news of The Duke and Duchess of Sussex wanting to step back from senior royal roles.

A look at the Royals heading to Church on Christmas Day – with Prince George and Princess Charlotte making an appearance – plust The Queen’s festive message.

Victoria spoke to O, The Oprah Magazine about the use of family photos in The Queen’s Christmas speech, after the palace released a photo and excerpt from the message. Full article here.

Victoria speaking to Kimberley about The Duke f York’s Newsnight interview with Emily Maitlis, which aired on 16th November, discussing his relationship with Jeffrey Epstein and the accusations made by Virginia Roberts.

It was announced that The Duke and Duchess of Sussex will not be attending Sandringham for Christmas with The Queen this year; instead they will spend it with Meghan’s mother, Doria. Victoria discusses with Toney Livesey and Chloe Tilley on 5 Drive Time.

Charlie Stayt and Naga Munchetty speak to Victoria about the timing of and reaction to Prince Harry’s phone hacking lawsuit.

Victoria discussed the breaking news of The Duke of Sussex’s lawsuit against The Sun and The Mirror.

Victoria talks about the arrival of the newest Royal, The Earl of Dumbarton.

– BBC News – The Duke and Duchess of Sussex have a son

Talking to Aidan and Lucy about Baby Sussex, The Earl of Dumbarton, alongside Robert Jobson.

The Good Morning Wales show spoke with Victoria about the accident involving The Duke of Edinburgh.

Talking the implications of The Duke of Edinburgh’s car accident near Sandringham aged 97, Victoria suggests The Queen will be having a conversation with her husband about if it’s time to leave the driving to staff.

Discussing The Duchess of Sussex with Kate Thornton alongside Liz Brewer; also talking about how royal and celebrity go so well together.

The Queen received Donald Trump for tea at Windsor – what were they going to talk about? Victoria spoke to James Coomarasamy about the historic visit that wasn’t quite the fanfare of a state visit.

Victoria talks to Germany’s ZDF about Prince Louis’ christening and that it was a shame The Queen did not attend.

(from German TV in German) pic.twitter.com/xsqfUw4K8D

21st May 2018: The Courier Mail in Brisbane – ‘New bride rides wave of goodwill’

A short quote from Victoria on Meghan’s ‘waving technique’.

Short interview with German site Bunte.de from Windsor, discussing the royal wedding, Meghan’s dress and what might go wrong. Read the full article and watch the video here (in German).

Victoria Howard speaks exclusively to Bunte.de about her thought on the royal wedding

Reporter Stephen Taylor talks to the BBC about the history and traditions of royal weddings, live from the Long Walk at Windsor Castle.

– BBC Breakfast with Naga Munchetty: the royal wedding build up

Victoria Howard speaks about the build up to the big day on BBC Breakfast from the grounds of Windsor Castle, alone and alongside Julie Montagu, Viscountess Hinchingbrooke.

Adrian Chiles is in Windsor today for all the build up to Harry and Meghan’s big day.

– BBC Breakfast with Louise Minchin and Dan Walker: will Meghan’s dad be walking her down the aisle?

Victoria Howard spoke to Tony Livesey and Rachael Bland about the newly-announced name of the royal baby – and Abba’s ‘Dancing Queen’…!

The royal baby’s arrival on St George’s Day attracted media from across the globe. Victoria Howard speaks about the historic moment, which sees Princess Charlotte retain her place in the succession thanks to a change of law in 2013.

More royal baby discussion including name favourites, and how many names the Prince will have with Paul Coia.

– Radio 5 Live with Nicky Campbell – the Commonwealth deciding who will succeed as its head.

We will post a clip if one becomes available to us.

Meghan was due to make her first official appearance as a soon-to-be member of the Royal Family at the Royal Foundation Forum with her fiancé, Prince Harry, and brother- and sister-in-law, The Duke and Duchess of Cambridge. Victoria chatted to Dan Walker and Louise Minchin.

Talking about MBEs, OBEs and CBEs – and all the other bits – on BBC Radio 2.

16th February 2018: HuffPost UK – From Scotland To The Seychelles: Where The Royals Honeymoon

Speculation over Prince Harry and Meghan’s honeymoon destination led to a look back at other royal honeymoons. Read the full post here.

Talking Prince Harry and Meghan’s upcoming nuptials – including the ‘hag’ do (joint stag and hen do), the bridesmaids and what The Queen will wear – on Heart Breakfast Wiltshire, with Ben and Mel.

In conversation with Rachel and Ben on BBC Breakfast, Victoria Howard discusses what The Queen’s appearance in a documentary about her coronation tells us.

Ben and Mel chatted to editor Victoria about Prince Harry and Meghan, whom the public seem to adore already, the stag-do which is being planned on Facebook for Harry and where they might be married.

Speaking to Mihi, Victoria explained that The Crown Chronicles website crashed because so many people wanted to read about the couple’s exciting news. Details of the ring, and the wedding. (7m 01s – Victoria speaks 3m 08s)

Our editor Victoria spoke about Prince Harry and Meghan Markle’s engagement, and what it meant for the Royal Family.

Speaking to Guyon Espiner, Victoria commented on the exciting news of a Prince or Princess for William and Kate, and how the Royal Family are reacting; listen below or here. (1m 38s)

Editor Victoria Howard spoke with Lucy and Rich on Heart FM’s afternoon show about the latest news that The Duke and Duchess of Cambridge are expecting. (2m 37s)

We spoke to Mashable about how Prince Charles’ sons have changed the way they represent the Royal Family, partly through social media. Read more.

The Crown Chronicles was used as a consultant, helping with factual accuracy in the production of this Maltese mini-series, which was written and presented by one of our then-writers, Marcella Busuttil.

“Victoria Howard, editor of The Crown Chronicles, exclusively told OK! Online: “This is a little unusual, but the Duchess also spent Christmas with her family at the beginning of her first pregnancy, when she was suffering with hyperemesis gravidarum…

“Since the Royals open gifts on Christmas Eve they will only be missing lunch and games in the evening.” Read more. 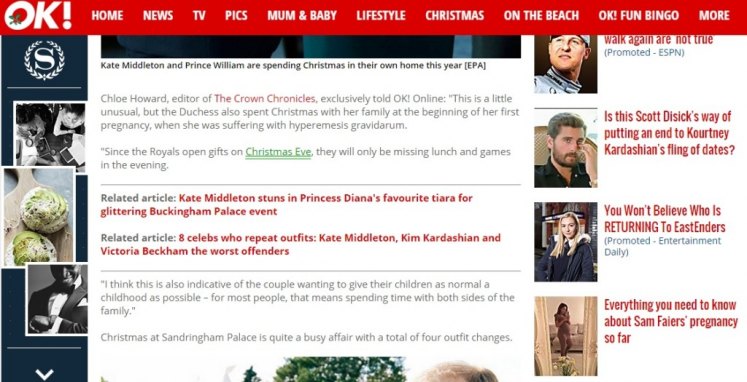 If you wish to speak to us for a TV or radio appearance, get a quote for an article, or even to use our royal expertise, please contact us at: editor@thecrownchronicles.co.uk

… The British Monarchy is the only one in Europe that still uses their Crown Jewels in coronation ceremonies.

Catherine is elegant in Emilia Wickstead for Commonwealth call