The bi-annual event, now in its second year, sees 15 entrepreneurs and inventors pitch their ideas to a room of other businessmen and women, hoping to win the vote at the end of the night as the product or service they like best. 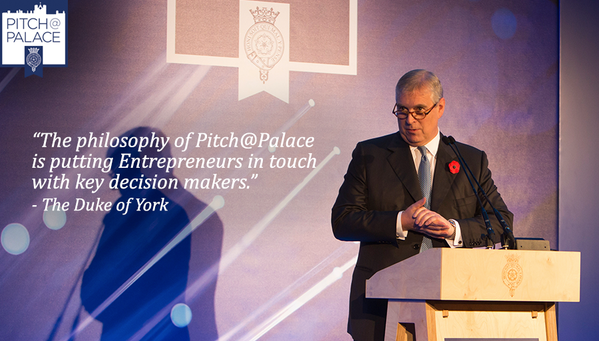 Prince Andrew addresses the audience at Pitch@Palace via @TheDukeofYork

Each presentation can only last three mintues – else the Royal Guard drowns you out with their trumpets, and the entrepreneur asks for an investment, a la Dragon’s Den, for introductions to connections in the business world, or even for some advice.

It was Unmade that won this instalment of the competition, with its 3D printer for knitted clothes. Custom and individual knitwear items can be made in-house in 90 minutes, at the company’s Somerset House.

This is what happens if you run out of time at #pitchatpalace – our thanks to @ScotsGuardsBand @WelshGuardsBand pic.twitter.com/Z1YDkLzNfv

Unmade won the vote, which is conducted on mobile phones, after Hal Watts, CEO, began his pitch wearing a pink woollen jumper under his suit.

“The jumper that I’m wearing today was made this morning in central London and it was made by fairly paid workers from mourinho wool, that was spun in Italy. I was involved in designing it and it only took 90 minutes to make,” he said.

Other pitches included Lifebox, a low-cost cardboard baby incubator for newborns in developing countries; Appear Here is a start-up that runs pop-up shops in unused retail spaces; while Toothscan, makes a device that can keep track of your dental health using a pulse of light.

Prince Andrew, who is keen to support entrepreneurs and business minds here in the UK, said to The Telegraph:

“We are seeing many, many more young people conducting entrepreneurial activity. Now that we are generating businesses that are successful, if we can reduce the risk in people’s minds…then that’s what I’m trying to achieve.”

The Duchess of York made an appearance, supporting her ex-husband, with whom she is still close.

The Pitch@Palace network has received £103 million of investment since the event was launched last year.