On the last day of Charles and Camilla’s visit to Cornwall, the Royal couple undertook a host of engagements yesterday, including a marine litter initiative and the local air ambulance service.

Newquay’s iconic Fistral Beach was their port of call, to see how local charities are tackling litter around Cornwall’s coastline on Ocean Plastics Awareness Day. The day was co-ordinated by Surfers Against Sewage, Clean Cornwall and the Marine Conservation Society, of which The Prince of Wales is President.

The Prince also had a go with a sand sifter, created by local product designer Euan Crowder, to separate the sand from rubbish. 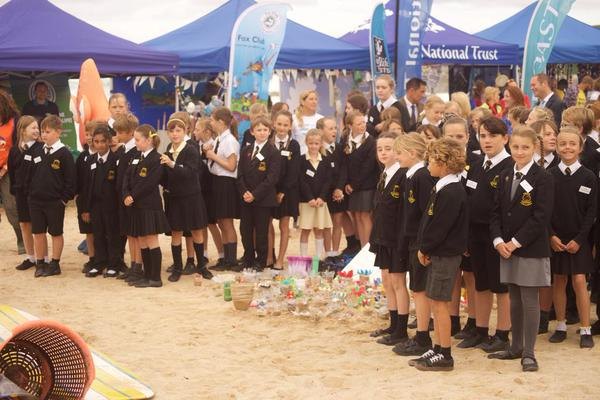 , said: “It was fantastic; we got lucky with the weather and lots of people turned out to meet His Royal Highness.

“He spent a long time at the beach with Her Royal Highness and they seemed really interested in our Plastics Awareness campaign. [Charles] spoke to us about his own mini beach cleans and said when he goes for a walk on the beach he always tries to pick up a bit of litter, which was nice to hear.”

The Duke then moved on to Rick Stein’s restaurant above the beach, while the Duchess stayed with the schoolchildren to learn more about their recent activities.

Prince Charles met with stakeholders involved in local, national and international initiatives, discussing plans to protect the marine environment, strengthen the circular ocean economy and close the loop on litter in Cornwall.

In a speech, the Duke said: “Almost half of all marine mammals now have plastic in their gut and I know I am not the only person haunted by the tragic images of seabirds, particularly albatrosses, that have been found dead, washed up on beaches after mistaking a piece of plastic for a meal.

“The fact that a recent study estimates that by 2025 there will be one tonne of plastic for every three tonnes of fish in the sea is not what I call encouraging.”

SERE training is offered to all members of the UK Armed Forces, from all three services (Army, Air Force and Navy), deploying on operations overseas; the course is designed to maximise their chances of survival if separated from their units, on land and at sea with survival skills.

Camilla was able to observe a demonstration of these skills.  Flight Lieutenant Jeff Spencer said: “The Duchess watched a demonstration on survival techniques, with an exercise where we were pretending to extract a British serviceman with a helicopter from a hostile territory.”

“The day was very successful and Camilla seemed to enjoy it. We always enjoy the Royal’s coming to visit us – it was very enjoyable.”

Paramedics at @cornwallairamb demonstrate how to use their new LUCAS chest compression equipment to HRH. #TRHCornwall pic.twitter.com/PTUQqmpOWC

The Duchess of Cornwall’s next stop was to see the new helicopter of Cornwall Air Ambulance.

Cornwall Air Ambulance was the first service of its kind in the UK and provides emergency care to the local area, undertaking around 700 rescues each year. Cornwall presents challenges with a scattered population, rugged landscape, and isolated rural and island communities, as well as secluded beaches and a slow road network; this means it can be difficult to reach patients by any other means.

Camilla became the service’s Patron in 2011.

Air crew and patients greeted the Duchess, where she cut the turf on the site of what will be the service’s new volunteer fundraising annex, concluding The Duke and Duchess of Cornwall’s visit to the county.

Happy Birthday Camilla! Our top 20 photos of The Duchess of Cornwall