On the final day of his trip to South Africa, Prince Harry visited Nelson Mandela’s widow, Graca Machel, and revealed he honoured the former President at the South Pole in 2013.

Harry met Graca at the Nelson Mandela Foundation Centre of Memory, and was given a tour of Mandela’s former offices in Johannesburg.

Prince Harry with Graca Machel, the widow of Nelson Mandela, at the Nelson Mandela Centre for Memory. Picture by i-Images / POOL.

The Prince described Mr Mandela as ‘one of those people you want to hug and never let go’ and revealed his personal tribute to the leader who attempted to fight apartheid.

HARRY FALLS OFF HIS HORSE AT POLO MATCH IN CAPE TOWN – TWICE!

Mandela’s widow received a picture of the moment Prince Harry left the flag at the South Pole from the red-head himself.  It was shortly after the leader’s death on 5th December, 2013, that Harry reached the South Pole – the first Royal to ever do so – as part of Walking With the Wounded’s South Pole Allied Challenge.

The Duke and Duchess of Cambridge were at the premiere of his film ‘Nelson Mandela: A Long Walk to Freedom’ that evening, and the news of his passing was broken to the audience after the screening.

A photo of his mother caught the Prince’s eye during the tour of the Nelson Mandela Foundation, which features a permanent museum about Madiba’s life: The Princess of Wales was a friend of Mandela’s, and visited him March 1997, five months before her death.

The image of Diana meeting Nelson was amongst a number of documents and artefacts from the leader’s life.

Verne Harris, director of The Nelson Mandela Foundation, said: “The Prince was drawn to the picture of his mother, he went straight to it when he walked through the door. He wanted to know when it was taken.”

In a speech at the foundation, the Prince praised the leader:

“I was fortunate enough to meet Madiba a number of years ago, and I have treasured that memory ever since.

“I am sure Madiba would be pleased to see such great work being carried in his name, giving inspiration to so many,” he continued.

“I can think of no better way of ending my visit to South Africa than by joining you this evening to remember Madiba as we approach the anniversary of his passing.

“I know he is missed by a generation, a nation and most keenly by his family. However, he will never be forgotten.”

The 31-year-old also visited Siyabonga Secondary School, before heading the Nelson Mandela’s former office. Here, he met with children participating in the Nelson Mandela Champion Within Program, showing the leader’s legacy living on.

He had already revealed he wanted to be a ‘bad boy’ to youths in a correctional facility on Tuesday, encouraging them to take the right path. At the school, Harry contnued this message, telling youngsters: “I would never want anyone to follow me in the bad things I do, only the good things.” 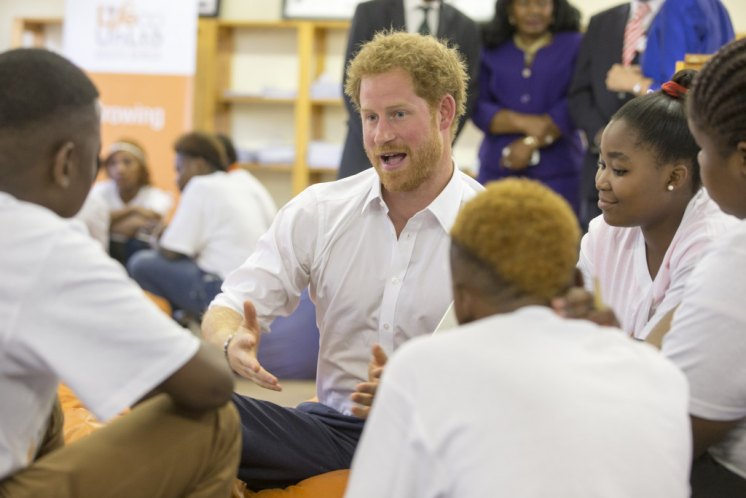 Prince Harry meets students at a school in Soweto near Johannesburg. Picture by i-Images/

Speaking to members of staff, the red-hed spoke of responsibility: “We have a certain responsibility to make sure that young people look at us and say that’s how I want to live, then hopefully everyone else will follow.

“Because you have to ask, if I had a young person following me, how would I want them to behave?”