The Duke of Cambridge paid a visit to Brighter Futures in Rhyl, north Wales, on Thursday, to hear how the organisation has been supporting the needs of the local community during the pandemic.

Brighter Futures was started in 2018 and sees eight local groups work together to support local children, young people, families and the older generations to participate in the community.

The organisation includes the Men’s Sheds project which has 70 outlets throughout Wales, where the organisation looks out for isolated and vulnerable men and get them to work on building projects together.

William met with Brian Penney, who is a coordinator for Men’s Sheds. He teased Brian for his tiny pink watering can while he showed him their allotment in Rhyl, joking: “It’s good to see you have got really nice watering cans. Nice pink colour.”

‘That’s a lovely mermaid,” he added, referring to the design with a laugh. “Very masculine for the Men’s Shed.”

“I always find something to embarrass people with!” 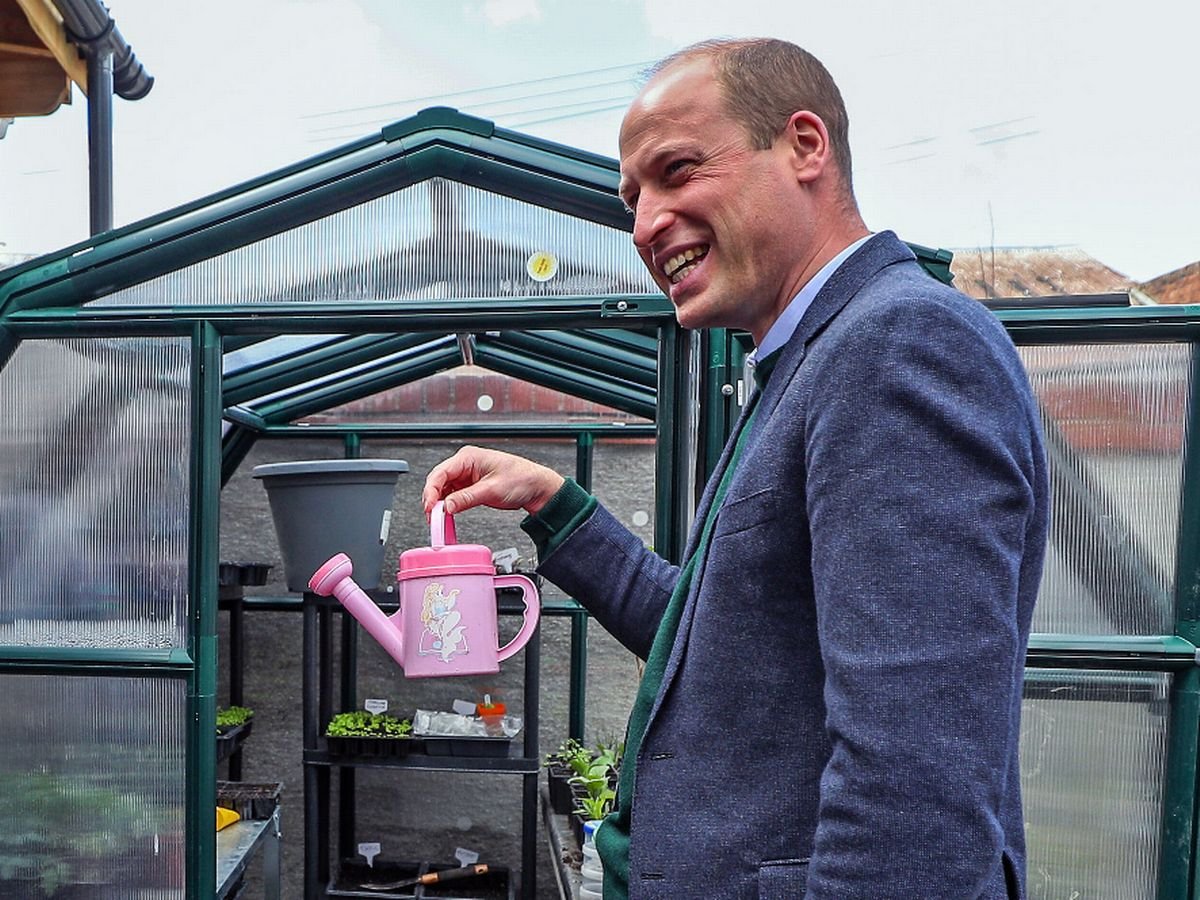 The pair chatted about gardening, with the Prince telling Brian: “My wife does all the gardening. I really like it but I have no idea what I’m doing.”

Brian said afterwards: “He told me Kate is getting him into gardening. She’s going to get him Monty Don’s book. He said she wants to get him into it because [Prince] Charles is into it, so it’s something for them to enjoy together.

Co-ordinator Stephen Johnson showed William a trebuchet competition between all the Men’s Sheds who each built the medieval weaponry.

William – perhaps thinking of his grandmother’s ancient residence at Windsor – laughed and replied: “Yours would breach a castle wall! I love it!”

He also commended the men on the importance of their work in the pandemic. The Duke of Cambridge told regional development officer, Simon Poole: “With the rural areas these are really important. That might be the only contact these men get. They are more needed now than ever before. Mental health issues are going to grow more and more, there’s already a big backlog.”

“What worries me is how do you find the guys we don’t know about? How do we get them out? The word community has really risen all over the country over this pandemic.”

William also met some of the youngest volunteers at the centre – Shayna Slattery, Ellie Wilkinson, and Tamsin Jones – who are part of Rhyl Youth Group. They help support other children in the area by getting them into sports and demonstrated their football skills, before kicking the ball over their wall by accident.

The Royal jokingly said: “Who’s going to go and get the ball? I hope you have got some nice neighbours.”

He was shown how they transformed the centre from a building site into a centre for the community to plant vegetables, craft materials and support isolated people.

During the pandemic Brighter Futures has helped deliver food, PPE, sports and IT equipment as well as craft materials and games to alleviate the effects of lockdown to those in need.

Prince William concluded the royal visit by planting an apple tree to commemorate the visit, musing: “Next time I come there will be 300 apples on it.”

The father of three was near Anglesey, where he lived with Catherine from 2010 to 2013, whilst he was an RAF helicopter pilot at RAF Valley. Speaking about the location of the organisation William commented: “I haven’t been back to Anglesey in a while. When I’m this close I feel I need to pop in and see how everyone is doing.”

Happy birthday Prince William! 11 facts about The Duke of Cambridge

As President of The FA, the Duke of Cambridge attended the England vs Czech Republic football match last night at Wembley Stadium for UEFA EURO 2020.⁠
#OTD in 2016, the UK voted to leave the EU after 43 years in a historic referendum by 52% to 48% in what became known as 'Brexit'. ⁠
Did you know in 1991 Prince William was hit on the forehead with a golf club by a fellow student? ⁠
#OTD in 1894, Edward VIII was born at White Lodge, Richmond Park.⁠
The Duchess of Cambridge visited the Natural History Museum to promote the museum's Urban Nature Project. ⁠
Just an appreciation post for the remarkable Countess of Wessex!⁠