The Queen opened a new session of Parliament today, joined by Prince Charles and Camilla. It was her first public duty since the death of Prince Philip, just over a month ago.

The scaled back event saw The Queen in day dress and a hat, instead of her robes and tiara or crown. The Imperial State Crown did make an appearance, though, as a symbol of her authority as Monarch, arriving in its own car and being carried on a pillow through the royal gallery into the Lords. 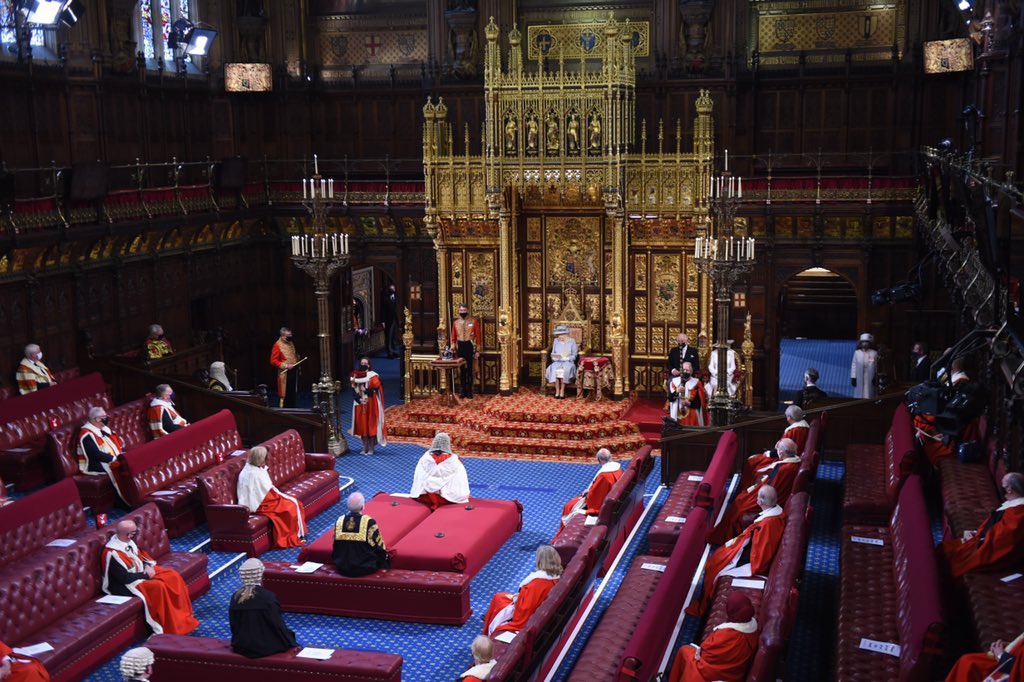 The 2021 state opening of Parliament was scaled back (@RoyalFamily)

The Queen at the State Opening of Parliament with The Prince of Wales and Duchess of Cornwall, with the Imperial State Crown on her right

Her Majesty wore her aquamarine clip brooches – a gift from her parents.

Prince Charles held his mother’s hand as they processed to the chamber, he wearing a mask. The Duchess of Cornwall walked behind them, wearing a cream and pink satin coat, with a rock crystal brooch that was once The Queen Mother’s.

The House of Lords had a slimmed down attendance, with spacing between peers on the distinct red leather benches, and masks were worn by all, save the Monarch, who was to read a speech.

All those in attendance were required to take a Covid test beforehand.

A small group of MPs from the House of Commons – including Prime Minister Boris Johnson and Leader of the Opposition, Sir Keir Starmer – were called from the lower chamber to hear the speech by Black Rod, and the door slammed in her face as she tried to enter, as per tradition.

Back in the House of Lords, Elizabeth II read her speech, often called The Queen’s Speech, which sets out the government’s plans and priorities for the next session of Parliament. Her Majesty has no say in the content of this speech; it is written by the government.

Tradition usually dictates the speech is handed to the Monarch, but 2021 saw her pick it up from the table beside her.

She was sat on a rich golden throne, bearing the royal heraldic symbols for Britain – but noticeably absent was the consort’s throne that has resided next to it for more than 60 years.

The Queen reads her speech from the throne in the House of Lords, setting out the government’s plans (@RoyalFamily)

The consort’s throne was deliberately lower and smaller than the Monarch’s to show the precedence of The Queen, but it was only introduced in the late 1950s; footage from 1958 shows the Duke of Edinburgh sitting to the side on a chair at the opening.

However, it was still in use even after Philip’s 2017 retirement, by Prince Charles.

It is reported that the retired throne is in the care of the Lord Great Chamberlain, the Marquess of Cholmondeley, for safekeeping and that it was decided the additional throne should not be retrieved, to prevent unnecessary travel.

The speech was opened as follows:

“My lords and members of the House of Commons.

“My Government’s priority is to deliver a national recovery from the pandemic that makes the United Kingdom stronger, healthier and more prosperous than before.

“To achieve this, my Government will level up opportunities across all parts of the United Kingdom, supporting jobs, businesses and economic growth and addressing the impact of the pandemic on public services.

The Prince of Wales holds HM The Queen’s hand after she gave her speech at The State Opening of Parliament today in her first public appearance since the funeral of The Duke of Edinburgh pic.twitter.com/7hSOeoJQWt

“My Government will protect the health of the nation, continuing the vaccination programme and providing additional funding to support the NHS. My Ministers will bring forward legislation to empower the NHS to innovate and embrace technology. Patients will receive more tailored and preventative care, closer to home. Measures will be brought forward to support the health and wellbeing of the nation, including to tackle obesity and improve mental health. Proposals on social care reform will be brought forward.

“My Government will build on the success of the vaccination programme to lead the world in life sciences, pioneering new treatments against diseases like cancer and securing jobs and investment across the country.”

PrevPrevious articleHappy 95th Birthday to The Queen! 16 facts about the longest-serving monarch
Next articleTell me about… the Imperial State CrownNext