Netflix’s upcoming royal drama ‘The Crown’ is claiming that Prince Philip was unhappy having to leave the Navy when Princess Elizabeth became Queen, and did not want to kneel before her at the Coronation in 1953.

One scene shows the royal couple rowing about the Coronation; Matt Smith as Prince Philip angrily requests his wife make an exception for him so he does not kneel before her during the ceremony. 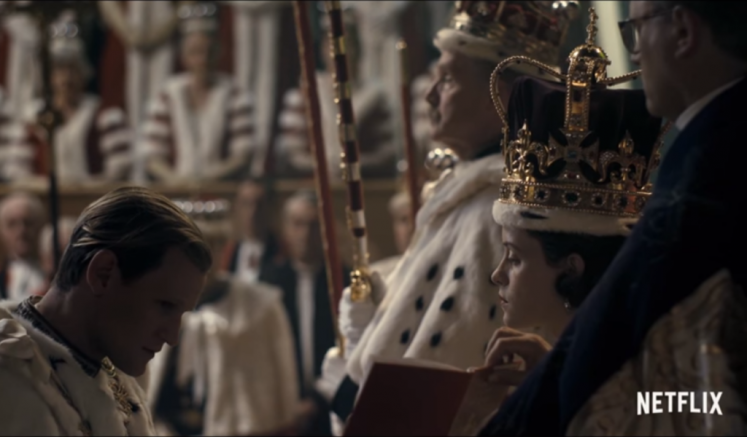 Prince Philip kneels before The Queen at the coronation – but the scene is fraught with tension. (Netflix)

Philip did kneel before The Queen during the 1953 ceremony (watch that specific part here) which he helped organise – but we cannot know his thoughts on this. However, it definitely seems to be a fictional dramatisation: Philip was already a member of the Greek Royal Family before he married Elizabeth in 1947, and therefore would have understood what was expected from him in this role.

The drama, reportedly costing Netflix £150 million to produce, is to recount the tale of Elizabeth II’s life from her early years, to her later reign. These will include her marriage to Philip, and the rest of her reign, and include the family scandals which rocked the Royals: Edward VIII’s marriage to Wallis Simpson and Princess Margaret’s relationship with Peter Townsend.

The series will consist of 10 one-hour episodes, with a cast of Claire Foy (Wolf Hall), Matt Smith (Doctor Who), and John Lithgow (Third Rock From the Sun), who will play Winston Churchill.

Constitutional expert Christopher Wilson said: “I doubt Prince Philip ever spoke those words to his wife, because he came from a royal house which had borrowed so much of its ritual and protocol from the British Royal Family. He knew full well what was expected of him in public, and was prepared to go along with it.

“On the other hand, there’s no question who wears the trousers in the relationship when they are behind closed doors. I doubt that even once, in all their nearly 70 years together, has he bowed to his wife in private.”

Biographer and royal history writer Philip Ziegler thought the irritation seen from Philip was likely true, but exaggerated: “It would be surprising if any strong-minded, enterprising man who wants to have his own career wouldn’t have been slightly irritated about having to walk two steps behind someone else. So I wouldn’t call the scene total fiction but I don’t think it should be blown up into the cause of a major crisis.”

But Hugo Vickers, royal biographer, asserts The Queen accommodated The Duke of Edinburgh’s requests for the Coronation, which he actually helped organise: “He didn’t want to be King and it is true that the Archbishop tried to minimise his participation, but The Queen went out of her way to include him in the service, for example at the Communion.”

Producers created the splendours of the Coronation using Ely Cathedral as a stand-in for Westminster Abbey, and the show is being hailed as the most lavish royal biopic yet. Mr Wilson said: “Nobody has ever tried to portray the Queen’s Coronation on film before, either in the cinema or on TV. That’s because it’s always been viewed in the past as a risky undertaking on account of the cost of staging it, of the sanctity of the occasion, and also because it’s such a complex ritual that would be so easy to get wrong.”

The show airs 4th November on Netflix. Watch the trailer below:

A wife and a mother. To a nation.#TheCrown. November 4th. pic.twitter.com/OaOVsHCgDW

The Royal standard is flown when the sovereign is present in that palace I thought? The crown did indeed pass instantly to Elizabeth, however she was in Kenya and not present at Buckinham Palace.

This comment in the article was based upon the trailer, when it was not clear of the context, i.e. where the Standard was – you can never be too sure with these drama shows! However, having seen the episode now, it was correct to be done as George VI was at Sandringham when he died and Elizabeth was not.

Netflix have wasted their money. Couldn’t they have focused on the achievements of the Royal family and the extraordinary life of the Queen who was never meant to be Queen.