Prince William has paid tribute to his grandmother, The Queen, for her  sense of humour, her dutiful nature and her reassuring presence in a foreword for a new biography.

“Elizabeth II: The Steadfast” penned by Lord Hurd, is a new biography on The Queen, and forms part of a series of short histories of Britain’s sovereigns, entitled Penguin Monarchs.

The Duke of Cambridge notes that, following World War One, the world is almost unrecognisable, but that Her Majesty gives her people ‘pride’ and ‘reassurance’ as a symbol of continuity, having been on the throne for 63 years:

“We find ourselves in a world that has changed dramatically, almost beyond recognition to the world that The Queen was born into, but where the role of charity, family, duty and compassion perseveres.

WIlliam has praised his grandmother in a foreword. Picture by Andrew Parsons / i-Images

“I think I speak for my generation when I say that the example and continuity provided by The Queen is not only very rare among leaders but a great source of pride and reassurance. Time and again, quietly and modestly, The Queen has shown us all that we can confidently embrace the future without compromising the things that are important.”

William, 32, has also praised his grandmother for her kindness and sense of humour, which many people who meet The Queen comment upon.

“From a personal point of view, I am privileged to witness the private side of The Queen, as a grandmother and great-grandmother. The Queen’s kindness and sense of humour, her innate sense of calm and perspective, and her love of family and home are all attributes I experience first-hand.”

The Duke will one day be King, and so has learnt duty from Her Majesty. The Countess of Wessex has said “if you cut her, the word ‘service’ would just run through her.”

“All of us who will inherit the legacy of my grandmother’s reign and generation need to do all we can to celebrate and learn from her story. Speaking for myself, I am privileged to have The Queen as a model for a life of service to the public.”

William goes on to add a note about The Duke of Edinburgh, his grandfather, who has been at Elizabeth’s side since 1947:

“I should add”, he writes, “that no mention of The Queen is complete without paying tribute to my grandfather Prince Philip, who has devoted his life to supporting her.” 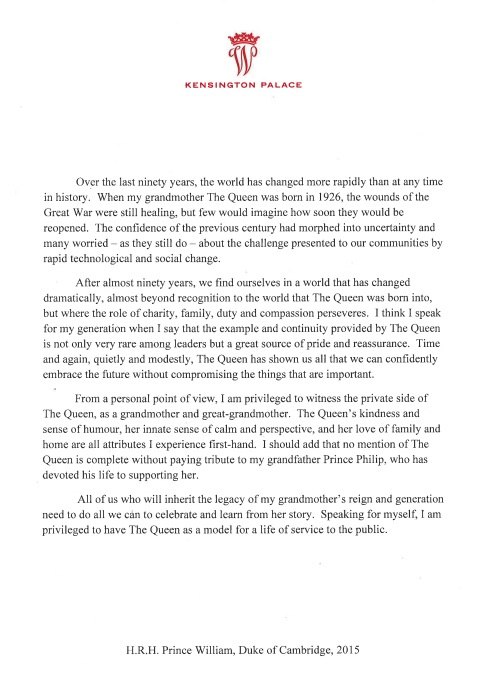 The foreword was released by Kensington Palace earlier today

A shining example to all young people of a life dedicated to Service.