Summer holiday with the Royal Family – Balmoral and Birkhall

As we wrap up July, so begins the summer holiday for the Royal Family: The Queen and Prince Philip head off to Balmoral, signalling the beginning of their 6 week-summer, and a rest from their official duties.

So why do the Royal Family retire to Scotland for their summer holiday each year? And what do they do with their time off? We take a look at the tradition and history to answer these questions. 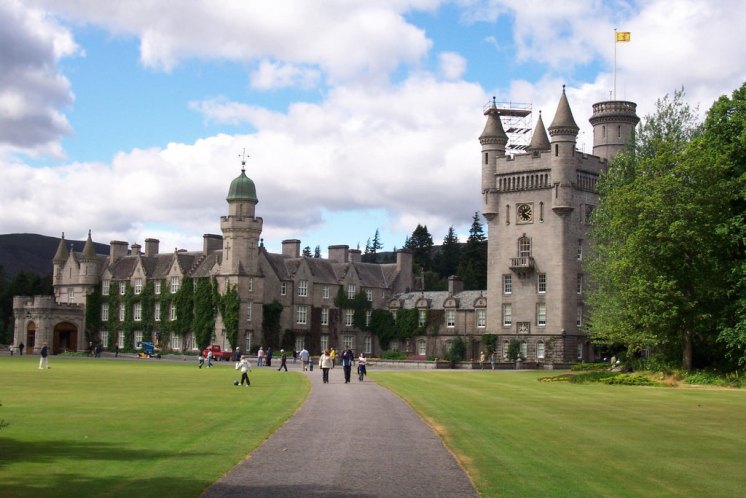 Balmoral Castle lies on the River Dee, which runs through the Balmoral Estate in Aberdeenshire; it is a private residence of The Queen, just like Sandringham, but unlike Buckingham Palace and Windsor Castle.

Prince Albert purchased the Balmoral Estate in 1852, he and his family having holidayed there, falling in love with the area. The original Balmoral Castle was a 15th century home, considered too small for Victoria and Albert’s already large brood of seven.

A new castle was built a short distance away from the old site, in something of a German style, thanks to Albert’s design; it was completed in 1856, and the older building demolished.

Victoria, who wrote that Balmoral was ‘charming, the rooms delightful, the furniture, [wall]papers – everything, perfection’, set traditions for the Scots and the English as she spent more time north of the border. Tartan, once banned as a symbol of the Jacobite rebellion, was all over their new home: tartan curtains, tartan carpets and tartan upholstery. It was Scottish to the excess, but adored by the Queen and Prince Consort.

For the English, the Highlands became a destination in the summer for hunting, with more Dukes to be found there in August than in Pall Mall, according to one writer. The aristocrats mimicked Victoria and Albert, who had made it something of a fashion to holiday in Scotland – not only for the noble families of the UK. 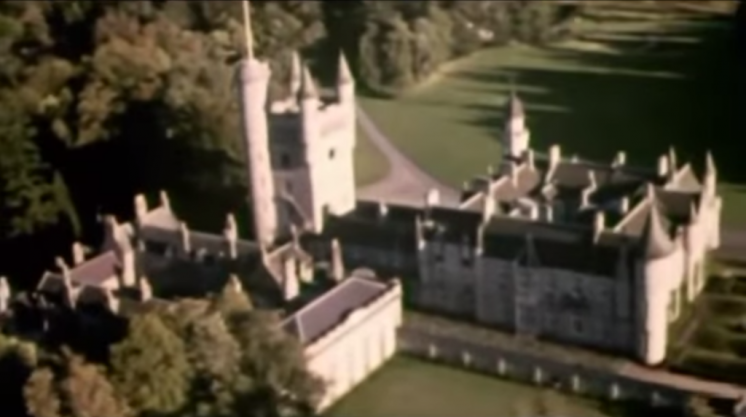 Victoria passed the estate onto Edward VII (he wasn’t much of a fan), who then passed it to George V upon his death, and so it went through the generations of Monarchs, each taking their family to Scotland each summer. The estate now belongs to Her Majesty, who uses the castle in August and September as her summer residence, continuing this tradition.

Not only does The Queen continue the legacy of Victoria at Balmoral, she thoroughly enjoys her time in the Highlands. The scenery is stunning, with privacy to be had, allowing for a change of pace to the London lifestyle. 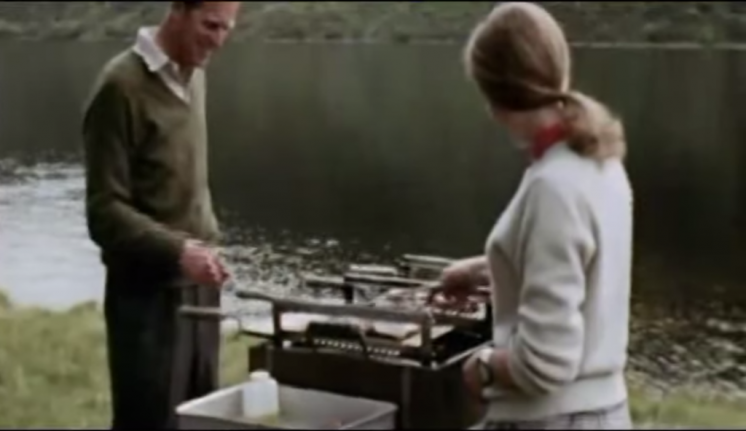 In Brian Hoey’s book, ‘At Home with The Queen’, the author describes how, in years gone by, the Royal Family would go hiking regularly, and have BBQ’s near the river, after a day’s fishing. He also comments how the Royals loved the outdoor life they could lead at Balmoral, as seen in these images. 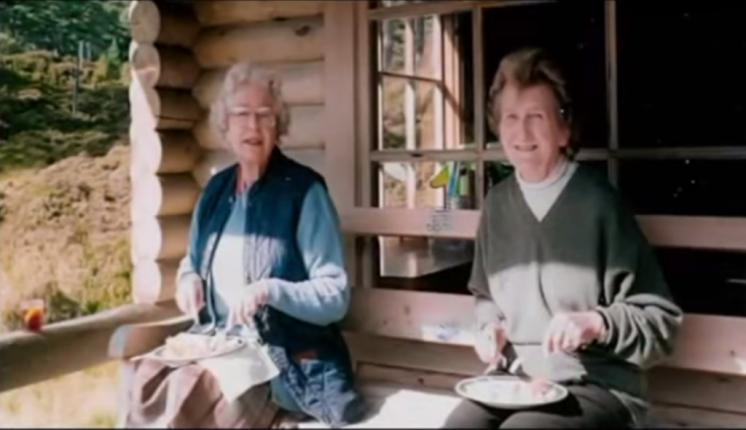 The Queen eats her lunch from a plate in her lap at Balmoral, with cousin Margaret Rhodes

A local church at Crathie ensures Her Majesty does not miss out on her daily services, and the relaxed atmosphere of the castle is a change from the more grand surroundings of Buckingham Palace and Windsor Castle. The Queen even does the washing up after the picnic or BBQ!

Little has changed at Balmoral for centuries – it remains largely decorated as Victoria and Albert decreed in the 19th century (minus some of the tartan), but The Duke of Edinburgh helped put a modern Elizabethan twist to the property, including in the gardens. The flower and vegetable garden were enlarged and a water garden created.

The Queen’s sitting room bears a great resemblance to images drawn during Victoria’s life: it remains in the style of a somewhat modernised hunting lodge.

Each year, the Prime Minister and his family are invited to Balmoral for a weekend; famously, Tony and Cherie Blair hated it, and it took a while for Margaret Thatcher to swap her heels for wellington boots.

Balmoral is a working estate, and The Queen and Prince Philip are actively involved in running it, just like at Sandringham. This is country work, allowing for a relaxing time in Scotland. The few months they spend here give them time to inspect things personally, and make and decisions needed after speaking with farmers and keepers. They are updated regularly even when in London, but it is always much easier when they are there.

Each year, the Braemar Games take place during the royal summer holiday, and are regularly attended by The Queen, Prince Philip, Prince Charles and Camilla; Her Majesty is patron of the traditional games, which includes caber tossing.

The Ghillies Ball is also a regular fixture in The Queen’s summer schedule: the traditional Scottish dance has taken place every year since the reign of Queen Victoria, as something of a thank you to staff. The Royals and servants don their finery (The Queen usually wears a tiara – so we are led to believe from old photos) and dance in the castle Ballroom. See photos here – it looks terrific fun!

Take a look in the photo albums and you are sure to see a great number of pictures taken at Balmoral, when the family can relax. A large part of the Royal Childhood exhibition at Buckingham Palace in 2014 featured home videos and pictures of young royal children playing with toys at Balmoral – including The Duke of Edinburgh riding a small peddle bike to chase Prince Charles!

And if you’re wondering why Her Majesty goes to Scotland for the summer – it is because Braemar, just a few miles away from the estate, is the coldest place in the UK! It can reach -27c in winter, and the castle is notorious for its chilly interior, something Victoria loved: the Russian Tsar once complained it was colder than Siberia! By spending the warmest part of the year there, the Royals ensure they miss this, as well as any complications poor weather and snow could bring (power cuts, road blocks etc).

Prince Charles and Camilla stay at Birkhall, a property on the Balmoral estate. It was formerly home to Queen Elizabeth, The Queen Mother, who grew up at Glamis Castle, some 50 miles away.

The couple, known as The Duke and Duchess of Rothesay when in Scotland, generally spend their time north of the border living the country life-style, with fishing, walking and hunting regularly forming part of their schedule.

The house was built in 1715 and bought by Queen Victoria in the late 1840s/early 1850s, for The Prince of Wales, though Edward preferred the grander surroundings of local Abergeldie Castle.

The Duke and Duchess of York (future George VI and Queen Elizabeth) spent summers with their two daughters at Birkhall, before moving into Balmoral for the first summer as King and Queen in 1937.

The Queen Mother spent her summers here, and Prince Charles moved in after her death in 2002, as happened with Clarence House.

He said of the gardens, which Bertie and Elizabeth began in the 1930s: “It is such a special place, particularly because it was made by my grandmother. It is a childhood garden, and all I’ve done, really, is enhance it a bit.”

Country Life magazine describes the building and gardens: “It’s not a large garden, and at its heart is the River Muick. Stand in front of the house – a neat, L-shaped, harlcoated building the colour of double cream – and the garden falls away in front of you, to be embraced by the surrounding woodland. The overwhelming feeling is of seclusion.

“The terrace at the top of the garden is something of a suntrap […] A thyme-studded path now leads from the drawing-room windows.

“Below the sloping lawn, the garden falls away rapidly, first to a terrace backed by a stone wall on which are[…]fruit trees, fronted by borders filled with red roses. On the grassy slope below this terrace, to either side of the central steps that lead down into the main part of the garden, are two sets of initials delineated in clipped box: ‘ER’ for Elizabeth Regina and ‘CP’ for Charles Princeps – an affectionate tribute to the previous incumbent from the present one.

See the CP in the first image on the grassy bank.

“Just a few yards from a towering lime tree (under whose branches in 1856 Florence Nightingale, a house guest, was greeted by an admiring Queen Victoria) is an enclosed lawn at whose end sits the heather-thatched Wendy house, built for Princesses Elizabeth and Margaret Rose and used by all subsequent royal children.”

It was from Birkhall that Charles and Camilla gave a photo opportunity to the press, announcing their intention to marry in February 2005. It was also the location of their honeymoon the same year.

The Duke and Duchess of Cambridge have spent time at Birkhall in the past, and will visit The Queen for a few days in the summer; they have, however, shown their preference for holidays abroad, especially Mustique, the favourite island of Princess Margaret. We do hope we will see them in Scotland more often over the summers to come, to carry on this royal tradition – especially as the couple also enjoy the country life, evident from their preference of Anmer Hall over Kensington Palace.

To us, it is clear why the Royal Family enjoy their Scottish retreats in the summer: they can be themselves, without the stress of their usual royal lives. While The Queen is never completely off duty (she still has her red boxes of papers to go through each day), rarely are engagements performed; when they are, they are events that they enjoy, such as the Braemar games.

The seclusion and privacy afforded to Royals in the Highlands mean they can go about their daily business – whether it be horse-riding, walking, hunting or fishing – without being photographed or followed, and feel a sense of normality as they BBQ the catch of the day, and relax in their tartan or tweed.

The Balmoral estate grounds, gardens and the Castle Ballroom are open to visitors from the beginning of April to the end of July each year; see here for more info.