Beginning his tour of Southern Africa in Lesotho, Prince Harry has paid tribute to his mother, Diana, Princess of Wales, and his former nanny, Olga Powell, naming rooms after them in a new centre for his charity Sentebale.

Prince Harry and Prince Seeiso of Lesotho at the opening of Mamohato Children’s Centre in Lesotho, on the first day of his tour. Picture by Stephen Lock / i-Images

The facility will help Sentebale addresses the emotional and psychological needs of children living with HIV, featuring acccommdation for up to 96, as well as medical facilities and classrooms. It will provide week-long camps for 1,500 HIV positive children each year, helping teach them the importance of taking their medication to manage their condition, to remove the stigma around their diagnosis and to help them come to terms with it.

The 31-year-old ginger Prince set up the charity with Prince Seeiso in 2006, and chose the name Sentebale meaning ‘forget me not’, as Harry was keen to carry on his mother’s legacy with HIV sufferers. Lesotho has the second highest rate of HIV/AIDS in the world.

The dining hall is named after Diana, while a welcome centre is dedicated “in loving memory” to his former nanny pic.twitter.com/sxtt8bj2uL

A wall in the Diana, Princess of Wales Hall bears the names of donors in the form of a tree; these names including friend of Diana’s, Sir Elton John and his husband David Furnish and their two young sons.

Prince Harry has been very hands on with the planning, designing the Olga Powell welcome centre – he helped with building work at the centre during a visit in 2014.

Earlier in the day, Harry met with King Letsie of Lesotho, who donated the land on which the centre is built, at the foot of Thaba Bosiu, which means “mountain at night”, recognised by legend as the birthplace of the country.

Prince Harry and Prince Seeiso of Lesotho form the Sentebale logo (a star-shaped flower) with children at the opening of Mamohato Children’s Centre. Picture by Stephen Lock / i-Images[/caption]

Harry gave a speech at the opening, talking of his shock at the situation in Lesotho before he set up Sentebale.

“Eleven years ago I made my first visit to Lesotho, with the help of Prince Seeiso. As we travelled the country I was amazed by its raw beauty; but I was also struck by the many children I met whose lives had been shattered by the loss of a parent and in some cases both.

“I couldn’t believe that so many children had been robbed of their childhoods by extreme poverty and the ravages of HIV and AIDS. Behind those smiles it was clear they desperately needed care, attention and above all, love,” Harry said. 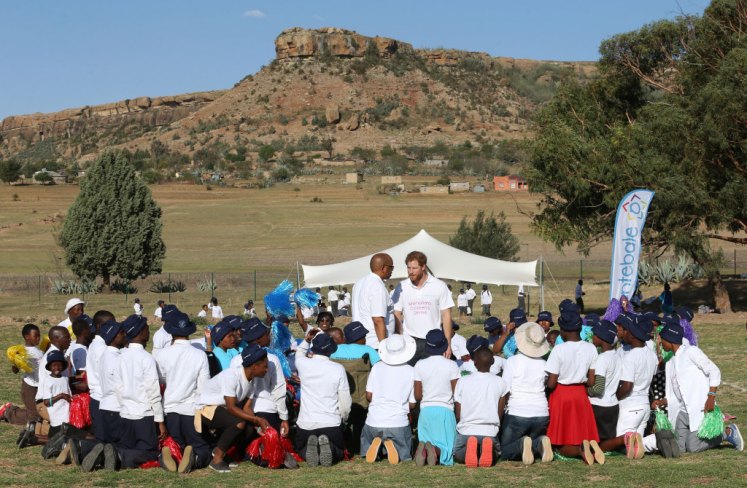 “There is no room for complacency; the scale of the challenge remains significant. Lesotho still has the second highest rate of HIV in the world and UNAIDS estimates that only 30% of adolescents believed to be living with HIV in this country are accessing medication.

“The Momahato Children’s Centre will enable us to reach many more of these children than has previously been possible. We will increase the number of those attending camps from 400 to 1500 per year – which represents 29% of our target adolescent group.

“Many countries face the challenge of HIV and AIDS, particularly across Southern Africa. In fact, according to the UN, HIV remains the number 1 cause of death amongst adolescents in Africa.”

after which he and Seeiso took part in a photography workshop. Using a polaroid camera, the Princes took photos of one another, which children at camp get to take home as a momento.

The meeting took place at King Letsie III’s palace in Maseru, and the two chatted, Harry saying “It’s really good to be back” and that he had been busy.

Typically British, the conversation turned to the weather, which the King complained had been too hot and dry, with temparatures at around 30c at the moment.

Harry also got to meet an old friend at the opening today: Mutsu Potsane. The two met in 2004, when Mutsu was just four, and Harry regularly receives letters. The fifth-in-line hugged his friend tightly after Mutsu approached him shyly. The pair last met in 2014, Harry’s most recent visit to the country, until now.

Taking the boy’s hat, Harry jokingly put in on Prince Seeiso, and the trio chatted for a while.

The Royal Family gather for The Duke of...

The Wessexes view tributes to Duke of Edinburgh...

Queen shares personal photo of her and Prince...