“I pray, Mr Adams, that the United States does not suffer unduly from its want of a Monarchy.”

– King George III to John Adams, on the occasion of Adams’ audience with the King on 1st June, 1785.

The American war for independence against Britain concluded with the 1783 Treaty of Paris, and this royal audience in June 1785 was a moment of great historical importance. It marked the first meeting between a British Sovereign and an official envoy of the newly-independent United States of America. As such, the audience was a highly anticipated meeting among the European ambassadors and British courtiers at St James Palace, the King’s principal residence and site of most official Court functions.

For Adams, a Federalist and former British subject who was among the more conservative of American statesman, the meeting was a highly emotional one. He recalled it vividly in a letter to his wife Abigail, who would have her own audience with the King’s consort, Queen Charlotte, only days later.

Royal protocol required all those entering the King’s presence to make three reverences (profound bows from the waist). These were to be done in a strict manner to display the person’s respect and honour toward the Monarch’s person: once, upon entering the room where the Sovereign was; then once more after advancing halfway across the room, facing the Sovereign; and then a final reverence immediately before the Throne, in front of the Sovereign.

At the conclusion of the audience, backing away from the Throne, the reverences were to be repeated so that the Monarch was never shown one’s back i.e a sign of disrespect. For Americans unused to such formality, especially those of low church Unitarian leanings like Adams, this process of bowing to an earthly King might have seemed a rather jarring one, but Adams managed quite well by all accounts.

Today, the protocol of ‘reverencing’ the Monarch is still observed by many Muslim Monarchies, such as in Saudi Arabia, while in Britain the protocol for meeting The Queen is much more relaxed than it used to be. When meeting The Queen, ladies are expected to curtsy, and gentlemen to bow their heads only once; Her Majesty even got rid of the rule of exiting the royal presence backwards, realising the discomfort and awkwardness it can give. 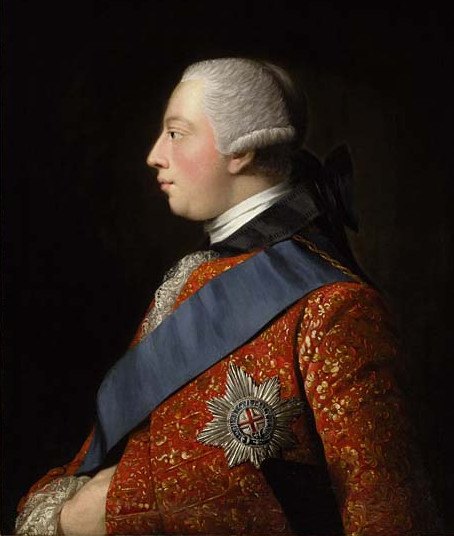 George III, the King who lost the American colonies. Library and Archives, Canada

HBO is to be commended for sticking almost perfectly to the verbatim exchange between The King and Adams; while The King’s reply was somewhat longer than that featured in the HBO excerpt, as was Adams’ initial address, there is nothing incorrect here; a few minor points were simply omitted from the scene for time’s sake.

After their initial audience, George and Adams became friendly, and Adams was invited to free use of the King’s personal library, which now fills one of the front halls of the British Museum. The royal library includes a large collection of American books, fossils and other artefacts. It is a pity that they didn’t form this friendship a decade earlier, in 1775, a pivotal year which saw King George declare before Parliament that the American colonies were in a state of rebellion. Had Adams and George been able to negotiate as well then as they did in 1785, perhaps the War for Independence could have been avoided, and the American colonists been permitted direct representation in Parliament, or Dominion status.

News of the King’s speech to Parliament removing the colonies from his royal protection sent shockwaves through New York, Boston, and Philadelphia. Most Americans were deeply traumatised to have been declared traitors to the King, as most saw themselves as petitioning him against Parliamentary abuse for a restoration of their legitimate rights as Englishmen. As a result of this psychological estrangement from the King, the American delegates would resolve at the Second Continental Congress to move toward declaring their independence from Great Britain. This culminated in the July 1776 issuing of the Declaration of Independence, written principally by Virginia aristocrat, Thomas Jefferson, who would later become Secretary of State under President Washington, Vice President under John Adams and the third President of the United States.

On July 4, 1776, John Adams, delegate to the Continental Congress from Massachusetts, voted to adopt the Declaration of Independence, proclaiming the British King unfit to be ruler of a free people. The King had proclaimed the rebellious colonists to be traitors. Could Adams possibly have imagined that, after eight years of warfare, he would stand before that same King, as a respected diplomat on the world stage, presenting his credentials as the first United States Minister Plenipotentiary to Britain?

On June 1, 1785, King George formally received John Adams, representative of the fledgling nation that had dealt the British Empire a bitter defeat. The meeting, as Adams recounted in this official account, was marked by the pomp and ceremony required by the occasion of a Royal audience. But beneath the pageantry, Adams described a strong undercurrent of emotion as The King and his former subject—who once reviled each other as bitter enemies—met face to face, as statesmen.

In his address to both Houses of Parliament on 27th October 1775, George III famously declared the American colonies to be in a state of treason and rebellion against him. Less than a year later, in July 1776, John Adams was one of the delegates to the Second Continental Congress who affixed his signature to the Declaration of Independence denouncing the same King as a tyrant.

The Beehive, official blog of the Massachusetts Historical Society — which retains principal access to the Adams Family papers — notes here that

On June 1, 1785, John Adams entered the Court of St. James for a private audience with King George III. He made three bows and presented himself as the first minister of the newly independent United States. After a moving exchange of formalities, The King mentioned the rumour that Adams was not particularly fond of France. Adams found the perfect reply that neither praised nor insulted France or England. “I must avow to Your Majesty, I have no attachments but to my own country,” to which The King replied “An honest Man will never have any other.” After the encounter, Adams confidently reported to Congress, that he had been treated precisely as all other foreign ministers were.

Ten years later John Quincy Adams, sent by Congress on a special errand from The Hague, was led through the same procedures of etiquette for his audience. He recorded his experience in his diary. When asked by George if it was his father who was currently governor of Massachusetts (i.e. Samuel Adams), Adams, no doubt with a bit of pride, replied, “No Sir, he is Vice-President of the United States.”

What did John Adams’ ‘Dearest Friend’ and loyal, clever wife Abigail Adams have to say about her husband’s first audience with The King, and her own presentation at Court to George III’s consort, Queen Charlotte?

Here is a letter from Abigail to her sister Mary Smith Cranch in 1785:

“The Tory venom has begun to spit itself forth in the publick papers as I expected, bursting with envy that an American Minister should be received here with the same marks of attention politeness and civility which is shewn [shown] to the Ministers of any other power. When a minister delivers his credentials to The King, it is always in his private closet attended only by the minister for Foreign Affairs, which is called a private audience, and the Minister presented makes some little address to His Majesty, and the same ceremony to The Queen, whose replie was in these Words, “Sir I thank you for your civility to me and my family, and I am glad to see you in this country,” then very politely inquired whether he had got a house yet? The answer of His Majesty was much longer, but I am not at liberty to say more respecting it; than that it was civil and polite, and that His Majesty said he was glad the choice of his country had fallen upon him.”

“Fryday morning
Congratulate me my dear sister it is over. I was too much fatigued to write a line last evening. At two a clock we went to the circle which is in the drawing room of The Queen[…]

We were placed in a circle round the drawing room which was very full, I believe 200 person present. Only think of the task the Royal family have, to go round to every person, and find small talk enough to speak to all of them. Tho they very prudently speak in a whisper, so that only the person who stands next you can hear what is said[…]

The King is a personable man, but my dear sister he has a certain countenance which you and I have often remarked, a red face and white eye brows, The Queen has a similar countanance and the numerous Royal Family confirm the observation. Persons are not placed according to their rank in the drawing room, but tranciently, and when The King comes in he takes persons as they stand. When he came to me, Lord Onslow said, Mrs. Adams, upon which I drew of my right hand glove, and His Majesty saluted my left cheek, then asked me if I had taken a walk to day. I could have told his Majesty that I had been all the morning prepareing to wait upon him, but I replied, no Sire. Why dont you love walking says he? I answerd that I was rather indolent in that respect. He then bow’d and past on.

It was more than two hours after this before it came to my turn to be presented to The Queen. The circle was so large that the company were four hours standing. The Queen was evidently embarrased when I was presented to her. I had dissagreeable feelings too. She however said Mrs. Adams have you got into your house, pray how do you like the situation of it? Whilst the Princess Royal looked compasionate, and asked me if I was not much fatigued, and observed that it was a very full drawing room.

They [Charlotte, Princess Royal and Princess Augusta, two daugters of George and Charlotte] and are pretty rather than beautifull, well shaped with fair complexions and a tincture of The King’s countanance. The two sisters look much alike. They were both drest in lilack and silver silk with a silver netting upon the coat, and their heads full of diamond pins. The Queen was in purple and silver. She is not well shaped or handsome. As [to] the Ladies of the Court, rank and title may compensate for want of personal charms, but they are in general very plain ill shaped and ugly, but dont you tell any body that I say so.”

You may read the full essay here at Ryan Hunter’s blog.