An institution over 1,000 years old, the British Monarchy has a few odd rules and traditions. The weirdest? It has to be that The Queen doesn’t legally need a driving license! 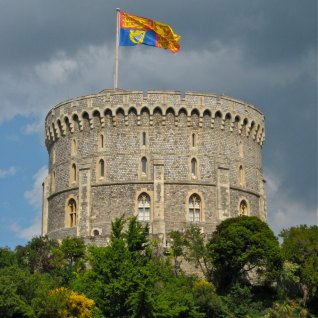 … because the Monarch never dies! As soon as one Sovereign passes away, the next immediately assumes the position.

The only way for the standard to be lowered, is if the body of the previous Monarch is housed there (to lie in-state for example), though this does not apply to Buckingham Palace, being the home of the Monarchy. Also, if the new Monarch is at the same location, perhaps visiting the body, the Royal Standard is at full mast.

They imported Holy Water for christenings

Royal children are special. Naturally. And so the standard church Holy Water in church is not quite good enough for a Royal Baptism: water is brought to the UK from the River Jordan, where Jesus was baptised by John the Baptist. The river, therefore, holds an important role in Christianity.

Prince Charles and Prince William were both christened in the Music Room at Buckingham Palace, using imported water.

The Monarch loves a party – so has two birthdays.

The Monarch holds the unique position of being able to celebrate their birthday twice a year. And it’s not because they love to party!

Edward VII decided November was too cold for Trooping the Colour, so chose a summer date instead. MOD

Trooping the Colour has celebrated the Sovereign’s birthday since 1748, but it was Edward VII who decided he should be able to have two birthdays. Edward was born in November, meaning it was almost guaranteed to be a miserable and cold day for Trooping, so he set the date for June instead, to ensure better weather. Now, the second Saturday of June is always Trooping the Colour.

When High Sheriffs are appointed by The Queen, she does not sit at her desk with a pen and paper, but with parchment and a pin!

Pricking the parchment is a tradition began under Elizabeth I: it is thought Elizabeth was asked to select High Sheriffs while she embroidered, and she only had a bodkin to hand.

It takes place in February or March of each year, to select the ceremonial officers for UK counties. During a meeting of the Privy Council, The Queen uses the very same silver bodkin as her ancestor, Queen Elizabeth I, to select or ‘prick’ her choice for the role.

Each year on 18th June, The Duke of Wellington must pay his rent to The Queen for his house, Stratfield Saye in Hampshire.

Stratfield Saye, The Duke of Wellington’s home, for which he must pay rent each year. Rich Tee

Following the Battle of Waterloo, The Duke of Wellington received the house as a gift from the people, and since 1819, he has attended ‘The Waterloo Ceremony’ at Windsor Castle to pay his rent. During the ceremony, held on the anniversary of the English victory at Waterloo, the Duke gives Her Majesty a new French flag, with the year in the corner – this is his rent!

The flag is then taken to the Guard Chamber at Windsor Castle, and hung over a bust of The 1st Duke of Wellington.

The Queen is a Duke…?

The Queen goes by a variety of names across the UK and the Commonwealth. As Monarch and therefore proprietor of the Duchy of Lancaster, Her Majesty is referred to as ‘The Duke’ when in the county town, and the same in the Channel Islands, where she is The Duke of Normandy.

This came about because Queen Victoria considered Duke to be higher ranking title than Duchess (since a woman becomes a Duchess only when her husband is a Duke); therefore she decreed that all Queens would also be The Duke of Lancaster and Normandy, not Duchess.

Swans are caught during the swan upping to create a swan census. Bll Tyne.

The Queen owns all unmarked mute swans in the open waters of the UK. All of them. However, she only lays claim to those on certain stretches of the River Thames and its surrounding tributaries.

Swans have been royal birds since 1186, and during the third week of July, when cygnets are old enough to be handled by humans (roughly one month old), swan upping takes place.

The aim of swan upping nowadays is to create a swan census. The birds are captured, marked and then released and the ceremony is presided over by the Swan Marker. The Queen attended for the first time ever in 2009, and this is thought to be the first occasion in centuries the Monarch has witnessed the ceremony, which is carried out in their name.

Well, that’s not technically true. Her Majesty can drive – she is regularly spotted in her Land Rover at Windsor – but she doesn’t hold a driving licence, because by law she doesn’t need one!

Sovereigns also need not wear a seatbelt (even on public roads), and they don’t need to use a number plate on their vehicle.

But did you know these birds can be sacked if they do not fulfil their duties, or are a nuisance around the Tower? Raven George was dismissed a few years ago for eating television aerials!

A Ravenmaster is even specially employed to look after the birds, who reside next to Wakefield Tower and eat 170g of blood and bird biscuit each day.

Charles III? or Albert I? Prince Charles could be either of these when he ascends the throne, as a King or Queen does not have to reign using their first name. Any of their given names – royal men usually have four, women three –  are allowed.

Queen Victoria, was in fact, named Alexandrina; George VI was Albert, and his brother was regularly known as David to the family, but reigned as King Edward VIII (full name Edward Albert Christian George Andrew Patrick David – they broke the rules a little with him!).

What do you think of these unusual royal traditions and rules? Did you know them all?

Thank You
It Is Very Nice To Know!?

In the northern shires of Scotland the Sutherlander’s, MacKay’s, Ross’, Munro’s, Gunn’s, Campbell’s, and Grant’s, were clans in history that could be counted on to support the Throne of England. Traditionally the Clan Munro hold their land from the Crown on the condition that they should furnish a snowball at mid summer for the King (or Queen) if required. This they could easily do as Ben Wyvis, a corrie on Munro land, holds snow all year round. It is said that in 1746 when the Duke of Cumberland advanced north the Munro’s actually sent him some snow to cool his wines. On May 24th weekend (Queen Victoria’s birthday) in Canada my mother’s Munro’s faithfully recognise that tradition by bringing a carefully saved snowball from the freezer and placing it on the table as we toast the Queen (with 10 year old Teaninnich, of course!)

Who will be King