Latest posts
Kate in camo – Duchess of Cambridge marks Armed Forces Day
Prince George raises money for animal conservation charity with a cake sale
Prince William and Kate unveil Windrush Monument at Waterloo
Canterbury Cross for The Queen marking 70 years’ service to the Church of England
How Prince William has evolved from reserved young Royal to confident future King
Prince William at 40: the importance of tackling homelessness
Camilla in Vogue: royal life is ‘not easy’, spoiling her grandchildren & her love of Wordle
Duchess of Cambridge hosts her first political roundtable on early years research
Prince William visits the Lionesses ahead of the UEFA Women’s Euro 2022
Charles and Camilla lead Royals on first day of Royal Ascot 2022

For many, Whitehall is simply the name of an area in central London, but prior to 1698, Whitehall Palace was a huge 1500-room Tudor complex, which spanned from Trafalgar Square right up to the Houses of Parliament by 1670. It was the principal residence of Monarchs until its destruction following a fire, who then transferred to the nearby St James’s Palace on the Mall.

Banqueting House – now the only part of Whitehall left, was the Palace’s crowning glory, completed in 1622 by Inigo Jones. Much effort went into saving the neoclassical building during the fire of 1698 (under William III’s watch), because of its grandeur and modernity. The house now melts into the street unnoticed, sat amongst the other white-stuccoed governmental buildings, which drew on the Jones’ design for inspiration.

A depiction of Whitehall Palace by Hendrik Danckerts. Banqueting House sits one in from the left. (Wikimedia Commons)

The adventurous new exhibition begins at Banqueting House, in the under croft; here, visitors pick up their headset and ‘portal’ – a wooden device which takes on many forms and uses throughout the 90 minute tour – to begin crossing the centuries and discovering the stories of Whitehall Palace’s timeline and its residents.

This portal, or tool, is used to check in at various locations via an object, and then listen in to conversations and exchanges from historical figures, including Samuel Pepys, and household staff. These objects – described as ‘interventions’ by their creators – vary from a model of Whitehall itself, to gates and totems, all on the streets of Whitehall and inside Banqueting House itself. They blend seamlessly into the landscape, meaning you’re part of a secret club, exploring as tourists and Londoners walk by.

Historic Royal Palaces describes it as ‘binaural 3D sound and haptic technology guid[ing] visitors on a digital adventure to discover a hidden history’. 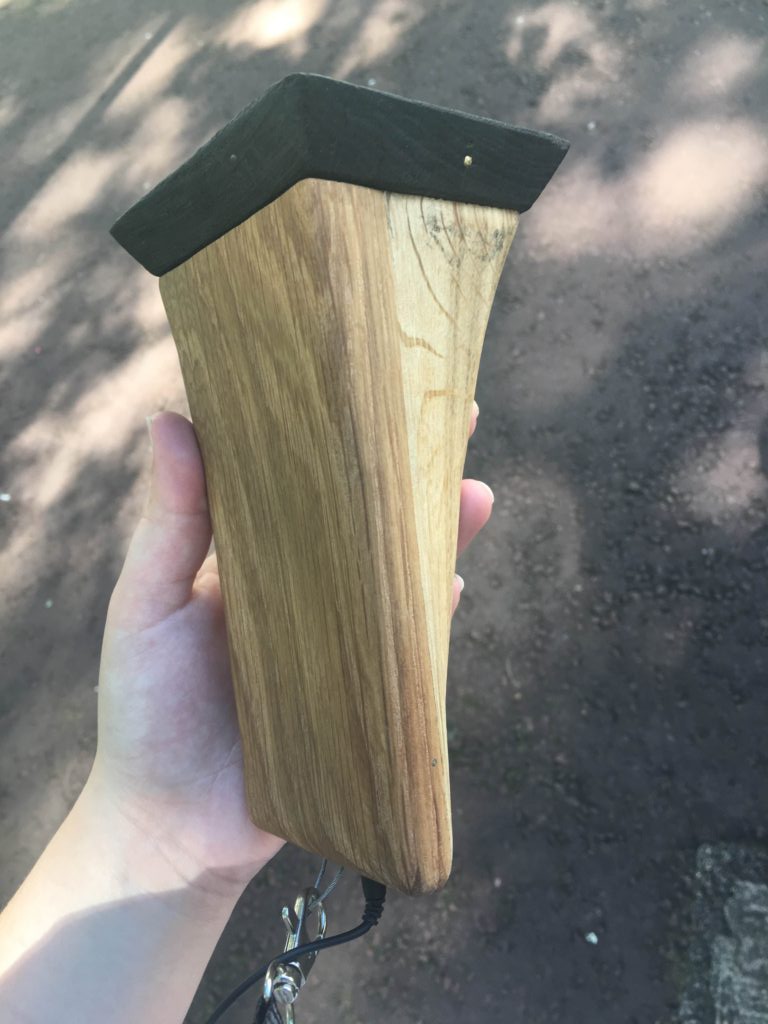 Your tool, as used at The Lost Palace experience (Victoria Howard) 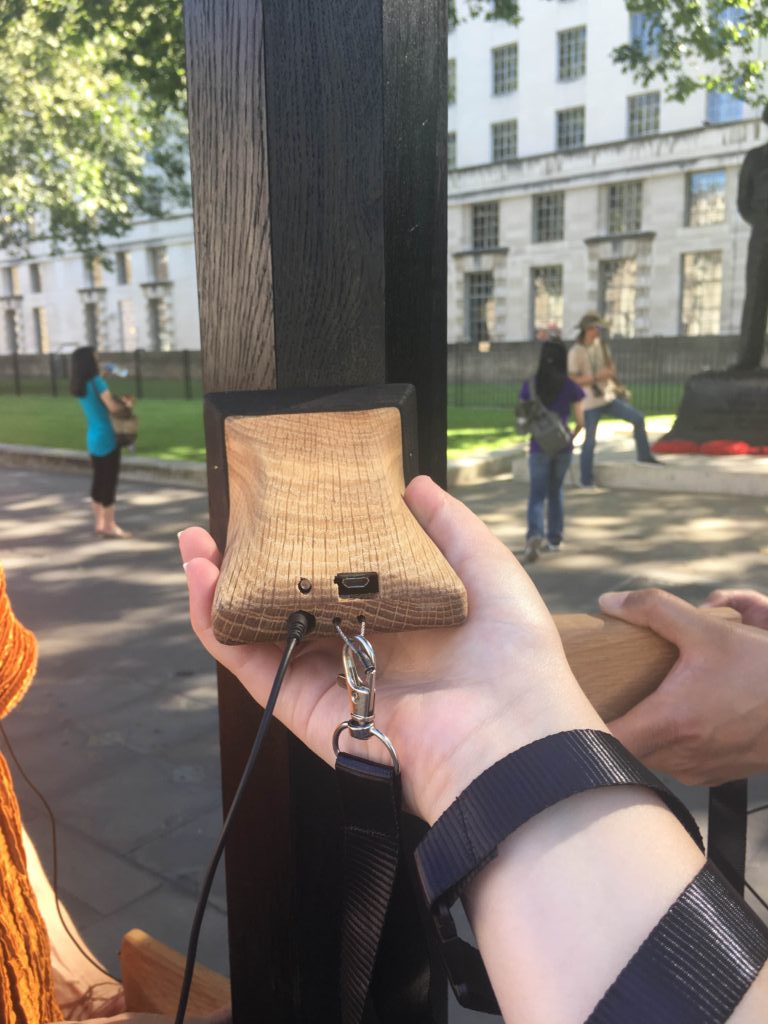 Holding the tool to a portal triggers the story (Victoria Howard)

You are directed around each stop by a guide on your headset, who explains how to use your tool and in which direction to be looking, ensuring a smooth journey. These interactive sessions include taking part in a joust at Horseguards Parade; listening in on Guy Fawkes’ interrogation in 1605 (in what is now the MoD); a performance of King Lear (starring you); Henry VIII’s secret wedding service to Anne Boleyn at Holbein gate; and hearing Charles I’s address to the crowds before his execution.

Charles I’s bust sits above the entrance to Banqueting House, where he was executed in 1649 (David Holt)

A children’s version is available, as is a late-night adult version, where the language is more suggestive, and the stories more sordid. We imagine there is plenty to hear from the Caroline Court of Charles II!

For those interested in how this experience was put together, Near Field Communications (NFC) are utilised in the interventions, while an android phone sits within the wooden, multi-function tool. Explained simply, the tool tracks where exactly the user is to give the relevant story at the right time, and sensors located throughout the interventions trigger reactions in the tool-embedded phone to tell a tale.

The clever recording of these exchanges and events means you feel truly submersed in the past, something which often gets lost in some historic sites. The only inkling of your reality – that is, standing on the 21st century streets of London – is your guide, Sharon, who instructs you to step forward across the centuries, and the cars and busses on the road. 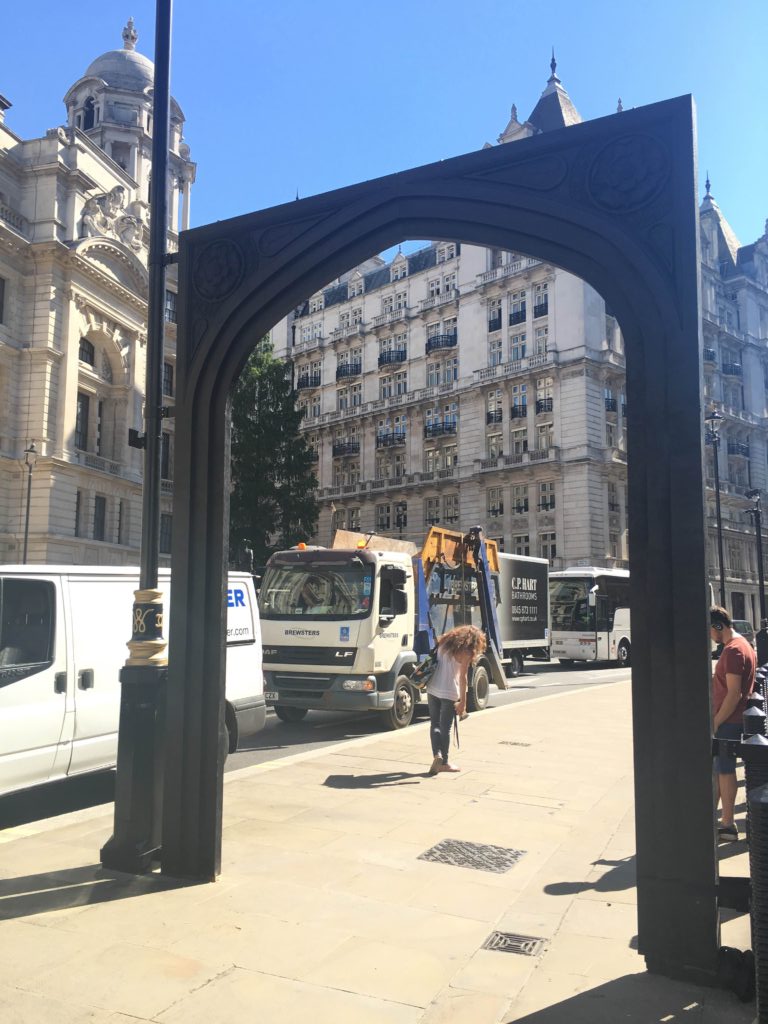 One intervention (a stop on the way) is this gate, which transports you back to James I’s court and Shakespeare’s King Lear (Victoria Howard)

Two years of research went into creating this project, which gives visitors a new take on the sprawling Tudor Palace, once the principal Royal residence in London, and HRP worked with theatre team Uninvited Guests, designers Chomko & Rosier, and software developers Calvium Ltd.

The grand finale takes place inside Banqueting House’s main hall, with its famous Rubens ceiling, created by Charles I to honour his father, James I and the Union of the Crowns, which the Scottish King embodied.

Historic Royal Palace’s Digital Producer, Tim Powell, said of the new feature: “The history that happened in Whitehall Palace is extraordinary, but very few people know that these nation-changing events happened here. With The Lost Palace, we want to…make them an active participant in it [the Palace’s history]. 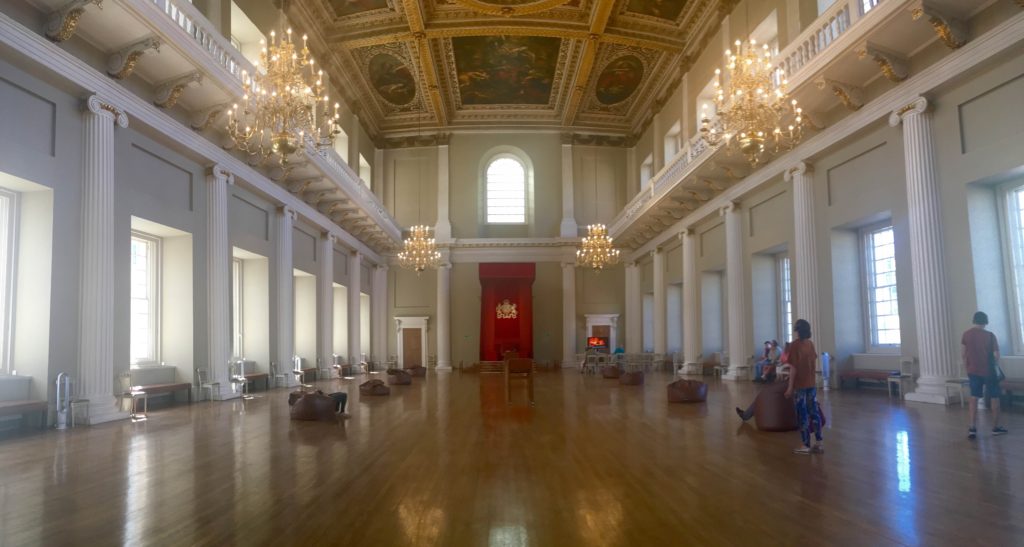 Inside Banqueting House, with its famous ceiling by Rubens, depicting the Union of the Crowns under James I. It is here you finish your interactive experience (Victoria Howard)

“It is innovative in its approach to collaborating with create partners and shows a huge leap in the use of digital technologies within a heritage movement.”

‘The Lost Palace’ interactive exhibit runs at Banqueting House from 21st July – 4th September, with special late adult-only sessions on Wednesday, Thursday, Friday. Tickets are £12 for adults and £7 for children, 7+. Book over at www.hrp.org.uk/thelostpalace

More on other Stately Homes...

Lord of the Manor… Luton Hoo – a royal family favourite

Fire-ravaged Clandon Park to be rebuilt by National Trust