The American Heiresses who saved the British Aristocracy: Conseulo Vanderbilt, Duchess of Marlborough

Consuelo Vanderbilt, Duchess of Marlborough, was one of the American ‘Dollar Princess’ of the 19th century, whose family money was brought into the UK through her dowry. She married into the prestigious Marlborough family, who would produce Winston Churchill and Diana, Princess of Wales. This is her story…

As the 19th century ended, the great aristocratic families of the UK began to struggle. A number disappeared, ruined by their expensive lifestyles, and the depression in agriculture – an estate’s lifeblood – while others clung on for dear life.

Societal opinion was shifting, with the working classes questioning the hierarchy that had been in place for centuries – people felt little sympathy for these families.

For some, their worlds crumbled around them and they hoped for a miracle. For others, a few hundred families, in fact, that miracle came in the form of an American heiress, also known as ‘Dollar Princesses’. 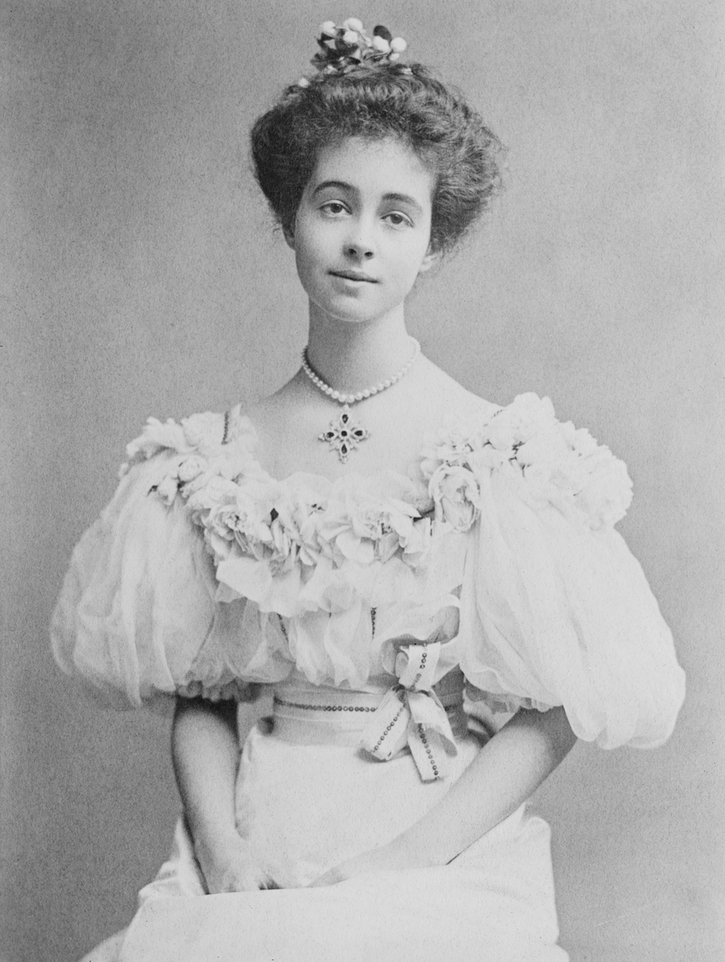 By 1895, when nine Dollar Princesses became Ladies, Countesses and Duchesses, the system had developed into mothers and daughters visiting London for the duration of the social season (April to August). This was often preceded by a trip to Paris to purchase gowns, sometimes spending more than $400,000 in today’s money in one season to not be seen in the same dress twice. They would call upon friends and relatives with connections to the aristocracy, be it from a new Anglo-American pairing or otherwise, to introduce them to eligible bachelors.

By the 1930s, some 350 US heiresses had married into the British aristocracy; it’s estimated that they brought (in today’s money) £1 billion with them. Here are some of their stories…

Born in New York City on 2nd March 1877, Consuelo Vanderbilt was the only daughter and eldest child of William Kissam Vanderbilt and Alva Erskine Smith. Vanderbilt made his money in the railroads, while Alva was a budding suffragist.

Alva was determined her daughter would find a good match like her namesake godmother, Consuelo Yznaga who married George Montagu, Viscount Mandeville. The couple’s daughter was taught at home by governesses – traditional for the upper classes – including languages, music and other disciplines a lady might need as a European hostess.

This control and want of a ‘good’ husband was taken to such extremes that Consuelo was whipped by her mother for even slight misdemeanours, and she was forced to wear a steel rod against her spine and shoulders to improve her posture. When questioning Alva on her choice of clothing as a teen, she told her daughter that “I do the thinking, you do as you are told.”

Known for her beauty, and her intelligence – by the age of 18, Consuelo had passed entrance exams for both Oxford and Cambridge – this training and regime seemed only to aid her, as Alva reportedly had at least five proposals for her daughter following her European debut in 1894, aged 17.

Consuelo was described as having a “piquante oval face perched upon a long slender neck…enormous dark eyes fringed with curling lashes”. One writer said he and his friends were enamoured by “her dimples, and her tiny teeth when she smiled.” Consuelo was quite a catch, future dowry notwithstanding.

Her parents only let the future-Duchess of Marlborough consider one of two matches they felt appropriate: to wed Prince Francis Joseph of Battenberg (unsurprisingly, a distant relation of Queen Victoria’s) whom she met in 1894. Consuelo instantly took a dislike to him and refused.

Secretly, the young lady rebelled and became engaged to Winthrop Rutherfurd, a fellow American. Alva was furious and attempted to dissuade her daughter from eloping. She begged before locking her daughter in her room and threatening to have Rutherfurd killed; finally, Mrs Vanderbilt contracted a ‘mysterious illness’ – some suggest she faked a heart attack –  convincing Consuelo that her health was being affected by her daughter’s stubbornness.

Eventually, the 18-year-old gave in to her family’s insistence, and was engaged to Charles Spencer-Churchill, the 9th Duke of Marlborough. Consuelo’s mother made a remarkable recovery from her condition upon the engagement announcement.

The couple met after Alva engineered a meeting through Mary Stevens, Lady Paget, something of an Anglo-American matchmaker of the day. Alva had her eye set on him for Consuelo when she met Lord and Lady Lansdowne, Charles’ aunt and uncle, in 1893. Charles had inherited the nearly-bankrupt dukedom the year before.

Alva leaked the news of their engagement to the press, and continued to feed information to the papers about everything from Consuelo’s gown, to the gold fastenings on her undergarments, in order to build public excitement in the lead up to the wedding.

In a ceremony on 6th November 1895 in her home town, Consuelo wed the most eligible bachelor in Britain. Only hoping to please her mother, on the morning of the wedding, the bride wrote of her unhappiness:

“I spent the morning of my wedding day in tears and alone; no one came near me. A footman had been posted at the door of my apartment and not even my governess was admitted. Like an automaton I donned the lovely lingerie with its real lace and the white silk stockings and shoes…. I felt cold and numb as I went down to meet my father and the bridesmaids who were waiting for me.”

Consuelo and Charles, Duke and Duchess of Marlborough with their family. (Wikimedia Commons)

Despite the crowds cheering the couple on the big day, Consuelo wept at the altar, her veil attempting to conceal the spectacle from her groom and guests, but the papers were informed.

Charles, who was known as Sunny (not due to a pleasant disposition, rather his secondary title, Earl of Sunderland) reportedly also gave up his love for money: the Vanderbilt dowry was in the region of $2.5 million worth of railroad stocks, approximately £52 million today. Quite handy, as the Blenheim estate was close to bankruptcy, and he had plans for renovations.

The couple were given a further annual income each of $100,000 for life by William Vanderbilt, who also built a mansion for his daughter as something of a wedding gift: Sunderland House in Curzon Street, Mayfair, (see image here) just around the corner from The Dorchester hotel.

The new Duchess of Marlborough’s marriage began badly: she was told by Sunny on their honeymoon that he only agreed to marry her to keep Blenheim Palace going with her fortune, and that he would never return to America, as he ‘despised anything that was not British’. Their temperaments were also ill-suited. He had an unhappy childhood, but was devoted to the duty that he had inherited, while Consuelo found him to be cold, snobbish, and image-obsessed.

When she moved to the Palace in Oxfordshire, Consuelo bemoaned the lack of central heating and hot water that she had enjoyed in her US home.”From my window I overlooked a pond in which a former butler had drowned himself. As one gloomy day succeeded another, I began to feel a deep sympathy for him,” she wrote in her memoirs.

She was regularly questioned, if not interrogated, by her mother-in-law as to whether she was ‘in the family way’ yet.

Another problem came in the form of Consuelo’s lack of knowledge about aristocratic life, which she arguably should have been taught before her marriage to a Duke. In her autobiography, Consuelo recalls asking the butler to light the fire in the drawing room. With a horrified look on his face, he sent for the footman. “He was deeply shocked that I would ask him to perform so menial a task,” she explained.

— LORD OF THE MANOR – HIGHCLERE CASTLE —

Despite two children – John and Ivor, born in 1897 and 1898 respectively – Consuelo and Sunny’s relationship soon deteriorated. He once more became a womaniser, and the Duchess looked elsewhere for comfort. At one point, this came in the form of Reginald Fellowes, Charles’ cousin. Meanwhile, Sunny became infatuated with another American, Gladys Marie Deacon, comparable to Consuelo, save her financial situation.

During the marriage, The Duchess of Marlborough began her philanthropic efforts: she was adored by the poor and less fortunate tenants on her husband’s estate, and took particular interest in the issues relating to mothers and children.

During the inter-war period, Consuelo and Winaretta Singer-Polignac, heiress to the Singer fortune, founded a hospital for middle class workers in a suburb of Paris, now the Foch Hospital. Even today, it is a private not-for-profit institution serving the community.

Consuelo was also something of a hit with the other aristocrats and Royalty; she and her friends – including Jennie Jerome, Lady Randolph Churchill – were the inspiration for Edith Wharton’s novel The Buccaneers. The book centres on five wealthy and ambitious American girls, their guardians and the impoverished English aristocrats who marry them during the season.

The cracks in the marriage were soon too deep, and the Marlboroughs separated in 1906. They would eventually divorce in 1921, and have the union annulled by the Vatican in 1926.

In order to help facilitate this – and then allow Charles to covert to the Catholic church – Alva Vanderbilt testified that the marriage was coerced: “I forced my daughter to marry the Duke. I have always had absolute power over my daughter.” Perhaps because of her hand in ending the unhappy union, Consuelo and her mother enjoyed a better relationship later on in her life.

Despite the divorce, the Duchess maintained ties with some of the Spencer-Churchill family, particularly her cousin, Winston Churchill.

It was Consuelo’s second marriage that would prove to be happier: she married Lt. Jacques Balsan, a French balloonist and pilot who worked with the Wright Brothers, in July 1921, shortly after her divorce was finalised. The Vanderbilt-turned-Marlborough woman became a Balsan.

The pair lived near Palm Beach, Florida and it is thought that Churchill polished his famous ‘Iron Curtain’ speech in the house named after her mother: ‘Casa Alva’. Seemingly a good match, Consuelo was even comfortable enough to publish her memoirs in 1953, entitled The Glitter and the Gold. With the help of a ghost writer, the book was described as ‘an ideal epitaph of the age of elegance’. In 1942, she was featured in Vogue with a photoshoot at her home, such was the fascination with her even in her 60s.

Jacques died in 1956, following a long and content relationship with Consuelo. She died in 1964 and asked to be buried alongside her younger son, Ivor, at St Martin’s Church, near Blenheim Palace.

What a lovely portrait of a lovely lady. Thank you!