The Crystal Sceptre given by Henry V to the City of London, after the victory at the Battle of Agincourt, is to go on display at the Guildhall Art Gallery, London.

It has only been seen by a few handfuls of people, as the sceptre lives in the City’s Guildhall – and only leaves its home for coronations, and to swear in a new Lord Mayor, making it a special exhibition.

Henry V, victor at Agincourt, wanted to thank the capital for its support in the war. London contributed 10,000 marks – worth £3 million pounds in today’s money – and he gave his funders the Crown Jewels as a guarantee. The celebrations in the city were enthusiastic and befitting such a victory, and so the King had the sceptre commissioned.

The sceptre is also on display for Freeman of the City ceremonies, which take place at Guildhall (Victoria Howard)

Agincourt is considered one of the great military victories in English history: around 8,000 archers and men-at-arms took down a French side up to 5 x larger that itself in 1415.

Just a few hundred English soldiers were lost, compared to some 8,000 French. Since this date, Monarchs have been known as ‘King/Queen of England and France’.

It is thought to have been given in February 1421, making the jewelled rod almost 600-years-old. The earliest mention of the sceptre is in a painting of the coronation of Catherine of Valois, Henry V’s wife, in Westminster Abbey: the Lord Mayor of London is shown holding the sceptre by his side.

Experts say, rather ironically, the 17-inch carved rock-crystal stem was likely made in Paris, inlaid with gold. Gems were imported from across the globe: red spinels came from modern Afghanistan, sapphires from Sri Lanka, and pearls from the seas of the Arabian gulf were then traded in Cairo.

The story of the Crystal Sceptre was only uncovered when Dr Michael Hall, an art historian, began researching the art of Mansion House (the residence of the Lord Mayor) with Dr Clare Taylor, and Lady Gifford (wife of the former Lord Mayor, Sir Roger Gifford).

Dr Hall said: “As an object it is remarkable in many ways. It was given in recognition of London’s assistance to the King at one of the turning points in English history and the fact that it has survived intact all these years is truly amazing.”

The sceptre was nearly sold off down during Oliver Cromwell’s Interregnum, like the Crown Jewels were, though it appears the authorities hid it. In the Great Fire of London, 1666, the Lord Mayor, Sir Thomas Bloodworth, prized his possessions over keeping his city safe: he sent his things, including the Crystal Sceptre, out of the inferno. 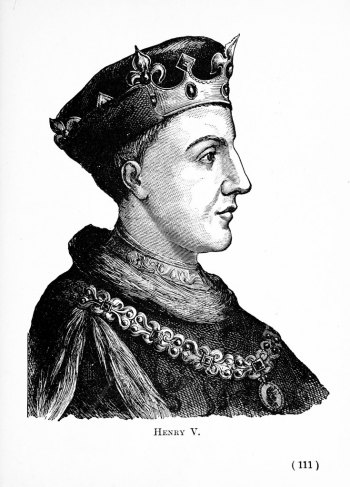 Henry V gave the sceptre as a gift to London

The exhibition, entitled ‘Unveiling the crystal Sceptre: Henry v’s Gift to the City’, will begin on 24th October the day before St Crispin’s Day, when, almost six centuries ago, 9,000 English soldiers engaged as many as 36,000 French at Agincourt.

Also on display will be a silver gilded iron mace used in the battle, presented by Henry V to the village of Hedon, on the Humber.

Katty Pearce, curator at the Guildhall Gallery, said: “This is a unique opportunity to get a close look at something with such a rich heritage that has rarely been seen before.”

She added: “Because of the 600th anniversary of the battle there is a heightened awareness of the importance of Agincourt at the moment, and the story of Henry V is part of our national consciousness. This is a beautiful object that connects us to that national story.”

Entrance to the exhibition is free, and it runs until 3rd December.

Deborah James receives her Damehood from Prince William at home