The lost Princes in the Tower is a mystery that historians have not been able to solve for centuries.  Now, Phillipa Langley of the Richard III Society, who launched the search for King Richard’s body in 2012, is seeking to clear Richard’s name and find out what really happened to the youngsters.

Ms Langley spearheaded the 2012 project to search for Richard’s body, which was presumed to be in the Leicester river Soar, being thrown in after being killed at the Battle of Bosworth in 1485.

The discovery of the King in the car park is one of the most significant historical finds for decades, and gave answers to a number questions about the former Duke of Gloucester. 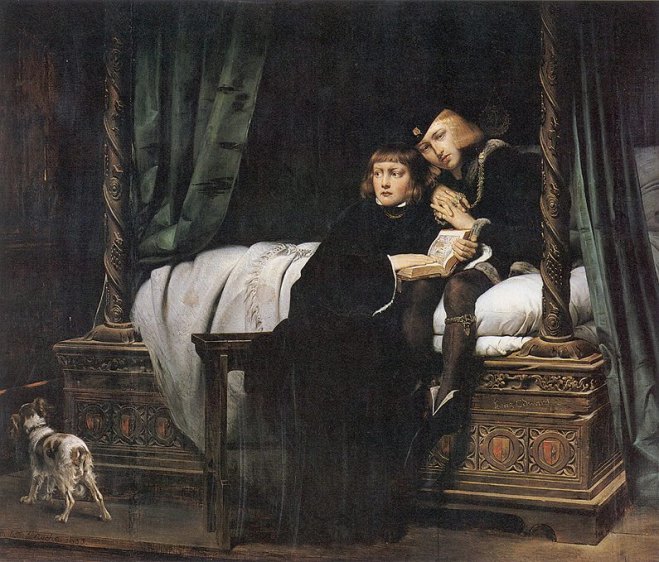 “This is the last big question around Richard III,” she told The Independent on Sunday. “We need to look at what happened to the Princes in the Tower because most of the Establishment always state that Richard was the murderer, yet there is absolutely no evidence to support that. Nothing.

“Nobody has put this to the top of their agenda before, but we’re going to now. It was the same with the search for Richard’s remains – everyone presumed they were in the river Soar. Nobody was particularly interested in searching for his lost grave.”

Two children’s skeletons were found in the Tower

Two children’s bodies were found in the Tower of London in 1674 during work on the Tower, and were officially recognised as those of 12-year-old Edward V, eldest son of Edward IV, and nine-year-old Richard of Shrewsbury, Duke of York. Young Edward ascended the throne immediately after his father’s death, and was taken to the Tower for his Coronation; the day never came. The two skeletons were found in a wooden box and were placed in an urn, which was interred in Westminster Abbey.

Richard III has always been the prime suspect, thought to want to take the throne from his nephew, instead of acting as regent for the minor.

“They [historians] believed it because it fitted with the archetypal villain, the archetypal Tudor history and Shakespearean history. Because we questioned that and proved it was indeed a complete myth that I think this question of what happened to the princes really needs looking into now.”

The bones were found 10ft under the staircase leading to the chapel of the White Tower. “That depth is Saxon/Roman level and a skeleton of another child found a few decades ago in that area was carbon-dated to the Stone Age,” Langley said.

A request by the Richard III Society to remove the urn from Westminster Abbey to allow for dating and other tests were rejected by The Queen, supported by the Church of England; the Abbey is a Royal Peculiar, meaning the Monarch has authority over it, and not the Bishop of the Diocese.

“I have three key lines of investigation – two that have never been investigated before. There are a couple of European lines of inquiry that are looking very interesting. We do know that Henry Tudor [Henry VII] tried to destroy all copies of Richard’s legal right to the throne, the Titulus Regius. What we don’t know is how much of the other paperwork he destroyed quietly behind the scenes. So, we’re hoping that further [destruction] might not have taken place on the Continent. There might be more information available over there.”

Langley has gathered a team of specialists, including detectives and researchers, from across Europe to assist her in solving the Princes in the Tower mystery. Private archives with files dating to the Plantagenet and Tudor periods have been offered to the search team, and she has called on the Vatican for help, too.

“This is a pure research project and it’s exciting in that we can go into it with a focus on this particular mystery. When you keep the paper historians out of it and ask those whose job it is to look into cold case histories, like the police, lawyers and private investigators they all say the same thing: that’s it’s very questionable whether there was a murder at all, considering what happened with all the pretenders that arrived under Henry Tudor’s reign; and second, that Richard III is not their prime suspect – because they go on motive, opportunity and proclivity.

“I’ll be using cold case history specialists because this project needs to go in places it has never gone before.”

So who killed the Princes in the Tower?

The suspects have been listed as :

What are your thoughts?

Princes in the TowerRichard III

St. George’s Chapel: a timeless venue for a...

The only 2 Louis in British history: uncrowned...

The White Ship, William Adelin and the England...