Remembering Marie Antoinette: the martyred Queen of the French Revolution

Marie Antoinette of France and Navarre was guillotined by the radical French Republic on 16th October 1793. But she was wrongly maligned, as a committed mother, friend, child of God – and Queen.

Born on 2nd November 1755 to Queen Maria Theresa of Hungary and Croatia, and Prince Franz Stefan, Duke of Lorraine, Princess Maria Antonia’s childhood was warm and happy. She was brought up in an informal family circle in the royal palace of Schoenbrunn in Vienna, centred around their devout Catholic faith.

Marie Antoinette – the maligned Queen of France and victim of the French Revolution. Portrait by Elisabeth Louise Vigée Le Brun

At the age of 15, in 1770, Maria Antonia married Dauphin Louis-Auguste of France, favourite grandson and heir of the ailing King Louis XV, and became Dauphine (Crown Princess) of France.

Upon her husband’s accession to the throne on 10th May 1774, just 18-years-old, Marie Antoinette became Queen of France and Navarre, and her husband Louis XVI.

Denied any real political influence, and bereft of any real consolation or support in her marriage, the young Queen turned her attentions to fashion. She arranged elaborate parties and banquets, card games, and enjoyed gardening. She established a friendship through letters with Queen Charlotte of Great Britain, consort to King George III.

The royal couple were widely ridiculed by the French public for their failure to produce an heir; Marie Antoinette’s brother, the Emperor of Austria, Joseph II, even weighed in on their marital problems, as did their mother, Empress Maria Theresa; she gave her daughter rather forward advice on how best to begin a sexual life with Louis. Finally, reportedly after a small surgical correction (possibly circumcision), The King and Queen began to enjoy a normal married life.

After eight years of marriage, in 1778, The Queen at last gave birth to a child, Princess Marie-Thérèse Charlotte, the first of her four children. 1781 saw a son and heir, the Dauphin Louis Joseph, born to the couple, but he sadly died aged eight. In 1785 Marei-Antoinette gave birth to another son, who would survive Louis XVI by several years, Louis Charles, future Louis XVII.

Within the Kingdom of France, a growing number of the population eventually came to dislike The Queen, accusing ‘the Austrian woman’ (a nickname given Marie Antoinette upon her arrival in France by her sisters-in-law), of being profligate, promiscuous, and of harbouring sympathies for France’s enemies, particularly Austria. The Diamond Necklace affair (where The Queen was accused of helping defraud the crown jewellers of a very expensive diamond necklace) further damaged her reputation. 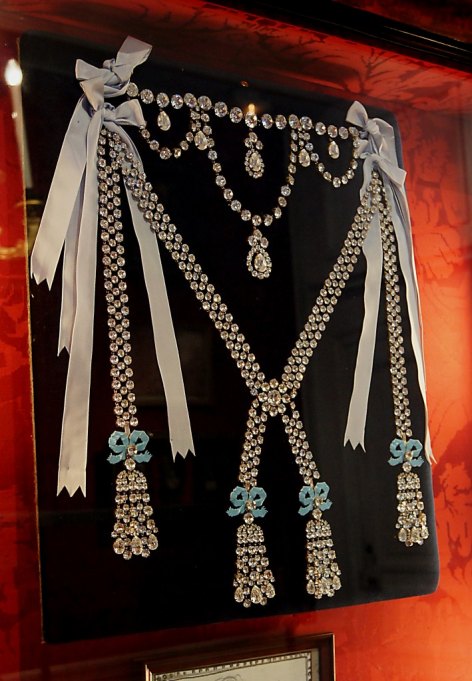 ‘Collier reine Breteuil’ – the lavish necklace Marie Antoinette was supposed to have acquired by defrauding the jeweller. Jebulon/ Public Domain

Marie-Antoinette later became known as ‘Madame Déficit’ because France’s financial crisis was blamed on her lavish spending, and her perceived opposition to the social and financial reforms of the more liberal-minded ministers. To counter anti-monarchical sentiment – which focused particularly on The Queen’s alleged (but false) extramarital affairs and financial irresponsibility – portraitists released several paintings of The Queen with her children, showing her as a faithful wife and devoted mother: simple, yet stately and bourgeois.

Dislike rapidly turned into rebellion, and in 1789, the Bastille prison was stormed outside of Paris: the French Revolution had begun.

A mob of angry Parisian women (and armed men) stormed the Palace of Versailles in October 1789, attempting to kill The Queen, slaughtering the Royal Swiss Guards. The revolutionary government then placed the Royal Family under house arrest in Tuileries Palace, Paris.

Several events linked to Marie Antoinette (in particular the Royal Family’s bungled June 1791 attempt to flee to Varennes, and her perceived support for Austria against the revolutionary government) had disastrous effects on popular opinion. Over a year later, on 10th August 1792, the attack on the Tuileries forced the Bourbon Royal Family to take refuge at the National Assembly.

On 13th August 1792, the family was imprisoned — ostensibly for their own safety from the mob calling for their heads — in the Temple prison. On 21st September 1792, Louis XVI was formally deposed as King and the Monarchy declared abolished.

Around this time, Marie Antoinette said to one of her close friends, Madame Campan: “If the factions assassinate me … it will be a fortunate event for me; they will deliver me from a most painful existence… I am his wife; I will not suffer him to incur the smallest risk without my sharing it.” 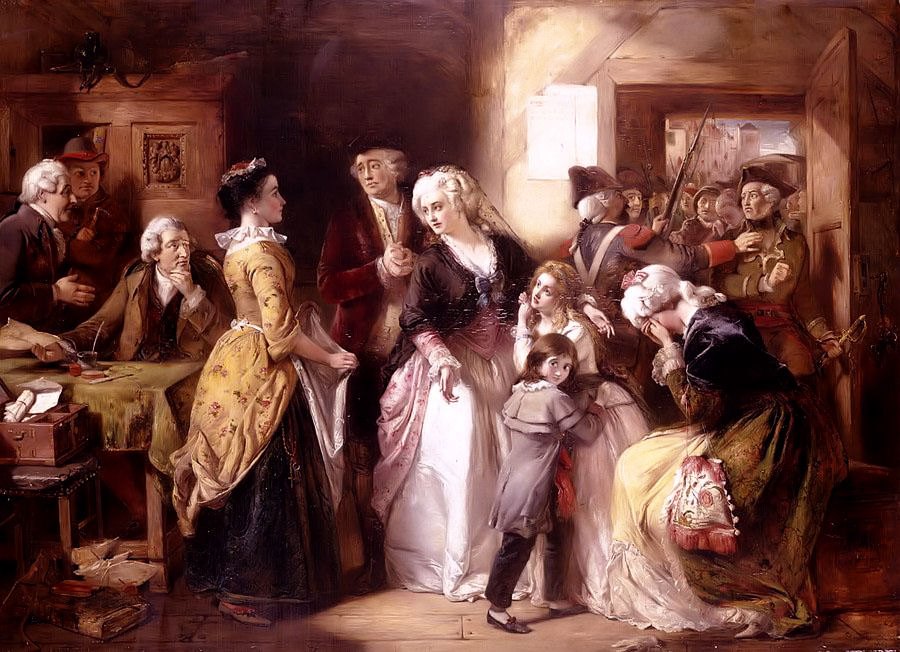 The increasingly radical revolutionaries wondered what to do with the man they considered an ‘ex-King’: should he be sent into exile, perhaps to America? Should he be kept a prisoner for life? Should he be killed? What about a trial? Leading Jacobin anti-Monarchists such as Robespierre and Saint Just called for the immediate execution of Louis, with some urging the assembly not to try him at all, but kill him without trial.

The verdict was a foregone conclusion: the radical majority of revolutionaries in the National Assembly convicted The King of treason against the French Republic – despite the fact that Louis XVI had never sworn loyalty to it or acknowledged the abolition of the Monarchy – on 20th January. Louis XVI was sent to the guillotine on 21st January 1793.

The King went to his death with great calm and noble dignity, pardoning all those who took part in it and praying that France might be spared further political violence.

The execution was scheduled to take place on the following morning. That evening the King was allowed to spend some time with his family and wife. He explained to his children what was going to happen to him, and he asked Prince Louis Charles, his heir, not to take revenge on the French people for this. As he left his family, he told them that he would come back to see them in the morning: Louis knew that would not be possible, but he felt it would be comforting for them to think they would see him again.

It is noted Louis ‘walked resolutely forward and straight up the steps’ to the guillotine. He marched across the platform and silenced the drummers standing at the base of the scaffold with just a look. Then he addressed the crowd, the final words of a King to his people.

“I die innocent of all the crimes laid to my charge; I pardon those who have occasioned my death; and I pray to God that the blood you are going to shed may never be visited on France.”

On the order of an officer, the drummers commenced once more, and the rest of Louis’ address was silenced.

Voices in the crowd could be heard encouraging the executioners to perform their task. Just a few moments were needed to put Louis XVI on the block and separate his head from his shoulders with the powerful blow of the blade. Silence descended for a moment, before cheers erupted when soldiers raised the head of The King for the crowd to see.

Marie Antoinette, kept afterwards in a state of close guard with no privacy, deeply mourned her husband. By this time her once-splendid hair had turned white from stress and anxiety.

It was only a matter of time before the hatred and fury of the radical revolutionaries returned to the person of the hated Queen. Shortly after The King’s murder, she was removed from her children, and imprisoned in a dank and foul-smelling room in Paris’ Conciergerie prison. In October 1793, she was charged with treason against the Republic and conspiring with Austria (her late brother Leopold II had been the Archduke of Austria and Holy Roman Emperor, and her nephew, Francis II, occupied the position at the time). She was permitted no lawyer to speak in her defence. 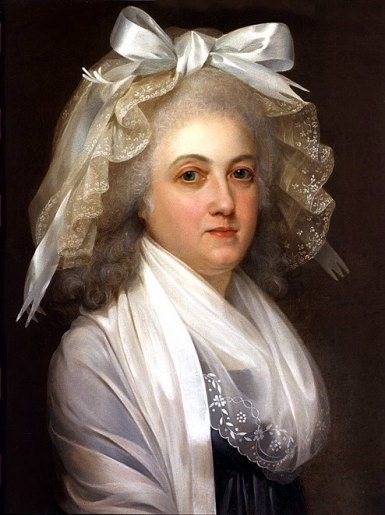 Marie Anotinette and her grey hair in the latter stages of her life in Temple prison. Wikimedia commons

After a two-day trial, beginning on 14th October 1793, Marie Antoinette was convicted by the revolutionary tribunal of treason. Her inquisitors even forced her son, Louis XVII, to testify against his mother and accuse her of molesting him, which even the women of Paris (who hated her) felt went too far.

When asked what her response was to the charges against her, The Queen ignored them, except the charge of incest with her own son, which she vehemently and eloquently denied:

“I thought that human nature would excuse me from answering such an imputation, but I appeal from it to the heart of every mother here present.”

Like her husband before her, Marie Antoinette was allowed no appeal. Her jailers refused her request to see her children one last time, so she spent her last hours in prayer and writing this letter to her sister-in-law Princess Elisabeth, who would ultimately follow The Queen to the guillotine in 1794:

“It is to you, my sister, that I write for the last time. I have just been condemned, not to a shameful death, for such is only for criminals, but to go and rejoin your brother. Innocent like him, I hope to show the same firmness in my last moments. I am calm, as one is when one’s conscience reproaches one with nothing.

“Let my son never forget the last words of his father, which I repeat emphatically; let him never seek to avenge our deaths.

“I pardon all my enemies the evils that they have done me. I bid farewell to my aunts and to all my brothers and sisters… Let them at least know that to my latest moment I thought of them.”

The tomb of Louis and Marie Antoinette at Basilique St Denis. (Julien/Flickr)

Queen Marie Antoinette was executed on the ‘Place de la Révolution’ on 16th October 1793, almost nine months after her husband.

Following the restoration of the Bourbon monarchy in 1814, Louis XVI’s brother King Louis XVIII ordered his late brother and sister-in-law to be buried in a magnificent tomb befitting their royal status. Here they lie to this day.

Tell me about…Counsellors of State