Latest posts
Countess of Wessex submits her own photo from volunteering for Kate’s ‘Hold...
Prince Charles: it’s ‘the most ghastly thing’ that people have died without...
Mini Trooping the Colour 2020 will be held at Windsor for Queen’s...
Royal Rewind: Edward VIII marries Wallis Simpson in France
Duchess of Cornwall hails volunteers as ‘backbone of our country’ at start...
The Queen invites photographer to Windsor to see her horse riding
The Queen’s Jewellery: porcelain lily of the valley brooch
‘We dyslexics look at things differently’ says Princess Beatrice
Want to go behind the scenes of the Royal Dress Collection?
The Queen’s Jewellery: Girls of Great Britain and Ireland tiara
Home HistoryHistorical news Henry VIII’s missing tiltyard towers uncovered at Hampton Court
Historical newsThe Tudors

One of the five tiltyard towers of Henry VIII’s jousting arena has been discovered at Hampton Court Palace.

A puzzle that has remained unsolved for decades, the location of one tower was found after a team of archeologists uncovered a green-glazed tile floor, during preparation work for a new outdoor exhibition for the spring, the Magic Garden. 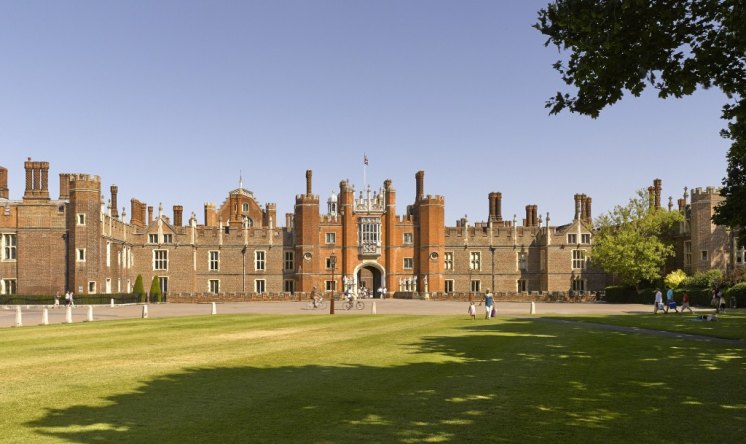 Some of the earliest banqueting houses in England, the towers built at the height of Henry VIII’s reign, in 1537 for the birth of his only son, Edward VI. It is thought they were used as viewing platforms for spectators of jousting tournaments, hosted on feast days. Records show the earliest mention of these competitions to be in 1557, under Mary I.

The green tiles may now help the team find the other three towers, and be able to piece together their story. One of the towers survived, but has been altered much over the centuries, and now forms part of the Tiltyard Cafe. A few gilded lead leaves, also discovered alongside the tiles, point to the regal decor of the structures.

After tournaments gradually fell out of fashion, the towers became multi-purpose storage spaces, Historic Royal Palaces explains. They housed everything from the King’s pigeons to two of Queen Henrietta Maria’s priests, in quarantine after a plague outbreak.

The towers were largely demolished in the 1680s when William and Mary moved in, wanting to create their own glorious palace with the help of Sir Christopher Wren. But images of the structures have been featured in art and images of Hampton Court since their completion, and intrigued historians since.

Dan Jackson, curator of historic buildings at Historic Royal Palaces, said:  “We’re extremely excited to have uncovered the remains of one of the lost tiltyard towers – a mystery that’s been puzzling our predecessors for decades.

“Being able to plot the location of this tower will open up new avenues of research, perhaps finally enabling us to locate the others, and to better understand these exceptionally significant buildings, which we think were some of the earliest banqueting houses of their type built in this country.”

The new Magic Garden feature is to recreate the five towers for an outdoor children’s play area – and it turns out their planned location was almost spot-on.

During work to repair a sinking floor early in 2015, in what is now the Royal School of Sewing and Needlework based at Hampton Court, archaeologists uncovered the foundations to The Queen’s Apartment at Hampton Court, built for Anne Boleyn in the 1530’s. It seems all the palace’s secrets have not yet been given up…

The White Ship, William Adelin and the England...