Read our latest posts
‘A world without books is unimaginable’ Duchess of Cornwall says on World Book Day
Books give me ‘reassurance’, says Princess Beatrice in blog for World Book Day
Duchess of Cornwall visits Croydon vaccination centre & says Prince Philip is ‘improving’
Countess of Wessex announces winner of Queen’s Award for Design & talks her own style
‘It might be quite alarming’ – Queen jokes statue of herself in Adelaide will scare locals
Prince Philip transferred to St Bart’s for cardiac tests & further treatment
Prince of Wales shares ‘profound’ appreciation for Royal Mail workers
Prince William and Kate show support for vaccines in call with vulnerable Brits
St John’s vaccination group gains new volunteer: The Countess of Wessex
Queen encourages people to have Covid-19 vaccines – it ‘didn’t hurt at all’ she says
Home HistoryHistory postsThe Windsors British royal weddings through the ages – from George VI to the Cambridges
The Windsors

From Queen Victoria’s to Grace Kelly’s, royal weddings have always been a cause for national celebration, as two commit to one another for the rest of their lives. They are some of the most memorable occasions in royal history – take a look a royal weddings from across the ages.

When one talks about British royal weddings, most people think of Prince Charles and Lady Diana’s in 1981. Earlier marriages were also caught on camera, but because of new technologies these occasions became increasingly popular.

The story of the modern royal wedding begins with Prince Albert, Duke of York, who married Elizabeth Bowes-Lyon on 23rd April 1923 at Westminster Abbey. She was the daughter of The Earl and Countess of Strathmore and Kinghorne – and therefore a suitable match for a Royal – but she rejected his first two proposals over fears of what royal life might mean.

In a break with tradition, it was decided their wedding would be a public affair at Westminster Abbey instead of at a chapel, such as St James’s, where Queen Victoria said ‘I do’ to Prince Albert. It is believed this decision was taken to lift the spirits of the nation following the ravages of the Great War (1914 – 1918).

Until the 20th century, the Royal Family had married elsewhere. Westminster Abbey had always been used for coronations, not weddings.

It was after The Duke and Duchess of York’s wedding that the Abbey became the venue of choice for royal nuptials.

For the first time, cameras were in London to properly capture the carriage processions, as the young bride travelled to the ceremony.

The next couple to be married at Westminster Abbey was Prince Albert’s younger brother, Prince George, Duke of Kent and his fiancée, Princess Marina of Greece. It was November of 1934, and the Princess glittered in diamonds in the foggy autumnal weather, more than most royal brides seen in the last few decades.

George and Marina’s wedding was more low-key, since he was a younger son of George V’s and therefore had little impact upon the line of succession, but it was still a reason for the country to celebrate after the economic downturn of the late 1920s.

Princess Elizabeth and was the youngest bridesmaid of the wedding party and the wedding was followed by a Greek ceremony in the private chapel at Buckingham Palace.

However, another, less expected royal wedding took place across the Channel near Paris at the Chateau de Cande in 1937, when The Duke of Windsor, married Wallis Simpson. No members of the Royal Family present for the ceremony, as George VI, his brother, forbade any members of the family to attend.

The Church of England refused to sanction the union, and so a County Durham clergyman, the Reverend Robert Anderson Jardine offered to perform the ceremony, and the couple accepted. 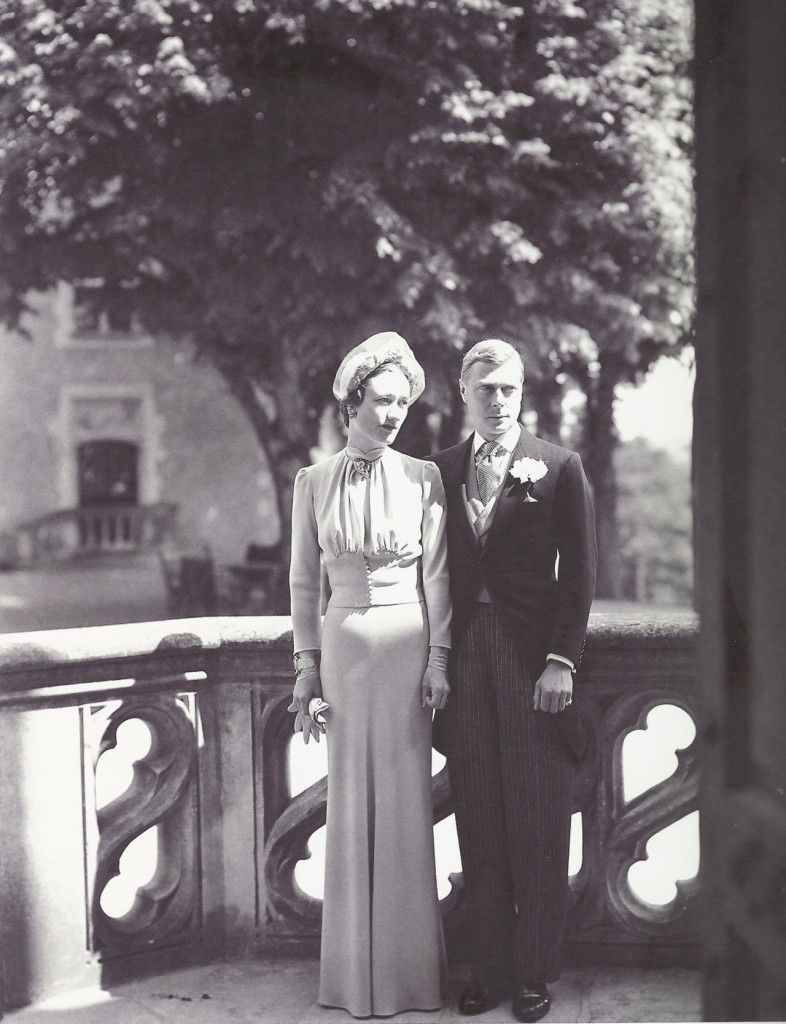 The Duke of Windsor married Wallis Warfield (Simpson) in a private ceremony near Paris. No Royals attended. (Lost Gallery)

The young Princess Elizabeth and Prince Philip were married on the 20th November 1947 at Westminster Abbey. The ceremony was recorded and broadcast by BBC Radio to 200 million people around the world.

Princess Elizabeth did her own make up for the wedding and returned all the clothing coupons people had gifted her to make her dress as it was illegal. A little known fact about the wedding is that Elizabeth’s tiara actually snapped shortly before the ceremony, and some clever hairstyling was required to keep the piece in place.

Philip had renounced his Greek and Danish titles in order to marry Elizabeth, and converted from Greek Orthodoxy to Anglicanism.

By the time Princess Margaret and Anthony Armstrong-Jones married in 1960, the television age had begun. Their wedding, too, took place at Westminster Abbey.

The next marriage was of Prince Charles and Lady Diana. They broke the tradition and married at St Paul’s Cathedral.

It was hailed the wedding of the century, with images beamed around the world within seconds of the event taking place. The couple even started the tradition of kissing on Buckingham Palace’s balcony, to the cheers of the crowds.

His sister Princess Anne and brother Prince Andrew, Duke of York both married their partners at the Abbey, in 1973 and 1986 respectively.

These two occasions were celebrated with the same joy and pomp as that of the heir to the throne, since they were the elder children of The Queen and Duke of Edinburgh.

However, tiny Crathie Kirk on the Balmoral Estate was used for the second wedding of Princess Anne who married Commander Timothy Laurence in 1992. It was a less formal family occasion, noted by the flowers in Anne’s hair instead of a tiara.

St George’s Chapel at Windsor Castle was used for both the 1999 marriage of the youngest son of Her Majesty, Prince Edward to Sophie Rhys-Jones and the 2005 marriage of The Prince of Wales to Camilla Parker Bowles.

Charles and Camilla were married at Guildhall but had a blessing the chapel afterwards, which The Queen and Prince Philip attended.

In 2011, Westminster abbey was used again for the wedding of The Duke and Duchess of Cambridge.

Catherine chose Sarah Burton for Alexander McQueen for her bridal gown and crowds flocked in their thousands to see the procession to the Abbey, and then to Buckingham Palace for the reception. An estimated 2 billion people watched the ceremony on TV.

Royal Rewind: The Earl and Countess of Wessex’s...

---- Marcella no longer writes for The Crown Chronicles ----- Marcella Busuttil from hal Safi Malta. She graduated in 2011 and obtained a B.A degree in Maltese and Linguistics. Her full-time Job is of an Assistant Teacher. She is also a TV presenter in Malta. She hosted several TV documentaries, even about the British Royal Family. She wrote and did the research of the programme 'Mill-Familja Rjali'. (The Royal Family) Presently, she writes on this website.