This brooch features one large pear shaped diamond suspended from a square cut stone. Together they create a rather impressive brooch. It is known as the Cullinan III & IV brooch, as the square diamond on top is the fourth Cullinan stone, and the pear shaped diamond on the bottom, is Cullinan III. III & IV are 63.6 carats and 94.4 carats respectively. Sometimes III & IV are known as the Third and Fourth Stars of Africa, or ‘Granny’s Chips’.

The Cullinan diamond, a whopping 3,106 carats, was named after the chairman of the mining company that found the stone, Thomas Cullinan. 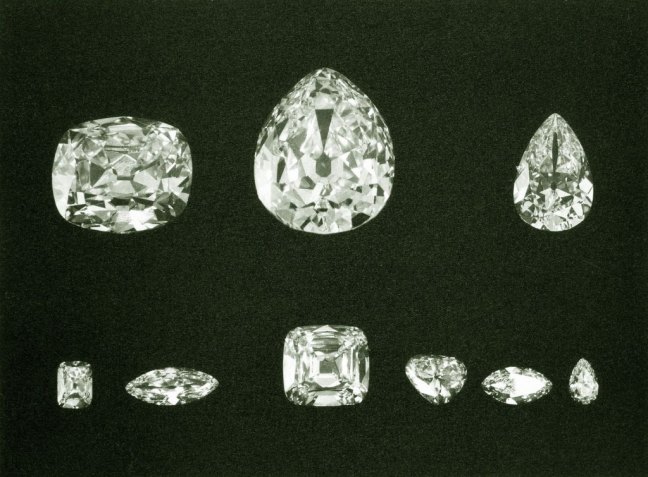 III and IV seemed to be Mary’s favourite of the Cullinan stones; these two were temporarily set in the crown Mary had made for her coronation in 1911 – the pear-shaped diamond was on the top cross, while the square diamond was placed directly on the base of the crown, sitting proud in the centre.

It is unclear, but Mary put at least one of the diamonds in the Delhi Durbar Tiara made for her for the accession celebration. At least once, Mary used stone III as a pendant on the Ladies of India emerald necklace, and sometimes used it on Victoria’s coronation necklace, instead of the Lahore diamond; you can see the small loop at the top of the brooch. 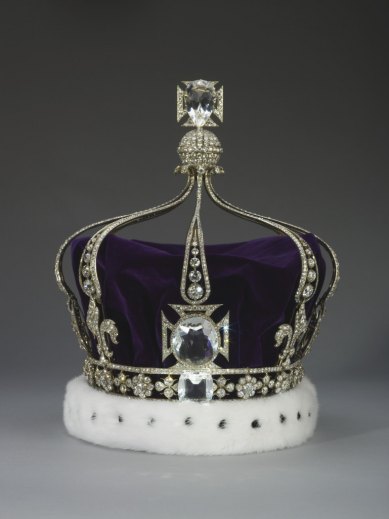 Mary wore this brooch to her children’s weddings and Princess Elizabeth’s wedding in 1947; she also saw George VI crowned in this piece, wearing it to his coronation in 1937.

All of the smaller Cullinans (except I and II) were kept by Mary until her death in 1953, when her granddaughter Elizabeth II inherited them. 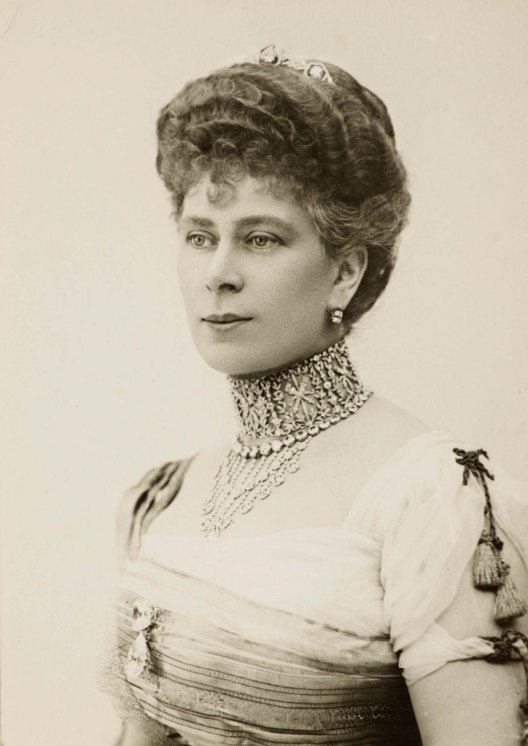 Whilst in possession of our current Queen, they have seldom been used, as the stones do make a rather large and ostentatious brooch; The Queen is known for her simple tastes and most of her brooches reflect this.

However, The Queen did wear III & IV when visiting Asscher’s on a State Visit to the Netherlands in 1958. Asscher was the mason that cleft the original diamond. Louis Asscher, who had witnessed the cutting of the original diamond in 1908, was there to see Her Majesty. The Queen unusually removed the brooch so Mr. Asscher could have a better look (which was said to have reduced him to tears) and she called the brooch ‘Granny’s Chips’. As Order of Splendour points out, when compared to stones I and II, a brooch from III & IV are just chippings! This is a nickname that has stuck for this brooch, but has also become something of an umbrella term for the other Cullinan stones that are in The Queen’s collection.

One of the last times we saw of them was at the Diamond Jubilee Thanksgiving Service. Also in 2012, the brooch featured in the ‘Diamonds: A Jubilee Celebration’ summer exhibition at Buckingham Palace, and in Hugh Robert’s book, ‘The Queen’s Diamonds’. In January 2018, however, we saw The Queen in piece (above) for a documentary, ‘The Coronation’, in which she noted that it was the first time ‘Granny’s chips’ had come face to face with another Cullinan counterpart in the Imperial State Crown.

Absolutely beautiful, loved the show and appreciated the Queen being so kind as to share with us the beauty and regalia of the Crown.

Wildlife and Wessex Yeomanry for Prince Edward in the West Country

Royal Rewind: the wedding of Zara and Mike Tindall