The Countess of Wessex had a busy day of engagements in Cheshire on Monday this week. Stepping out looking extremely stylish, Sophie paid a visit to three centres close to her heart.

Sophie visited the Brainwave Northwest Therapy Centre in Warrington as President of the charity. She was there to mark their 10th anniversary.  The royal visitor was welcomed to the centre by Her Majesty’s Lord-Lieutentant of Cheshire, Mr. David Briggs.

The Brainwave Centre provides educational and physical therapies to children who live with disabilities to help them gain a greater degree of independence and unlocks their potential. The children and young adults who are helped by Brainwave have a range of conditions, including autism, brain injuries such as cerebral palsy and genetic disorders, such as Down’s Syndrome. The centre aims to improve mobility, communication skills and learning through a wide range of educational and physical therapies. 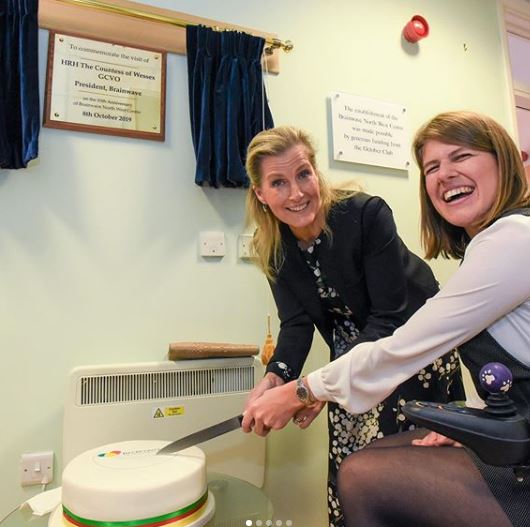 Sophie celebrates the 10th anniversary of Brainwave by unveiling a plaque and cutting a cake! (The Royal Family)

The Countess met with therapists to learn about the important work the centre provides for children and their carers. Brainwave uses physiotherapy, occupational therapy, speech and language therapy and educational therapy to create unique programmes that are specifically designed to suit each child’s individual needs. Sophie, looking extremely upbeat, acknowledged the vital work performed by the centre.

Whilst at the centre, Sophie paid a visit to one of the centre’s multi-sensory rooms where she met children and parents who benefit from the support of Brainwave. Here she was able to see the therapies in action. 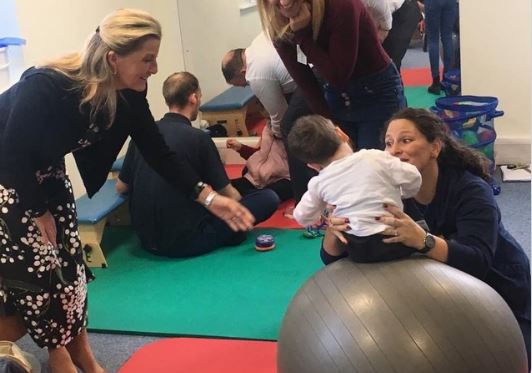 During the afternoon, Her Royal Highness who is President of Girlguiding visited the Cheshire Forest Pettypool Activity Centre in Northwich. The centre is set in 17 acres of woodland in the heart of Cheshire. Pettypool is a girl-guiding centre but can also be used by other organisations, such as schools.

Sophie officially opened the new £1 million residential building, The Lookout, by unveiling a plaque and planting a tree. This fantastic new facility has eight en-suite bunk bedrooms. It houses 40 people – 30 girls and up to 8 adults – and has a specialist accessible bedroom.

We were honoured & delighted to be joined today by HRH Sophie Wessex, President of @Girlguiding. She performed the official opening of our new building ‘The Lookout’. We were also joined by @Chief_Guide. HRH unveiled a plaque & planted a tree. We’ll have official photos soon! pic.twitter.com/V2TPbnag6Q

Pettypool offers a wide range of facilities for indoor and outdoor activities.  These include an assault course, a zip wire, geo-coaching, fitness trails, pioneering skill courses, giant games and so much more for youngsters to enjoy!

For her last engagement of the day, the Countess visited Tarporley War Memorial Hospital to join in their centenary celebrations. The hospital is the only hospital of its kind in the UK run by a charitable trust. It is at the heart of the community and has been since it’s inception in 1919. The hospital is one of a few remaining centres that specialises in inpatient and intermediate care of the elderly.

Sophie met with patrons, trustees, staff, volunteers, fundraisers and supporters of the hospital. Her Royal Highness enjoyed meeting the veterans at the hospital and took time out to chat with them. 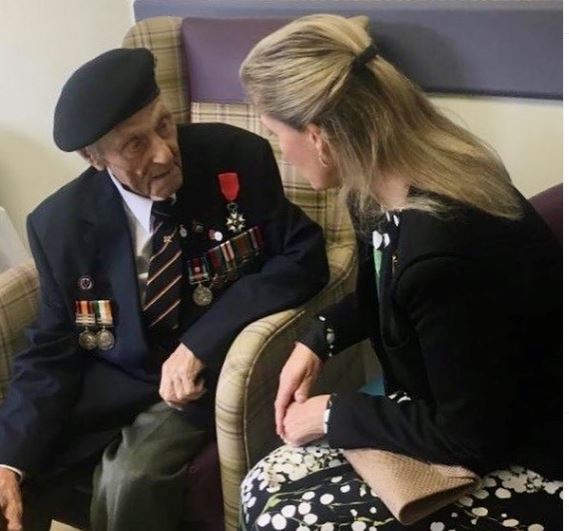 As Sophie left the hospital, she stopped to talk to the pupils of Tarporley Church of England Primary School who were waiting to greet her outside the hospital.

We have some more wonderful pictures from yesterdays royal visit. #RoyalFamily #royalvisit pic.twitter.com/CFe1jIXl0J

Proud to talk and read the Royal Contributions through my lifetime.

Books give me ‘reassurance’, says Princess Beatrice in blog for World Book Day