The Prince of Wales and the Duchess of Cornwall visited Cheshire today for both joint and individual engagements. Despite a busy day meeting the local community, Charles even had time to pop into a local pub, aptly named ‘The Prince of Wales’, for a sample of some beer!

Camilla’s first stop was HMP Styal in Wilmslow; the Duchess was there to learn about the Books Unlocked scheme, which is organised by the Booker Prize Foundation and Literacy Trust. Camilla is Patron of the Literacy Trust, a position she has held since 2010.

Books Unlocked aims to inspire a love of reading amongst prisoners, providing them with free copies of books which have been short-listed for the Man Booker Prize. The authors of these books also visit prisons as part of the scheme.

The Duchess of Cornwall is meeting inmates at HMP Styal working at The Clink restaurant. They’re in the middle of gaining service NVQs. HRH has been told she won’t have to wear a hair net because the kitchen’s not open yet! pic.twitter.com/0xaNwFqyjq

The Duchess of Cornwall also spoke to those involved with the National Prison Radio, which forms part of the Books Unlocked programme. This is a free radio system which is broadcast into 80,000 cells in prisons and young offenders centres in England and Wales, serialising audiobooks and broadcasting author interviews.

In addition to learning about the Books Unlocked scheme, Camilla also visited the prison’s restaurant, run by The Clink Charity; the organisation trains prisoners in various restaurants to help them find employment in the hospitality industry after their release. In the restaurant at HMP Styal, prisoners work up 40 hours per week, the equivalent of a full time job; as well as gaining practical experience, the prisoners work towards qualifications in food service and preparation.

While his wife was at HMP Styal, The Prince of Wales was visiting Quarry Bank, a site run by the National Trust, of which Prince Charles is President. Charles is well known for his love of heritage and nature conservation projects. Quarry Bank is a working cotton mill which led to the creation of an industrial community, and people still live there today.

Visitors can tour the Apprentice House and experience life as it would have for the poor children who worked in the mill during the early days of the Industrial revolution.

The Prince last visited the site in 2010, although the mill has been undergoing a restoration process since then. Today, the Queen’s eldest son was able to see how the restoration has progressed since his last visit, touring the gardens and also a worker’s cottage.

In addition to the Quarry Bank site, the heir to the throne also paid a visit to Styal primary school, where he was welcomed by members of the school’s steel pan band and a tap dancer.

Charles highly praised the children, saying that they performed “brilliantly”. Before leaving, the grandfather-of-two was presented with a book which one of the school’s pupils had written for Prince George and Princess Charlotte; Charles promised to share it with his children the next time he read them a bedtime story.

The Prince of Wales also visited Wilmslow’s Norcliffe Unitarian Chapel, where he was reunited with Alan Myerscough, who used to be the organist at Highrove, where Charles and Camilla have their private residence.

The couple also had a joint visit to the town of Congleton, which is celebrating 700 years of its Mayorality. Charles and Camilla were welcomed by large crowds, many of whom were waving flags which had been specially made to mark the occasion. The royal guests visited The Old Saw Mill, which is a community hub used by many local groups in the Congleton area.

Charles and Camilla had the chance to meet with members of some of these groups, including Meals on Wheels and the knitting club. They also spoke with volunteers who cooked Christmas dinner at the Mill for twenty residents who had nowhere else to spend the day.

To celebrate the 700th anniversary of Congleton’s Mayorality, Charles and Camilla visited the Town Hall, where they were welcomed with a guard of honour made up of local air and army cadets, as well as Scouts and Guides. Camilla was presented with flowers, and the couple also received a Congleton Beartown Bear. To mark the occasion, the couple unveiled a special plaque and signed the Town Hall’s Visitors Book. 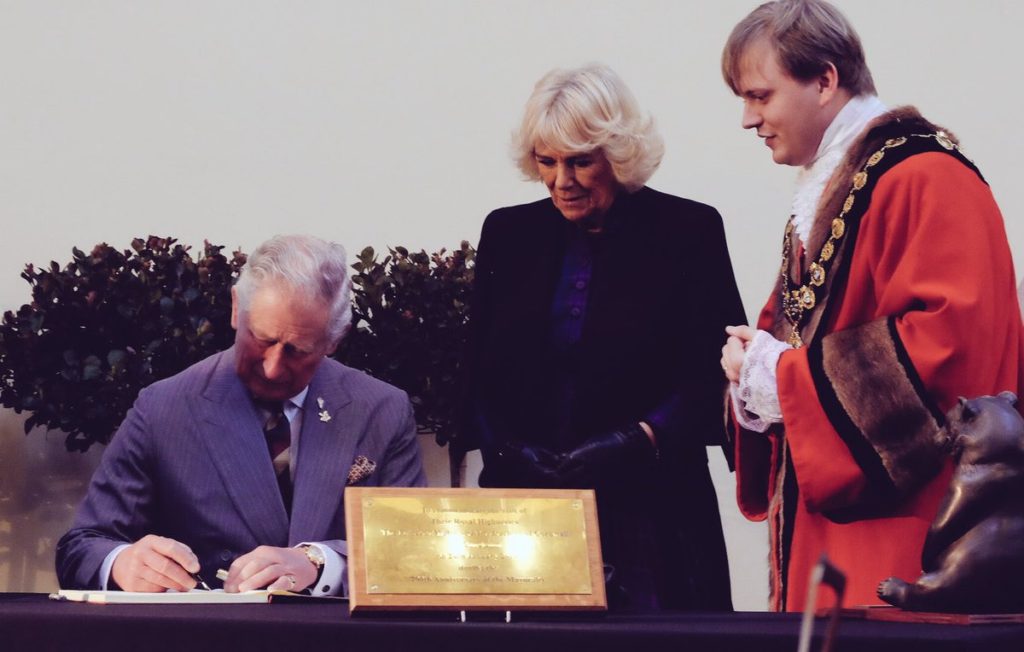 The Prince of Wales also said a few words, thanking the community groups involved in today’s visit for their efforts in making the day special.

During the day, the eagle-eyed Prince of Wales also paid an impromptu visit to his namesake pub, where he sampled some beer.  Joking with the regulars and media, Charles said: “If there’s anywhere I can get a free drink, it’s a pub called The Prince of Wales!”

The Prince of Wales speaks to crowds gathered outside his namesake pub, where he popped in for a drink (Clarence House)

PrevPrevious articleThe Prince of Wales Investiture: Prince Charles prepared for Kingship
Next articleDuchess Camilla gives OAPs who suffered two robberies in one week a day they will never forgetNext